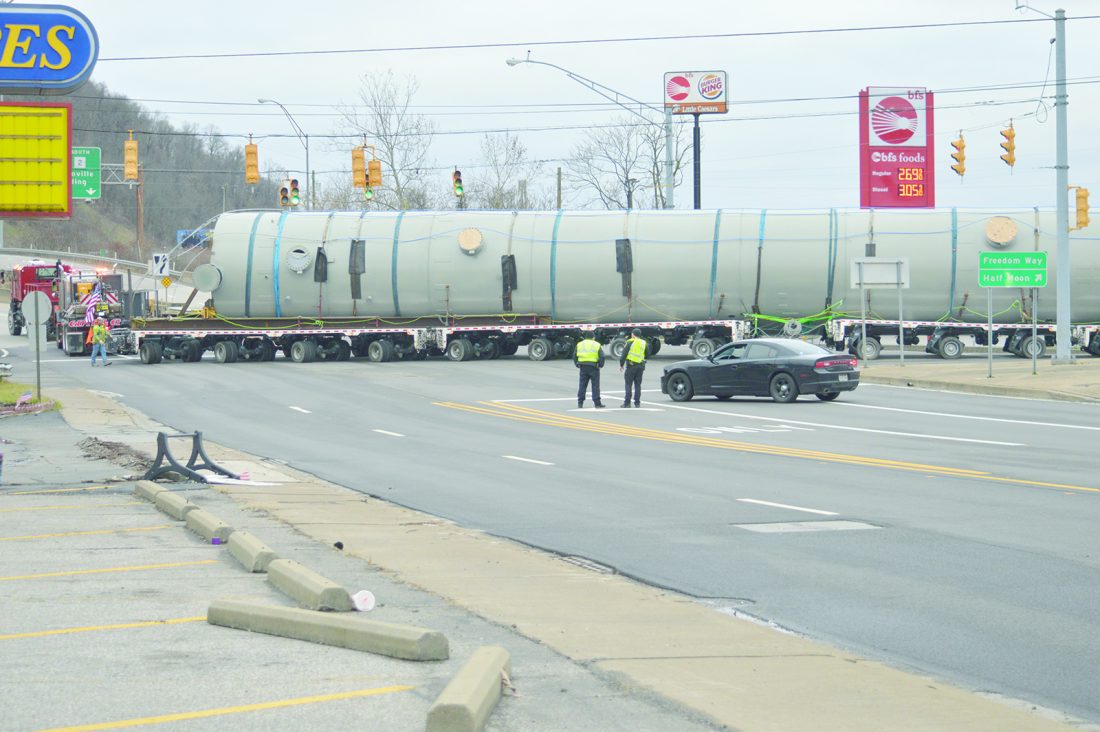 COMING THROUGH — Traffic in and out of Weirton ground to a halt Sunday morning as a superload weighing nearly 970,000 pounds made its way through the Main Street-Freedom Way intersection. Accompanied by police and support vehicles, the superload is headed to the Markwest fractionater in Hopedale. -- Linda Harris

WINTERSVILLE — Due to a mechanical issue, the slow-moving superload inching its way from Weirton to Hopedale had to make an unscheduled stopover in Wintersville Sunday.

Ohio Department of Transportation District 11 Public Information Officer Lauren Borell said the superload was parked overnight by State Park Motors on state Route 43 after the trailer broke and had to be welded,

“For safety purposes they only drive during the day, so it had to stay put for the night,” Borell said, pointing out the superload is expected to resume its journey to Hopedale Monday at 9 a.m.

The superload, which measures 20-feet wide, 17-feet 4-inches tall, and 305-feet long and weighs in just shy of 970,000 pounds, got a late start Sunday due to the high winds that moved through the Weirton-Steubenville area in the early morning hours Sunday.

The convoy arrived at the Freedom Way-Main Street intersection in Weirton around 9 a.m., clearing Veterans Memorial Bridge a little over an hour later.

Borell said the transport team is “paying special attention to public safety when crossing bridges and making turns on the superload’s route.” The transport team is also planning the move to avoid peak travel times to minimize the interference with traffic, she said.

The equipment is bound for the Markwest fractionater in Hopedale.

Traffic is being controlled via rolling roadblocks. Motorists should expect delays and various intermitten ramp and loan closures, Borell said.

Additional superloads are scheduled to make the trek from Weirton to Hopedale on Jan. 19 and 26.