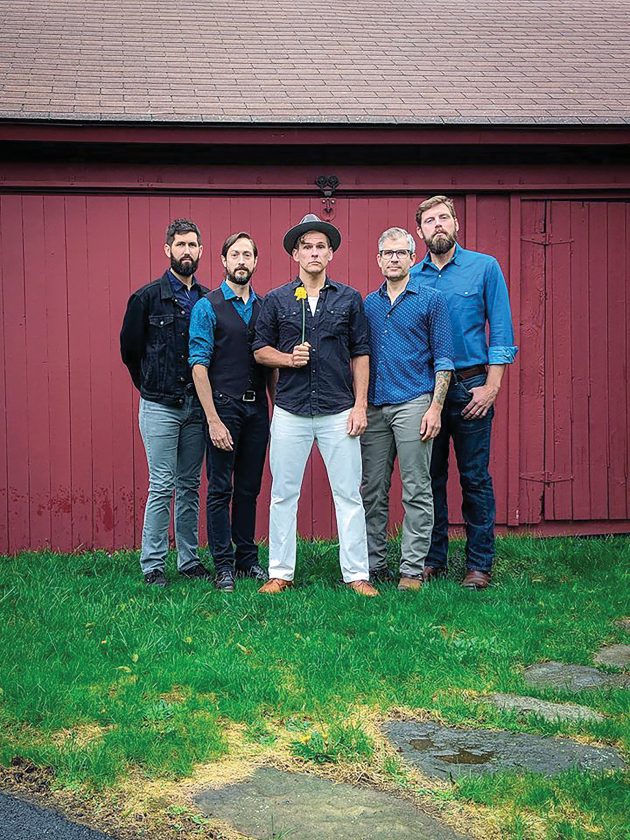 The Steel Wheels will be among the many performers. -- Contributed

NEW MANCHESTER — Montani Semper Liberi, a three-day celebration of music, the arts and cultural heritage, will return to the Oak Glen High School complex for a sixth consecutive year when it unfolds March 20-22.

Once again, the event will feature a roster of nationally renowned bluegrass, folk, jazz, blues, Celtic and Americana touring artists, as well as a wide array of local performing artists. There will be between 17 to 20 Little Theatre/ Main Stage performances spread out over three days and four sessions. A family-friendly event, all students age 18 and under will receive free admission to all main stage performances. Those age 12 and under must be accompanied by an adult.

In addition to the Little Theatre offerings, the Commons Area will be set up to showcase the talents of area crafters, vendors, authors and artisans. Plus, the Hall Gallery of Visual Arts will have the works of local and regional artists and photographers on display. The Porch, an alternate stage, will be utilized throughout the weekend with a full schedule of family-friendly entertainment. Admission to all Commons Area, Hall Gallery and Porch activities, events and displays will be free to all ages.

Adult passes, both single session and full event, for the Little Theatre Main Stage shows can be purchased online at www.musicandartatoakglen.com. They also can be purchased by making a check payable to: “M.S.L. — Music & Art” and mailing it to 39 Golden Bear Drive, New Cumberland WV 26047. A self-addressed envelope must be included. Passes also can be purchased at Oak Glen Middle School during regular school hours. Single session passes are $20. Admission to the midday Session II on March 21 will be free to all. For information, call (304) 374-7474.

Touring headliners among this year’s Main Stage performers include:

¯ The Steel Wheels: Thanks to a robust tour schedule and their impeccable sound, this veteran string band from Virginia’s Blue Ridge has earned the “Band Most In-Demand” status of fans and peers alike. “Few groups have come as far in such a brief period of time as the Steel Wheels…” according to NPR’s Mountain Stage.

¯ Driftwood: A quintet familiar to anyone who follows the Americana music scene, Driftwood is the hands-down favorite of those who flock to their frequent Purple Fiddle (Thomas, WV) shows. With a never-ending tour schedule and a reputation for “killer” live shows, this upstate New York-based band has built a very solid underground fan base.

¯ The Po’Ramblin’ Boys: The International Bluegrass Music Association Emerging Artist of the Year and a 2020 Grammy nominee for Bluegrass Album of the year, this Tennessee Smoky Mountain-based band is “the real deal” and takes great pride in being ambassadors of their genre.

¯ The Lowest Pair: The duo of Kendl Winter and Palmer T. Lee are defined by their “world-class banjo riffs, timeless folk songs and haunting vocals.” (KEXP, The Current) “If you listen to no other bands or musical outfits in the Americana genre … listen to The Lowest Pair. This duo isn’t interested in merely making music of a moment that’s soon forgotten — these are songs well-lived in that aspire to last long after their writers have shuffled away.” (No Depression)

¯ Amythyst Kiah: “…one of roots music’s most exciting emerging talents, blending a deep knowledge of old-time music with sensibilities spanning classic country to contemporary R&B.” (Rolling Stone Magazine) Her tune, “Black Myself,” was recognized as the Folk Alliance 2020 Song of the Year and a Grammy nominee for Roots Song of the Year.

¯ Sunny War: A product of a nomadic and unconventional childhood, a self-taught guitarist with a style reminiscent of Robert Johnson, lyrics reflective of her teen years on the streets of L.A. and Venice Beach, and a voice with all the melancholy found in Billie Holliday, “Sunny is going to blow your mind. She is like no one else.” (LA Weekly)

¯ Hillary Klug: A fiddle playing prodigy and National Buck Dancing Champion, Klug’s combined talents have made her an international celebrity. “There are good fiddle players, and there are good dancers, but I don’t know anybody in the United States who dances as well as she plays or plays as well as she dances.” (Jim Wood, five-time Tennessee State Fiddle Champion)

¯ The Drowsy Lads: They’ve been mainstays on the Irish music scene in the United States for more than 15 years, and their fire, exuberance and undeniable genuineness have earned them the distinction of “Best Irish American Band of 2018.” “They get the crowd on their feet and deliver a good time, every time.” (Jack Baker — Irish American News)

¯ C Street Brass: What began in 2008 as a small project among five friends, C Street Brass remains as committed as ever to connect lovers of the arts from all walks of life around a highly energetic and engaging concert experience. “C Street is the new sound, look and feel of the modern brass quintet.” (George Vosburgh, principal trumpet, Pittsburgh Symphony)

¯ Vivian Leva and Riley Calcagno: It’s rare to find such mature and confident voices in such young artists, whose music springs so organically from a grassroots connection to the traditional music community in which they were raised. Rolling Stone listed Vivian among its “10 country and Americana artists you need to hear right now.” Riley spent his formative years in traditional music playing with the widely recognized band, The Onlies.

¯ Rasta Rafiki: Formed in Morgantown in the late 1989, Rasta Rafiki “strives to produce music that is equally appealing to the mind as well as the body … with the express purpose of promoting peace, equality and understanding in an ever desensitized world, while at the same time supplying a healthy dose of fun.” Through the years, the band gradually disbanded as members relocated across the country, but they reunite, on occasion, for special events.

¯ The Nick Horner Family: Returning to Music and Art at Oak Glen, Nick Horner performed at last year’s festival as part of the Nick and Luke duo. This time, it will be with a cast of characters rotating around the Brooklyn-based Horner. Expect roots rock and folk jazz with a tinge of the unpredictable.

¯ Bill Schilling with Rich and Kathy Small: Bill has been singing and playing various folk instruments — at least 20 with variations of several — for 50 years. Rich and Kathy are folk singers and instrumentalists from Canton. Together, they have been performing as a trio since about 2014 in a variety of settings and venues.

¯ ELHS Renaissance Singers: Under the direction of Lisa Ensinger, they will be performing some of their annual “Nights on Broadway” celebration.

¯ In a special two-song presentation, well known local artist Doug Smith will open the fourth and final session of the festival on March 22.

“Now in its sixth year, we’re very proud of our unique festival and what it offers to people of all ages throughout our Tri-State Area,” noted Matt Cashdollar, MSL — music and art committee member.

The event is billed as a “celebration of music, the arts and our cultural heritage” and has evolved from a one-day event to a three-day festival.

“The roots of the festival actually go back to the mid-1990s and the frequent individual concerts that were hosted at Westgate Auditorium in East Liverpool, shows that featured legendary performers in folk, jazz, blues and traditional music, artists such as Richie Havens, Tom Paxton, Maynard Ferguson, R.L. Burnside, the Count Basie Orchestra and many more,” Cashdollar said. “The common theme from those earliest shows to the present format has been that students have been involved in varying capacities, from performing to maintenance to the actual production of each and every endeavor,” he said.

“What makes our festival unique from similar offerings found throughout the country is the young people component, students benefiting from shared experiences alongside world renowned performing artists,” Cashdollar continued.

“Ours is truly a school (students) and community collaborative effort.” It involves more than 100 Hancock County students each March in addition to hundreds of students from neighboring districts throughout the upper Ohio Valley and nearby Western Pennsylvania who have contributed their time and talents to the festival since its inception.

“At a festival, you will find students serving in the following roles, working seamlessly side-by-side with the professionals — emceeing our Little Theatre main stage sessions; performing on both the main and alternate stages; taking care of the needs of touring musical artists, as well as our guest vendors; video documenting the festival performances and interviewing the musicians; overseeing their own vendor/crafter tables; managing the Little Theatre stage and spotlights; and displaying their own paintings, sketches and photographic works, side-by-side with the professional Hall Gallery artists,” Cashdollar explained.

Cashdollar is part of a committee of approximately 20 like-minded Tri-State Area citizens who plan and organize the event each year.

“It entails a year-round effort of fundraising and coordination to stage the annual one-weekend event,” he said.

“Our committee is comprised primarily of current and former school teachers, as well as parents whose children have contributed in some way to the festival.”

The event “survives from year to year thanks to the generosity of many private individuals, small and large business owners, endowments and community service organizations and the support of our county commissioners, as well as through numerous creative fund-raising initiatives. We struggle each year to climb out of a financial hole until we get every fee paid, then get ourselves into another similar situation and begin the climb again. An arts-oriented grass roots organization, we are extremely appreciative of our community’s support.”