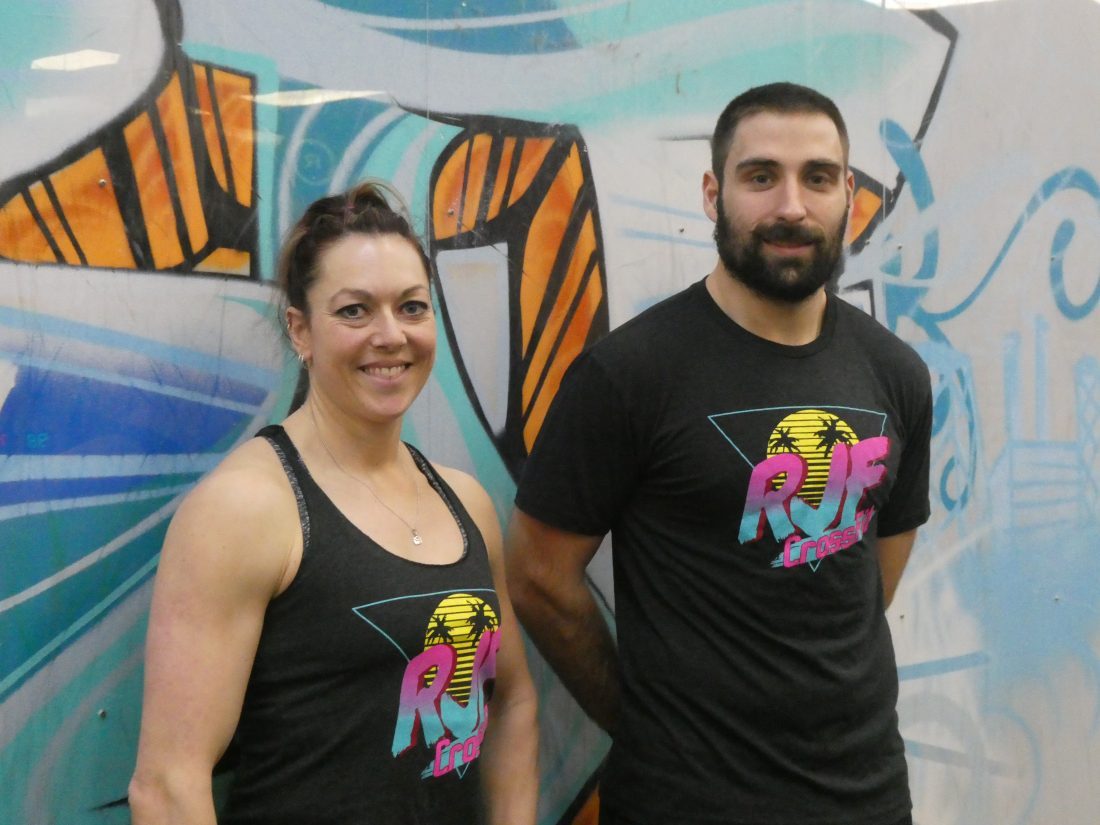 COMPETING IN MIAMI — Christa Giordana, left, manager of the fitness facility at the Ryan Ferns Healthplex in Benwood, and member Zack King will compete at the Wodapalooza CrossFit Festival, happening this weekend in Miami. -- Staff photo

BENWOOD — Local CrossFit enthusiasts are preparing for whatever challenges might face them when they compete at a national CrossFit event this weekend.

A total of eight athletes from the Ryan Ferns Healthplex in Benwood will be traveling to the Wodapalooza CrossFit Festival set for Friday through Sunday in Miami. Earlier this week, the athletes could be seen working out at such tasks as kettleball lifting, rowing, rope climbing, pushups and pullups and headstands to get ready for events.

CrossFit is a program based upon improving cardiovascular and respiratory endurance through stamina, strength, flexibility, power and speed. Weightlifting, cardio and gymnastics exercises are the focus, but participants in Wodapalooza won’t know their exact challenges until the competition starts, according to Christa Giordana, manager of the fitness facility at the Ryan Ferns Healthplex.

Also competing at the highest level will be Wheeling restaurant owner Mike Duplaga Jr. in the age 50 to 54 age group.

Giordana said often people not familiar with CrossFit see it in media, and they reluctant to try it based on the extreme workouts they observe.

She described CrossFit as “a different style of fitness” that won’t bore the participant over time.

“We have a lot of people who come into the Ryan Ferns Healthplex that are like, ‘I can’t do CrossFit,'” Giordana said. “But CrossFit isn’t what they see on TV that scares people.

“They come in and say, ‘I can actually do this,’ because it can be scaled and modified to every single fitness level. We have people 50 years old who have never worked out a day in their life, and they do CrossFit.”

There is a beginner level, she said.

Duplaga said he is a person who has worked out all of his life, but six years years ago he was looking for “something different” in fitness and exercise.

“I was getting bored with what I was doing,” he said. “Then somebody told me if I took CrossFit seriously, I could be good at it.”

He consulted an online coaching service to set him on a competitive track.

Giordana said CrossFit participation is attractive to many because it offers the athlete a sense of community and support in their fitness attempts.

“I think the fact there is so many of us going shows how strong our community is at the Healthplex, and how great things are,” she said. “It is rare to have such a large group of people qualify to go, and that comes from community.”