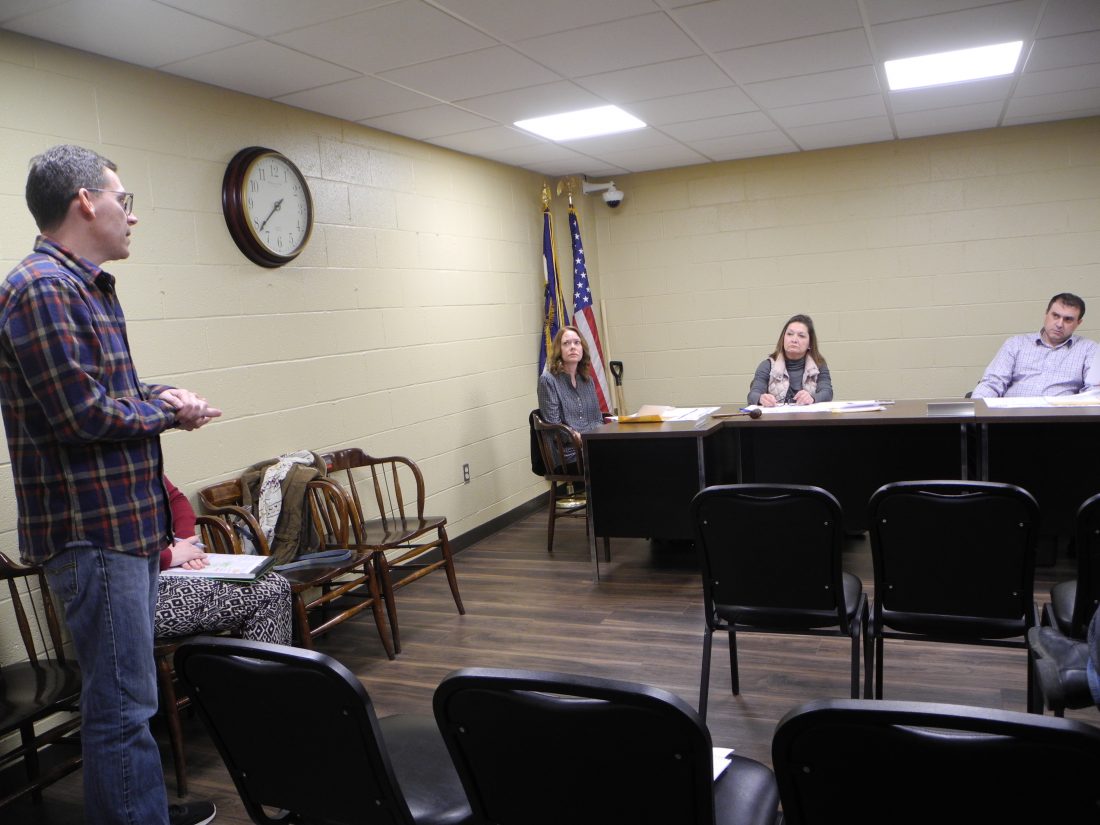 TALKING POT — The Brooke County Board of Health, on Monday, heard from Greg Gerdeman, a neuroscientist interested in opening a medical marijuana dispensary in downtown Weirton. Not entirely clear on its authority over such businesses, the board has tabled the matter, pending more information. -- Warren Scott

WELLSBURG — After hearing, Monday, from a couple interested in opening a medical marijuana dispensary in downtown Weirton, the Brooke County Board of Health moved to table the matter for more information.

One thing that appeared unclear to the board was its authority to approve or disapprove such businesses.

Mike Bolen, administrator of the county’s health department, noted the West Virginia Medical Marijuana Law passed by the state Legislature in 2017 states the opening of a medical marijuana dispensary must be approved by local health boards.

But he said he believes that language was inadvertently retained from the Pennsylvania law that West Virginia legislators used as a template because no other reference to the health boards is made and no guidelines for approving the dispensaries has been given to them.

Bolen noted the board won’t be involved in inspecting the dispensaries, with that task falling to the state’s newly formed Office on Medical Cannabis, a division of the state Bureau for Public Health.

Greg Gerdeman, a neuroscientist who worked in the industry for three years in Florida; and Erin Carey, a registered practical nurse; told the board the pair are among 199 applicants for 100 dispensary permits to be issued by the state.

He noted the state also will issue 10 permits for marijuana cultivators and 10 permits for businesses involved in processing the plant into drug form.

Gerdeman said he worked for three years for a Florida business involved in the cultivation, processing and sale of medical cannabis, first as a consultant and later, chief scientific officer, whose responsibilities included ensuring the drug was properly tested for use.

A former professor with a doctorate in pharmacology, he told the board he has conducted extensive research on the drug’s effects and effectiveness in treating various conditions.

“I’ve known dozens of physicians who have been working with patients and medical marijuana since 1996,” Gerdeman told the board.

Carey said while treating patients under long-term acute care and hospice care, she yearned for a way to better treat them and believes medical cannabis is the solution in some cases.

Bolen noted West Virginians wishing to use medical cannabis must obtain a recommendation from a state-approved doctor, who must undergo specific training about the drug; and apply for a state-issued card allowing them to purchase it.

The drug may be sold in the form of pills, oils, gels, creams, ointments and liquids that may be vaporized or nebulized.

Board member Mary Blum expressed concern that some may sell the drug to others.

Gerdeman said recreational users of the drug will be able to obtain it more cheaply on the street and strict security is required of the dispensaries.

He said operators of dispensaries must undergo criminal background checks and submit other documentation, including evidence they have experience in the industry.

Gerdeman and Carey suggested medical cannabis could be an alternative to opioids that have resulted in a high incidence of addiction and deaths by overdose.

Board member Joe Ierise, a local pharmacist, said there had been a high number of opioids prescribed but that number has fallen dramatically. He said he’d like to see evidence that medical cannabis is a solution to the opioid epidemic.

“I would like more proof of what is working,” he said.

John Cunningham, the board’s chairman, said, “If it can serve people who would really benefit from this, it’s a positive.”

But he said he and other board members would like more information before making a decision.

Gerdeman offered to share information he has submitted to the state, and the matter was placed on the board’s next meeting at 7:30 p.m. May 18 at the county courthouse.

County Commissioner A.J. Thomas, who attended the meeting, said county commissions have been given the power to put the operation of dispensaries in their counties up for a public vote, but there are no plans to do that.

Bolen said some health boards have discussed weighing medical marijuana dispensaries on a case by case basis, while others have considered approving all of them because their operations ultimately must be approved by the state.

¯Bolen said letters have been sent to local restaurants clarifying the board’s approval of a cigar bar in the Garden Grill Steakhouse in Weirton.

He said a countywide ban on smoking in restaurants remains in effect. He said an exception was made as the cigar bar would be enclosed and the spread of smoke to other areas prevented by an air handler system that has been successful in Pittsburgh.

Board members noted they’ve not received a report on a third party test of the system requested of the owner. Bolen noted reports were to be submitted quarterly and may be presented at the board’s May 18 meeting.

¯The board reappointed Cunningham as its chairman, Ierise as its co-chair and Dr. Joseph Depetro as its health officer.