Foster care bill on the move in House 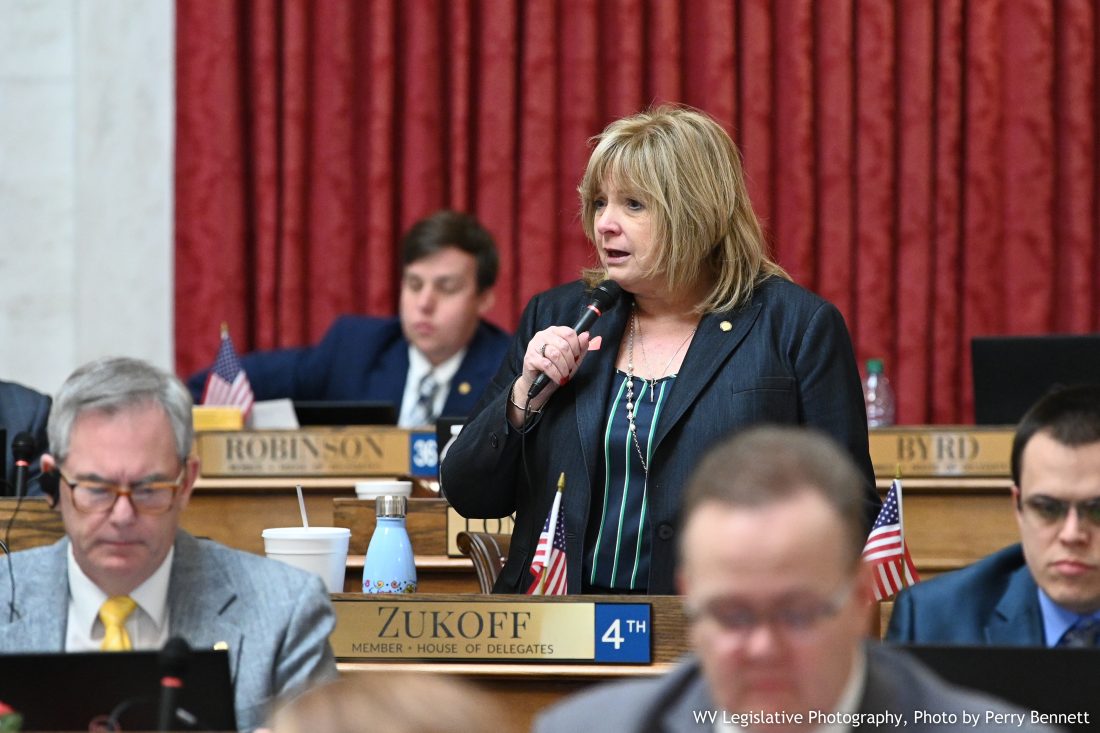 LEGISLATION — Del. Lisa Zukoff, D-Marshall, debates during floor sessions in the House of Delegates this week. The House Finance Committee recommended HB 4092 for passage, sending it for its first full reading today. The bill would create a foster children’s bill of rights, as well as a foster parents and kinship bill of rights. -- Photo courtesy of WV Legislative Photography

CHARLESTON — Delegates concerned about the state’s burgeoning foster care system breathed a sigh of relief Thursday after a bill stuck in its third committee for 22 days was on its way to first reading today.

The House Finance Committee recommended House Bill 4092 for passage Wednesday night. It was the only bill on the agenda, which gave the public barely one and half hour’s notice. The bill was moved out in just five minutes.

The bill had sat in the House Finance Committee since Jan. 22. It was first introduced Jan. 10 and made it through the House Health and Human Resources Committees Jan. 17 and the House Judiciary Committee Jan. 22.

Payment rates are updated in the bill, with child placement agencies being paid a rate of $75 per day per child, with foster parents receiving at least 40 percent of the rate, or a minimum of $30 per day. For kinship parents, a floor of $900 per month per child is set.

The bill had been delayed by Republican leadership over concerns about the additional price tag for the rate increases, particularly over the increase for kinship placements. According to a fiscal note from the Department of Health and Human Resources requested on Jan. 23, the bill would cost $30.3 million, with $16.9 coming directly from the state.

The House Finance Committee was able to find the money to pay for the reimbursement increases from Medicaid surplus and Excess Lottery appropriations.

“This is something so many of us on both sides of the aisle had devoted a significant amount of time to for more than a year,” said Delegate Jeffrey Pack, R-Raleigh. “We’ve met with families, talked to judges, spoken with experts in the field. We’ve heard immensely personal stories. We’ve looked into the eye of our state’s most vulnerable children and their families. We’ve felt their pain and promised to make a positive change for them.”

Delegate Lisa Zukoff, D-Marshall, was one of several Democratic members of the House of Delegates who criticized Republican lawmakers for taking their time on the bill. She said she was glad to see the bill reported to the floor Thursday.

“I’m ecstatic, I’m so excited about this bill,” Zukoff said. “This is monumental legislation for West Virginia and for our children. The fact that everyone worked together in a bipartisan manner to get this accomplished and over the finish line for a vote, I can’t imagine that it won’t pass.”

According to department records, 7,037 children are in foster care placement as of January, an increase of 276 children since last year. The state is being sued by three groups over its treatment of foster children.

Lawmakers are also looking at other pieces of legislation that help students with childhood trauma. House Bill 4649 would require the state Board of Education to implement trauma-informed practices in grades K-12. The House Education Committee recommended HB 4649 for passage as well Thursday morning. A companion bill, House Bill 4851, would screen children for adverse childhood experiences (ACE).

Zukoff said students often have a hard time learning when they’ve faced traumatic incidents, such as physical or emotional abuse, parental drug use, or extreme poverty. Screening children for ACEs and using trauma-informed practices in school can help identify these students and give them the resources they need to succeed, she said.

“I think we’re finally getting to see that it’s a holistic approach, a continuum of care,” Zukoff said. “There aren’t very many states who have done that, so we would be on the leading edge as we would with trauma-informed schools. It’s so nice to see West Virginia taking a proactive approach to our children. Folks understand that we need to all do this together if we don’t want to lose a generation of children to this opioid epidemic and the poverty that our children face.”