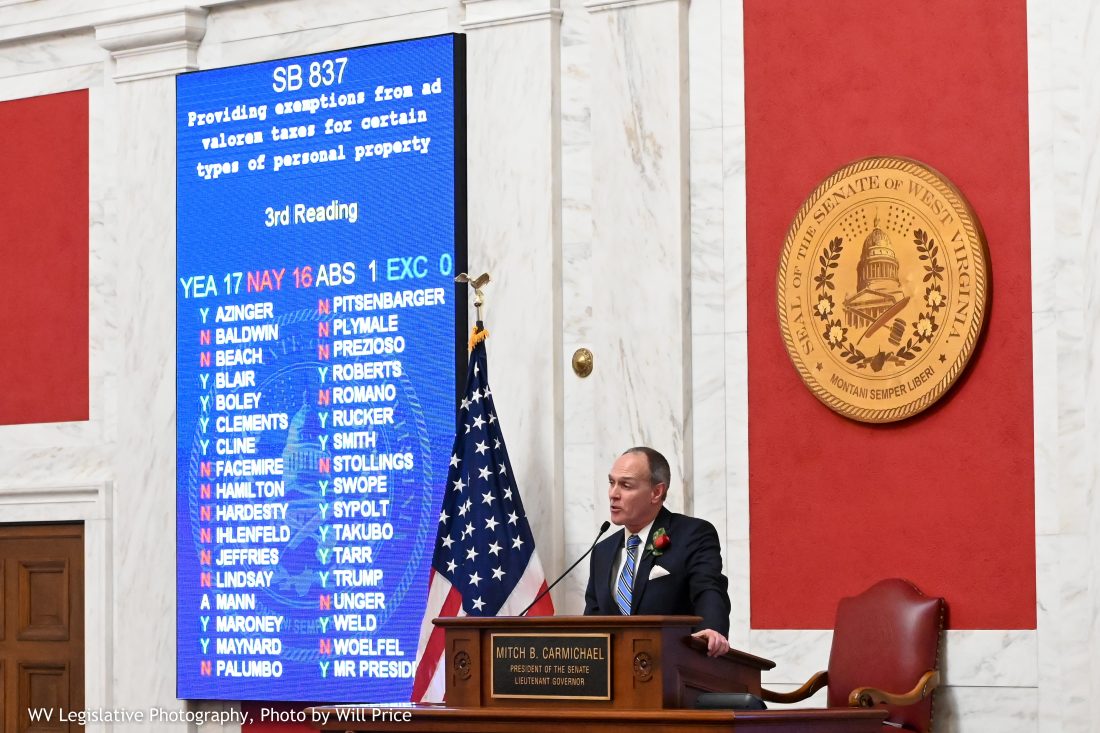 CHARLESTON — After decades of study, months of talk, and weeks of tweaks, the effort to phase out the business and inventory tax took a step forward Monday in a narrow vote, though it still has miles to go.

Senate Bill 837, phasing out the business and inventory tax and motor vehicle property taxes while raising sales and tobacco taxes passed 17-16 with one absent, only needing a simple majority to pass. Action was postponed one day on SB 837’s companion, Senate Joint Resolution 9, which needs two-thirds — or 23 senators — to pass. Senators will vote on SJR 9 later today.

“This is a good deal for the people of West Virginia,” said Senate Finance Committee Chairman Craig Blair, R-Berkeley. “It is absolutely the people’s choice on this.”

SB 837 — if SJR 9 is approved by the Senate today, and later the House of Delegates — will phase out the business and inventory tax on manufacturing machinery and equipment, as well as property taxes on certain vehicles and all-terrain vehicles, trailers, and other categories of commercial vehicles that cross state lines. The phase-out will start July 1, 2021 and continue for six years until the taxes are eliminated.

The Senate Finance Committee estimates that the property tax phase-outs in SB 837 will cost the state as much as $300 million in tax collections, most of which go to county governments and school systems.

The tax increases included in SB 837 will bring in $200 million tax collections by June 30, 2021, according to the Senate Finance Committee. The tax revenue will be placed in a special revenue fund and distributed to counties based on the highest year of property tax collections for each county going back four years. The remaining $100 million loss in property tax collections will be offset with state budget cuts and expected savings generated from business expansions and job creation resulting in increased income and sales tax collections.

SJR 9 would remove language from the state Constitution requiring uniformity in taxation. The joint resolution would give the Legislature the authority to exempt different types of tangible personal property from taxation, reduce the rates of taxation, or reclassify property.

Blair said SB 837 needed to be passed first so that taxpayers would know exactly the kinds of tax reductions the Legislature was planning before they vote for the constitutional amendment that SJR 9 would put on the ballot in November if the Legislature adopts the joint resolution today.

“This is transparency above all else,” Blair said. “There is no way…that any voter should go and change the constitution without knowing what the Legislature intends to do. This bill, Senate Bill 837, does just that. It lays out a roadmap on what the expectation is if you vote yes or you vote no.”

Senate Democrats voted as a block against the bill with two Republican senators from the 11th District — Bill Hamilton, R-Upshur, and John Pitsenbarger, R-Nicholas — joining them. Senate Republicans were also down one member — state Sen. Kenny Mann, R-Monroe.

State Sen. William Ihlenfeld, D-Ohio, said he has heard from all the counties in the 1st District, none of which support either SB 837 or SJR 9. Ihlenfeld questioned the revenue projections from the tax increases while other projections forecast budget deficits over the next decade.

“Everyone was to a tee very frightened about how the revenue would be replaced,” Ihlenfeld said. “They’re worried about what that might look like and their inability to really fully benefit. They like what they have now, the current structure, and they’re afraid of the loss of revenue they have and the potential of greater revenue.”

The business and inventory tax has long been a thorn in the side of the business community. Two studies since 1999 — commissioned by Republican and Democratic governors — have called for the elimination of the tax. According to the Tax Foundation, one-third of all personal property tax collections come from tangible personal property.

Senate Joint Resolution 8 was introduced Jan. 21, which solely dealt with phasing out the business and inventory tax, but SJR 9 — introduced the same day — became the new vehicle for the business and inventory tax repeal, along with SB 837. Senate Democrats got their first look at the proposals nearly two weeks ago. Despite needing at least three Democrats to support the joint resolution, Ihlenfeld said Senate Republicans have done little to woo his caucus.

“It’s more or less been laid out for us and we’ve been told what it is,” Ihlenfeld said. “There’s probably a better way to approach this. There is probably a way to get Democrats to come around on a tax reform package like this. I just think it’s too much and too far. It causes all of our county officials to be apprehensive about it.”

The West Virginia Association of Counties came out against SJR 9 last week after seeing the joint resolution and SB 837 — which was originated in committee — for the first time. The association, in an op-ed, said the proposals would devastate county budgets. Blair said that’s not accurate.

“It is not the intent of myself or this body to put the counties or our school systems or our municipalities at any disadvantage whatsoever,” Blair said. “Doing nothing will get us one thing for certain…the same thing we’ve gotten in the past. This is not an attempt at doing nothing. This is the most transparent attempt at doing something not for the people of West Virginia, but with the people.”

Even with the passage of SB 837, the bill still needs the adoption of SJR 9 today in order to become effective. If SJR 9 is passed today, it will still need two-thirds vote — 67 votes — in the House of Delegates and will require a special election and the vote of the public. If the public votes down SJR 9, SB 837 cannot go into effect.