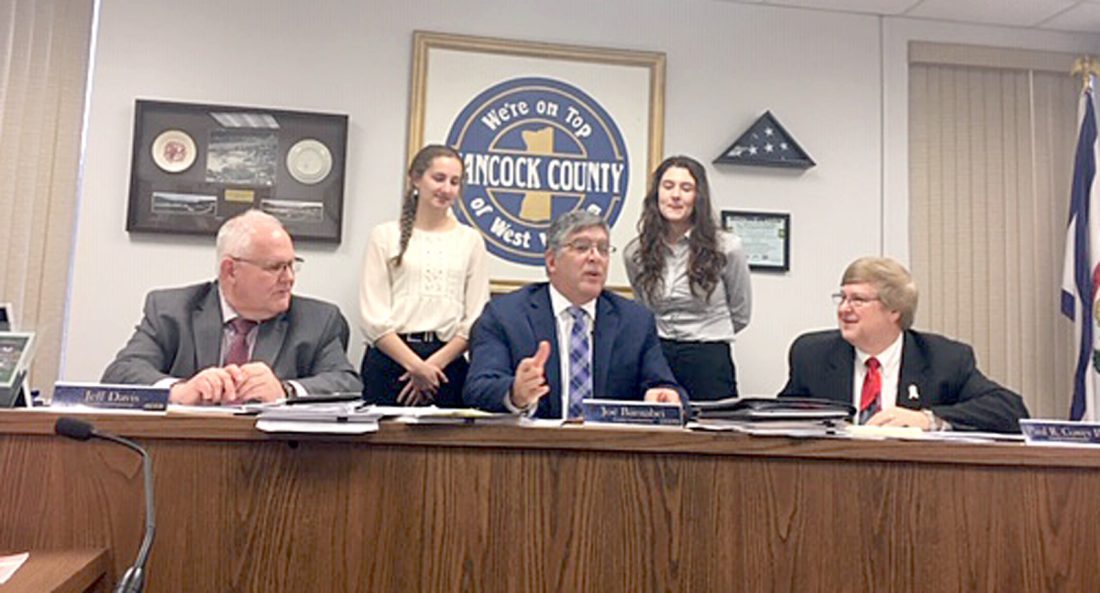 For the last 26 years the West Virginia Secretary of State’s Office has presented the award to high schools which get at least 85 percent of eligible students registered to vote.

This year was the first time for a Hancock County school to receive the award. Weir High School registered 187 students for the award’s gold standard of 100 percent.

Weir High School seniors Olivia Dowler and Sara Hudacheck were nominated by their peers to represent them for the honorary secretary of state recognition. For their nomination, Dowler and Hudacheck received the opportunity to spend a day with Secretary of State Mac Warner. They also represented their peers at the commission meeting, where they received certificates recognizing their accomplishments.

“I’m very proud of them. They’ve worked very hard at getting 100 percent accomplished and they were able to do it all. I think we got everybody in two days registered to vote,” said David Thompson, Weir High School teacher, who attended the meeting as an advisor.

Thompson announced Warner will be presenting the school with a plaque during the third week of March. The exact date for the assembly has not been set.

In other business, the commission:

¯ Jennifer Rohrig, partnership specialist with the Census Bureau, attended to inform residents self reporting for the 2020 Census opens in March, and having an accurate population count helps the state have appropriate representation in Congress and ensures the county gets appropriate federal funding for SNAP, Title IX, and infrastructure among other things.

¯ Appointed Will Allison to the Hancock Public Service District.

¯ Agreed to make a donation of $5,000 to the Montani Semper Liberi Music and Arts at Oak Glen.

¯ Appointed Greta Swann to the HOME Consortium Board.

¯ Approved Fitzsimmons Law Firm PLLC to negotiate a settlement regarding opioid litigation on behalf of the county. Mike Lucas, the commission’s legal counsel, added that Fitzsimmons has spoken to the county on the settlement parameters and will not have to present the county with every offer and detail regarding the litigation.

¯ Approved the resignation of Andrew Locke from full-time dispatcher, and to reimburse Locke for unused personal time.

¯ Approved the resignation of Brian Dillon from courthouse maintenance/janitor, and to reimburse Dillon for unused personal time. Commissioner Jeff Davis wished Dillon the best and thanked him for being a good employee.

¯ Agreed to advertise for a courthouse maintenance/janitor position.

¯ Approved the renewal with the West Virginia Division of Highways for the parking lot at the Magistrate Court.

¯ Motioned to make a letter addressed to Senator Joe Manchin supporting net neutrality a matter of public record. The commissioners are working towards net neutrality but are not ready to implement programs for it currently.

¯ Agreed to advertise for and hire a part-time field deputy for the Assessor’s Office.

¯ Approved the purchase of three new vehicles for $100,000 for the sheriff’s department. The department is looking to purchase two Dodge Chargers at $23,169 each and a Dodge Durango at $29,808, totaling $76,146, the remaining money will go to equipping the vehicles.

¯ Approved county commission travel of: $236 for Commissioner Joe Barnabei; $245 for Commissioner Paul Cowey; and $511 for Davis, after they attended the annual West Virginia Association of County Officials conference.

¯ Chuck Wright, clerk of the circuit court, also attended the county official conference with the commissioners and they all agreed it was a nice conference with a lot of good opportunities and they left with quality information.