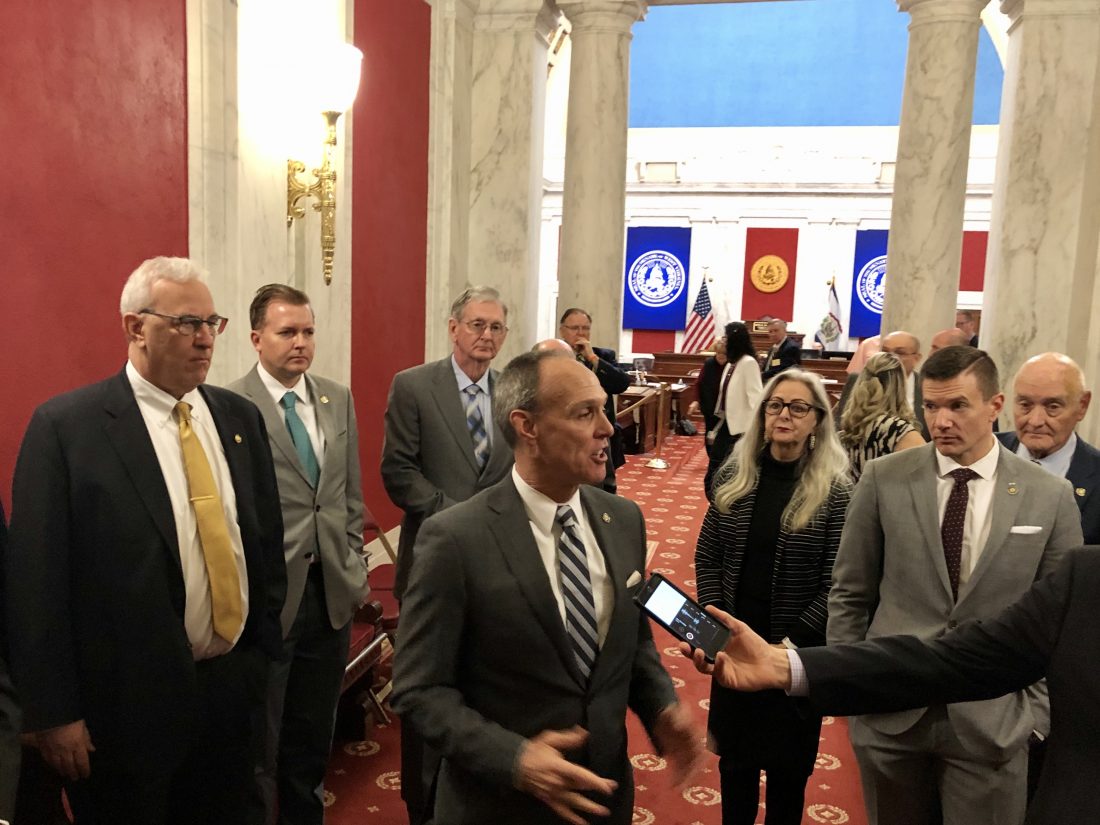 Senate President Mitch Carmichael, surrounded by Republican senators, speaks about Senate Joint Resolution 9 prior to the start of the floor debate on the resolution. -- Steven Allen Adams

Senate Joint Resolution 9, which would have eliminated language from the West Virginia Constitution preventing the Legislature from lowering or eliminating various property taxes, failed 18-16 in the Senate. It needed two-thirds of senators, or 23 votes, to pass.

SJR 9 would have given the Legislature the authority to exempt different tangible personal property from taxation, reduce the rates of taxation or reclassify property.

Senate Republican leadership said SJR 9 would be a gamechanger in how the state taxes manufacturers and businesses, while providing tax relief to West Virginians.

The Senate passed the companion bill to SJR 9 Monday in a 17-15 vote. SB 837 would phase out the business and inventory tax on manufacturing machinery and equipment, as well as property taxes on certain vehicles and all-terrain vehicles, trailers, and other categories of commercial vehicles that cross state lines starting in 2021. The phase-outs would cost the state as much as $300 million in tax collections, most of which go to county governments and school systems.

“The tax on tangible personal property is holding this state back,” said Senate Judiciary Committee Chairman Charles Trump, R-Morgan. “This resolution will lay before the voters the chance to decide whether the Legislature will have the authority to lower or eliminate those taxes.”

SB 837 also included $200 million in tax increases to keep county and school system budgets whole, including raising the sales tax from 6 percent to 6.5 percent, raising the tax for a pack of cigarettes from $1.20 to $2, raising taxes on the wholesale price of tobacco products from 7 percent to 50 percent, and raising e-cigarette liquid taxes from 7.5 percent to 50 percent of the wholesale price. The remaining $100 million would have been made up in reduced state budgets and savings form manufacturing growth and job creation.

“The fact of the matter is (Senate Bill) 837 was not a tax increase,” said Senate Finance Committee Chairman Craig Blair, R-Berkeley. “It’s a tax shift where we’re able to manipulate it better and making it so that you’re not miserable when you’re trying to pay it. It’s a reduction.”

Hamilton and Pitsenbarger voted with Democrats against SB 837 Monday. The bill needed SJR 9 to be adopted to become effective.

During the floor debate on SJR 9, Democrats said the Senate Majority did very little to engage them during the entire process for creating the tax reform proposals. Senate Minority Leader Roman Prezioso, D-Marion, said the Senate needed assurances from the House of Delegates and Gov. Jim Justice before agreeing to the resolution.

“I’d like to have a little more certainty…that would give me some sort of relief,” Prezioso, the former chairman of the Senate Finance Committee, said. “That uncertainty scares me a bit. We can’t tell what (Justice) is going to do. We’re not certain what the House is going to do. There’s just a bunch of questions in our mind that haven’t been answered.”

Democrats also were concerned about the financial numbers for the taxes. The Senate Finance Committee estimates did not factor in how much growth to expect in other tax line items from either new businesses coming to the state or existing businesses expanding. The West Virginia Association of Counties came out against SJR 9 last week

“We shouldn’t ask our people to vote on a deception,” said Sen. Mike Romano, D-Harrison. “This bill is a tax increase on our individuals…we are taking revenues that are much needed.”

“I believe that county autonomy will be severely impaired by the passage of this resolution,” said state Sen. Paul Hardesty, D-Logan. “I’m not willing to go all in. I’m not willing to double down or roll the dice when I know where the finances are in this state.”

Had SJR 9 passed the Senate and received the required two-thirds vote of 67 in the House of Delegates, it would have required a special election and the vote of the public.

“I trust the people in West Virginia to make the right decisions when they’re given the right information,” Blair said. “We’ve done it right. We’ve done it transparent. We’ve done it well. Both of these bills deserve to go to the House of Delegates and have them the opportunity to consider them, and that’s not going to happen here today. That’s a sad day for West Virginia.”