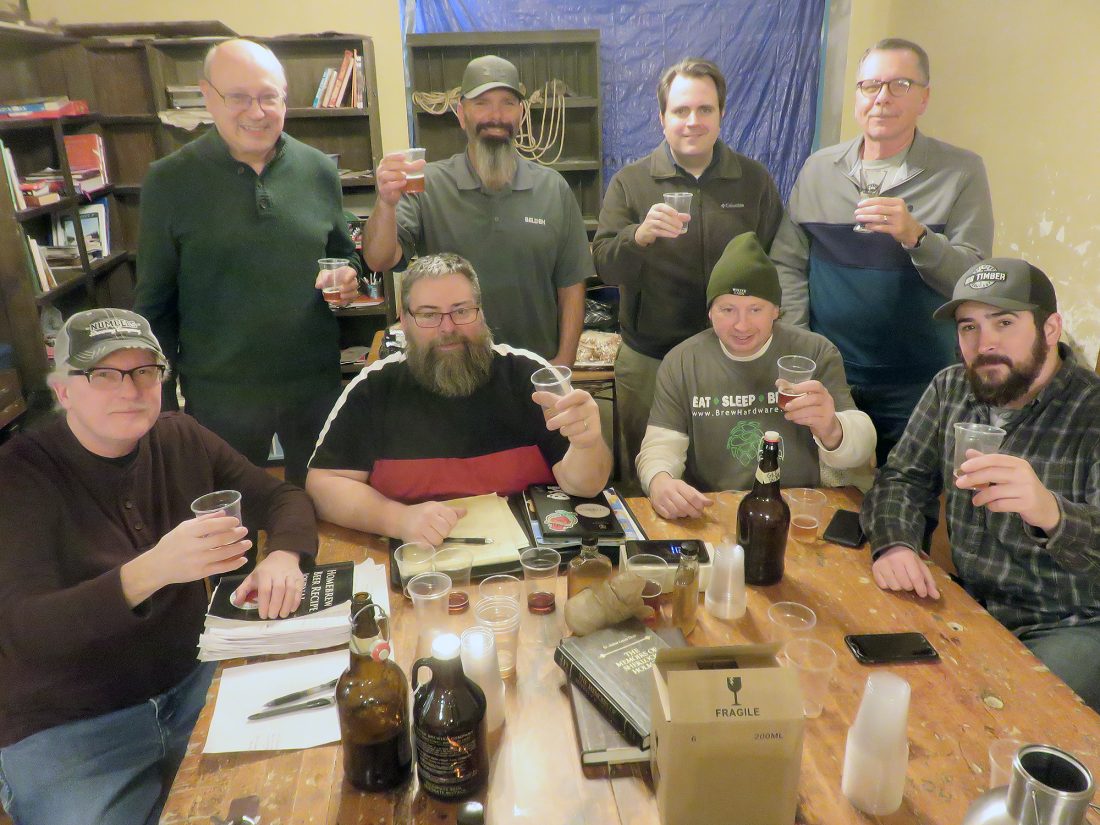 CHEERS FOR THIS GROUP — Members of H.O.O.C.H., an acronym for Homebrewers of Ohio Valley Club House, get together informally each month to discuss techniques, share recipes and stories, have topic discussions and brew together. Their meetings are held at 6:30 p.m. on the third Tuesday of the month at Leonardo’s Coffeehouse, located at 159 N. Fourth St., Steubenville. New members are welcome. The next meeting is Feb. 18. Toasting a sample at the January meeting were, seated, from left, Ben Beswick, meeting leader Jim Chaney, John Diflorio and Dave Cantrell; and standing, Nick Trausch, Jeff Crook, Jason Valentine and Jeff Durbin. For information about the group, call (740) 381-0116 or e-mail hoochhomebrew@gmail.com. -- Janice Kiaski

STEUBENVILLE — Something’s always “brewing” when members of H.O.O.C.H. get together.

An acronym for Homebrewers of Ohio Valley Club House, the organization has been meeting on the third Tuesday of the month, gathering at 6:30 p.m. at Leonardo’s Coffeehouse at 159 N. Fourth St.

What the group lacks in numbers — there are fewer than 10 — they make up for in enthusiasm, happy to spend a few evening hours sharing recipes, discussing techniques and having topic discussions.

“We are serious homebrewers who enjoy what we do as a hobby,” notes the Toronto resident. “What’s enjoyable about brewing is friendship and camaraderie and how unique each brew can be.”

Although the group has no officeholders or dues, Beswick keeps minutes at the meetings, and Jim Chaney leads them.

In fact, it was Chaney who took the initiative to start the group in 2012 after a few homebrewers met at the Winemaker’s Loft and Gift Shoppe in Follansbee at its annual Christmas party.

“We knew there were people out there who homebrewed,” Chaney explained, noting the group is a forum in which “to hang out, evaluate each other’s beers, and it gives us a better understanding of what’s right and what’s wrong.”

Picking a name for the group brought suggestions, including Beswick’s COALS — an acronym for Chamber of Ale Lovers — and Chaney’s partiality toward HOOCH.

Chaney has been brewing close to nine years and is a certified beer judge of about five years through the BJCP, another acronym, this one for Beer Judge Certification Program.

He enjoys making his own beer. “It’s a lot of fun, and I like trying something different — the challenges,” Chaney said.

“We actually have group challenges,” Beswick interjected. “We’ll say everyone make the same beer but different yeasts, so the whole recipe will be the same but the yeast will be different and see how the taste varies. That’s just one little thing, but we have herbs, spice challenges, vegetable challenges, where we make a blind draw and make what we get. The possibilities are endless, absolutely,” he noted.

“We currently have eight regular members,” Beswick said, noting, “Anyone of age interested is welcome, and we are looking for new members.”

“It was such a new hobby that equipment was crude, supplies were limited and quality was eh,” Beswick said. “I didn’t brew for 16 years when my children were growing up.

Ten years ago, Beswick was back at it.

“I brewed with kit beers where all the ingredients were in one box. I used to bottle beer, now I keg the beer. I also brew all-grain with my own recipes. This evolved with experience and being in a club surrounded with a bunch of great brewers,” he explained.

“I brew with very simple procedures, but most of the guys use more complex techniques,” Beswick noted. “The appeal is that the sky is the limit on style of brew, and the flavors can be extraordinary. For me it takes about 6 hours to brew, and when done, I can’t wait to brew again,” he added.

Asked for an explanation of ingredients and a perspective of how the brewing process goes, Beswick responded, “Basic ingredients vary. It can be a can of malt extract with hops already infused, to using all grains and pellet or whole leaf hops. There are many varieties of grains, hops and yeast, all playing a part in the style and complexity of the brew.

“Liquid malt or dry malt extracts have all the starches converted to sugars — all you need to do is boil and add hops, chill and pitch yeast. With all grain, you have to convert the grain starch to sugars (the mashing process), then the sugars need removed from the grain bed (the sparging process), then you boil the liquids and add hops and flavorings at different intervals according to the recipe. This is called the wort,” he continued.

The group has poured at fundraisers in the past, including Barks, Bourbon and Brews, Catholic Central Boosters and Spot Bar.

“We also collaborate with the Wheeling Alers Brew Club and assist them at some fundraisers,” Beswick said. “Last year we started going on local brew tours, and we are trying to go twice a year. We toured breweries in Pittsburgh, Canton, Minerva and Lisbon last year.”

And it fared well competitively.

Its Samiclaus clone “Speed it up Ron” placed Best of Show, for example, among 404 entries in the 29th-annual Pittsburgh area homebrew club competition. It also placed second at the Ohio State Fair.

Helicon Brewery invited the club to assist in brewing the recipe where it was on tap at its location in Oakdale, Pa., along the Panhandle Trail. HOOCH member Jeff Durbin also won first place in the Pittsburgh contest’s specialty category and was invited to guest brew his Mayan Mocha Stout at Abjuration Brewery in McKees Rock, Pa.

For a few members, competitions are a goal, including the TRASH competition in Pittsburgh. That’s an acronym for Three Rivers Alliance of Serious Homebrewers.

Jeff Durbin of Yorkville cites two factors that motivate him to be part of the homebrewers.

“I am a retired high school physics and chemistry teacher in Buckeye Local, and science has always been a big part of my life, so I like the science aspect of brewing from scratch,” Durbin said.

“And of course the other obvious thing is I’ve always liked beer. Homebrewing gives you the control to do things you would like to drink,” Durbin said.

The experimenting has brought good results.

“I think so — it’s an ongoing process. You continue to learn and refine,” he said, offering this bit of advice. “Just give it a try and don’t be upset with failure or what you may perceive as failure because you will get better as you go along,” Durbin said.

Dave Cantrell of Warwood, another member on hand at the January meeting, explained that a friend got him interested in homebrewing.

“I wanted to expand my pallette,” he said, “and I’ve always enjoyed beer. Once I started brewing and hanging out with these guys, picking their brains, I’ve been trying to make better beer.”

Nick Trausch of Mingo Junction cited his greatest joy in homebrewing is “I try to duplicate beers that I like. I don’t like IPAs, but I like the German style beers.”

He said the process is “kind of hit and miss, but every time you do it, you can refine your process.”

Trausch’s son-in-law, Jason Valentine of Pittsburgh, was on hand at the January meeting, a newbie to the process.

Jeff Crook of Weirton also is a newcomer to the club.

“This is only my second time here, and I haven’t done any brewing,” said Crook, who learned about HOOCH when the Weirton VEW held a wine-tasting event.

Why does he want to try?

John Diflorio of Weirton started brewing many years ago, he said, when his wife bought him a kit as a birthday surprise.

“I have been brewing the last five to six years every other weekend,” he said of the effort to make different styles of beer.

And since he’s joined the club, “I’m a hundred times better. You learn what to do, what not to do.

His advice for first-timers?

“Stick with it,” Diflorio said. “You’re going to improve with every batch — and join a homebrew club if you can”