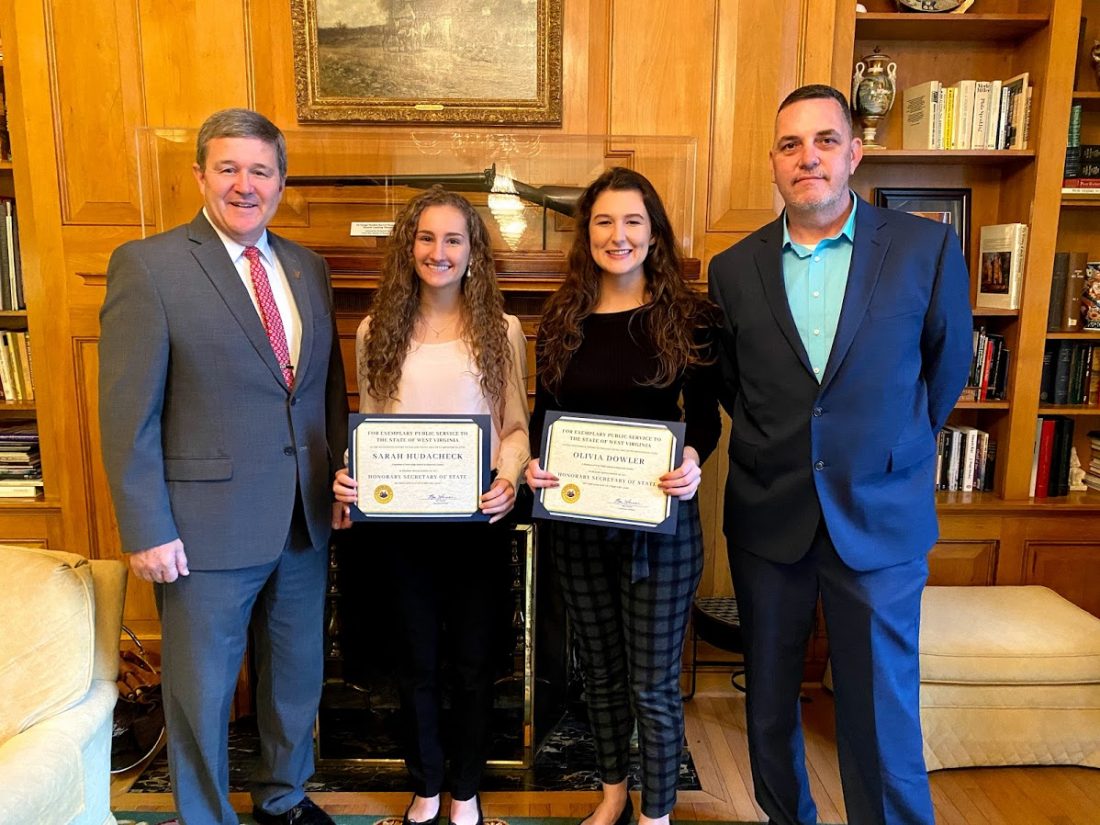 EFFORTS NOTED — West Virginia Secretary of State Mac Warner, left, with students Sarah Hudacheck and Olivia Dowler of Weir High School, and their teacher David Thompson. The students were named honorary secretaries of state in recognition of their efforts to register classmates to vote. -- Contributed

CHARLESTON — West Virginia Secretary of State Mac Warner announced this week that Sarah Hudacheck and Olivia Dowler of Weir High School were selected as honorary secretaries of state for their efforts to register classmates to vote.

The students are among those from across the state to be recognized as part of the Secretary of State’s voter registration program, leading their schools to register at least 85 percent of eligible students to vote.

On Monday, the group attended a day at the State Capitol where they heard from lawmakers and Warner. They were also recognized by the West Virginia House of Delegates and State Senate.

“It’s an honor to meet such a determined group of students who are each making a difference in their schools,” Warner said. “Registering to vote is the first step to getting engaged in the civic process, and these students are inspiring their classmates to get registered and prepare for the upcoming elections.”

According to Warner’s office, voter registration in most West Virginia high schools is a student-led effort. The Honorary Secretary of State program is part of the Jennings Randolph Award, an initiative by the Secretary of State’s office to encourage students to discuss the importance of civic engagement and to register to vote. It is named for the late U.S. Senator Jennings Randolph, a West Virginia native, who sponsored the 26th Amendment to the U.S. Constitution, which reduced the voting age from 21 to 18. Those high schools which register at least 85 percent of their eligible students are honored with the award for their efforts.

Over the last three years, the Secretary of State’s office has worked with county clerks, teachers, and student leaders to register more than 43,000 eligible high school students to vote.

Warner announced the first round of Jennings Randolph Award-winning schools earlier this month. Schools with 85 percent voter registration have until May to register 100 percent of their eligible senior class.

For more information on the Jennings Randolph Award and Honorary Secretary of State program, visit wvsos.gov.