Fauci open to a 14-day ‘national shutdown’ to stem virus 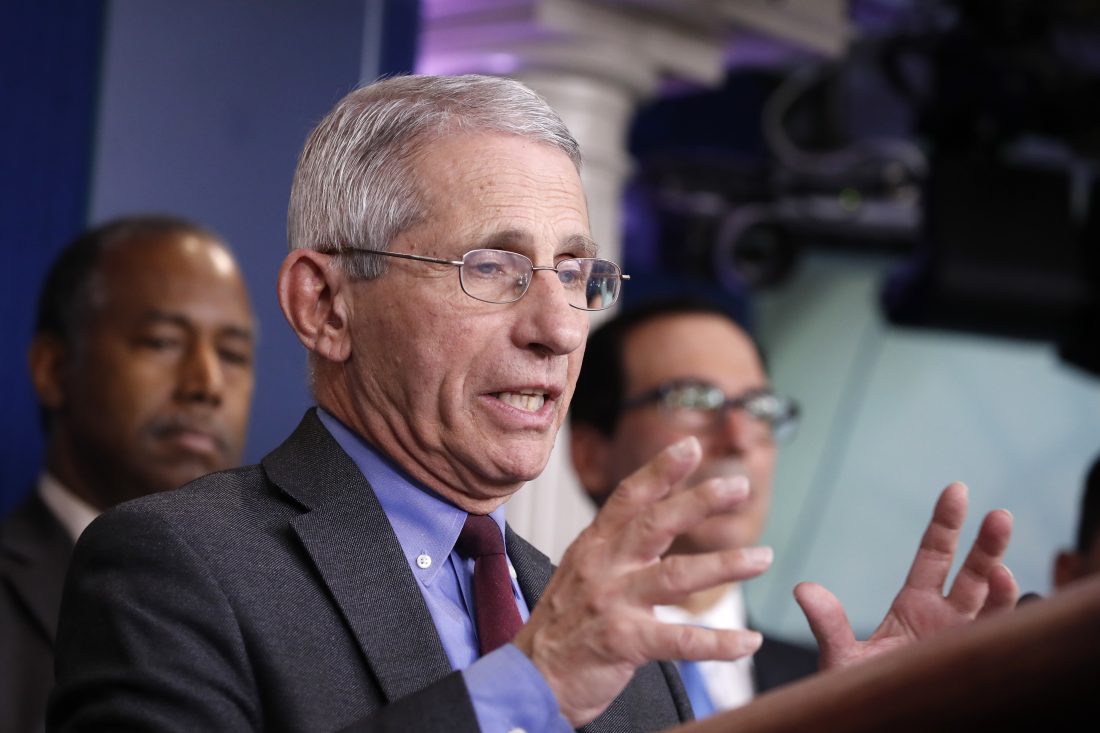 TOP EXPERT — Dr. Anthony Fauci, director of the National Institute of Allergy and Infectious Diseases, speaks during a briefing on coronavirus in the Brady press briefing room at the White House, Saturday, in Washington. -- Associated Press

WASHINGTON — The government’s top infectious disease expert said Sunday he would like to see aggressive measures such as a 14-day national shutdown that would require Americans to hunker down even more to help slow spread of the coronavirus.

Still, Dr. Anthony Fauci said travel restrictions within the United States, such as to and from hard-hit Washington state and California, probably will not be needed anytime soon.

Fauci, the public face of the administration’s messaging during a round of morning TV interviews, said the country should do as much as “we possibly could,” even if officials are criticized for “overreacting.” He said he raised the issue of measures such as a shutdown with the Trump administration, and said it has been open to his ideas.

“I think Americans should be prepared that they are going to have to hunker down significantly more than we as a country are doing,” said Fauci, a member of the White House task force on combating the spread of coronavirus. He head the National Institute of Allergy and Infectious Diseases at the National Institutes of Health

Fauci said the elderly and those with underlying medical conditions should already be hunkering down, but other Americans, too, should consider “much more” restrictions on outside activity, from work and travel to possibly self-restrictions on eating at restaurants.

“Everybody has got to get involved in distancing themselves socially,” Fauci said.

“Everything is on the table,” he said. “Right now, myself personally, I wouldn’t go to a restaurant. I just wouldn’t because I don’t want to be in a crowded place. … I don’t want to be in a situation where I’m going to be all of a sudden self-isolating for 14 days.” The virus has an incubation period of anywhere from two days to 14 days before symptoms emerge.

For most people, the new coronavirus causes only mild or moderate symptoms, such as fever and cough. For some, especially older adults and people with existing health problems, it can cause more severe illness, including pneumonia. The worldwide outbreak has sickened more than 156,000 people and left more than 5,800 dead. The death toll in the United States has reached more than 50, while infections neared 3,000 across 49 states.

The vast majority of people recover. According to the World Health Organization, people with mild illness recover in about two weeks, while those with more severe illness may take three weeks to six weeks to recover.

President Donald Trump last week announced a sweeping travel ban for much of Europe. On Saturday, he added the United Kingdom and Ireland to a list of countries that would face travel restrictions over the next 30 days. He has pledged broadened U.S. testing for the virus as major employers such as Apple Inc. have sent workers home to telework and several states and big cities, including Los Angeles and Boston, shuttered down schools for a week or more.

In the nation’s capital, White House officials over the weekend said Trump tested negative for the virus after he was recently in contact with three people at his Florida resort who tested positive, and several lawmakers in recent days have said they were self-quarantining out of an abundance of caution.

On Sunday, Democratic Rep. Adam Schiff, chairman of the House Intelligence Committee, said a former staff member tested positive for COVID-19. That staffer, Daniel Goldman, the attorney who led Democratic questioning during the House impeachment hearings, had left the office 10 days ago and he’s believed to have contracted the virus after his departure.

“We will still be taking additional precautions over the next few days,” Schiff said. “The former staffer is feeling better and no current staff have reported any flu-like symptoms at this time.”

NIH reported Sunday that one of its staff working in its division on arthritis and musculoskeletal and skin diseases had tested positive for COVID-19, its first case.