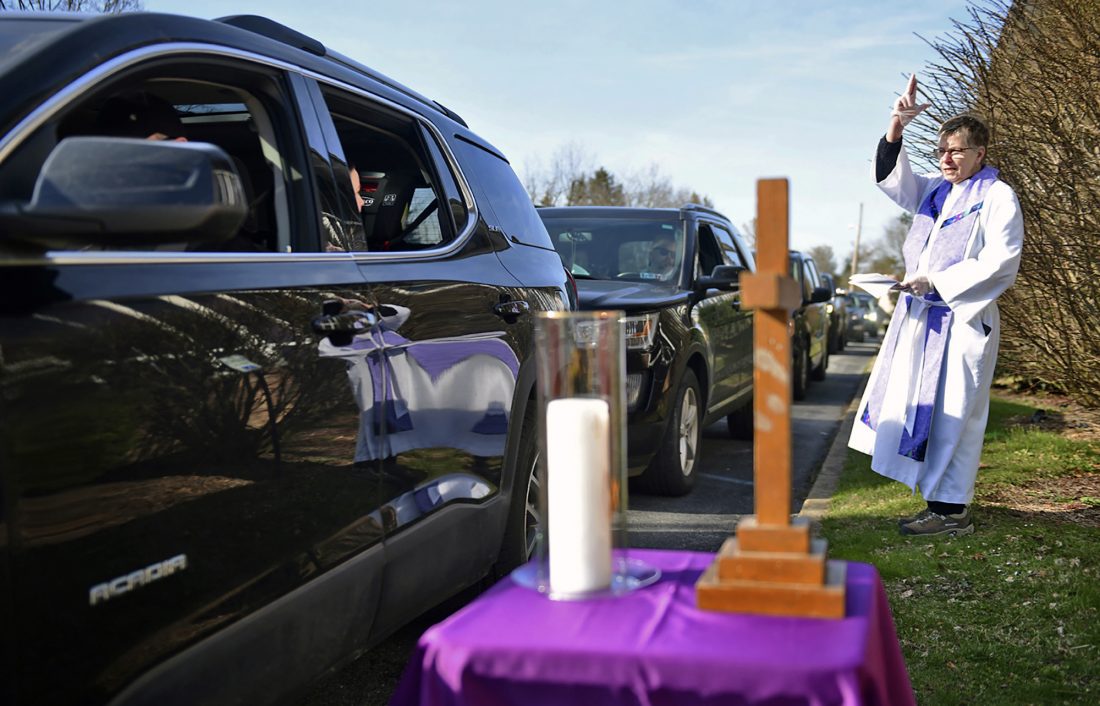 SERVICE -- The Rev. Julia Sprenkle, Christ Evangelical Lutheran Church pastor, offers a blessing to parishioners during a drive-thru worship service held at the church on Elknud Lane in the Westmont section of Johnstown, Pa., on Sunday. -- Associated Press

HARRISBURG, Pa. — The Pennsylvania Supreme Court dismissed a lawsuit filed by a gun shop that challenged Gov. Tom Wolf’s authority to shutter businesses determined to be “non-life-sustaining,” paving the way for enforcement to begin Monday.

Without comment, a majority of the state’s high court late Sunday denied the petition by a gun shop, a gun purchaser and a law firm to have Wolf’s shutdown order thrown out. The lawsuit had claimed Wolf’s edict violated the Second Amendment right to bear arms and other constitutional rights.

The court also said a legal challenge to Wolf’s order to close law offices had become moot because of subsequent action that lets lawyers work from their physical locations to perform duties deemed essential by county or federal judges.

The Democratic governor has ordered all nonessential businesses to close their physical locations indefinitely, saying the measure is needed to help slow the spread of the new coronavirus and prevent hospitals from becoming overwhelmed with COVID-19 patients.

In a dissenting statement joined by two other justices, Justice David Wecht said Wolf’s order amounts to “an absolute and indefinite prohibition upon the acquisition of firearms by the citizens of this commonwealth — a result in clear tension with the Second Amendment” and the state constitution. He called on Wolf to make some allowance for the in-person sale of firearms.

Wolf’s order to close down the physical locations of businesses deemed not essential to sustain life is being enforced as of Monday morning.

The Wolf administration has been sorting through nearly 10,000 waiver requests, saying their only consideration is health and safety.

State police spokesman Ryan Tarkowski said Monday that troopers are aiming at voluntary compliance, “not coming in with a hammer at 8:01” a.m., when the enforcement period began.

“Our goal is not to write a giant pile of citations,” he said.

Pennsylvania officials have reported more than 470 cases of COVID-19 infection and three deaths.

For most people, the virus causes only mild or moderate symptoms, such as fever and cough. For some, especially older adults and people with existing health problems, it can cause more severe illness, including pneumonia. The vast majority of people recover.

The Associated Press receives support for health and science coverage from the Howard Hughes Medical Institute’s Department of Science Education. The AP is solely responsible for all content. Follow AP coverage of the virus outbreak at https://apnews.com/VirusOutbreak and https://apnews.com/UnderstandingtheOutbreak.