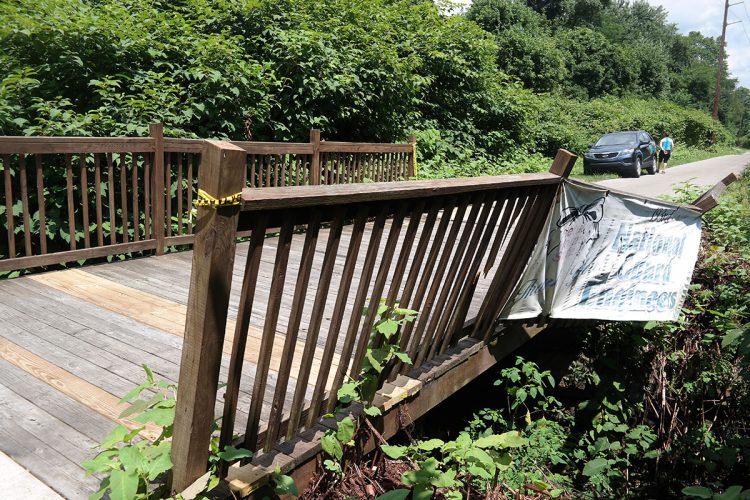 The Harrison Run Bridge on the Brooke Pioneer Trail near Beech Bottom has been vandalized twice since last summer. -- File photo

WELLSBURG — The Harrison Run Bridge located on the bike trail in Brooke County just south of Beech Bottom has been damaged for the second time since last summer.

After vandals damaged a railing on the state Route 2 side of the 20-foot-long bridge last summer, Wayt said vandals have now damaged the river side of the structure, which spans Harrison Run.

“The vandals have come back, and have made it worse,” Wayt explained.

He said members of the trail association continue looking at ways to try and stop the ongoing vandalism to the structure.

“It means so much to so many people,” he added.

Wayt said the situation is disheartening as vandals are once again “breaking up posts” and destroying the opposite side of the bridge.

“We now have a growing reward for arrest and conviction,” Wayt commented.

He said there is a minimum reward of $2,500 for information that would lead to the arrest and conviction of the perpetrators. Wayt said anyone interested in responding should contact the Brooke County Sheriff’s Department at (304) 737-3660.

Initially set at $2,000 last year, the reward has grown thanks to private donations.

Wayt said the bridge, which is an essential part of the trail that connects the Wheeling area to Brooke County, was built about 10 years ago by the West Virginia National Guard Engineering Squadron based in Moundsville after the Pioneer Trail Association purchased the supplies.

He said the section of the trail where the bridge is located is still open, but a few miles north of that area the trail is closed due to the ongoing construction of the new Ohio River bridge. He said the Brooke Pioneer organization has continued to treat, paint and take care of the structure over the years.