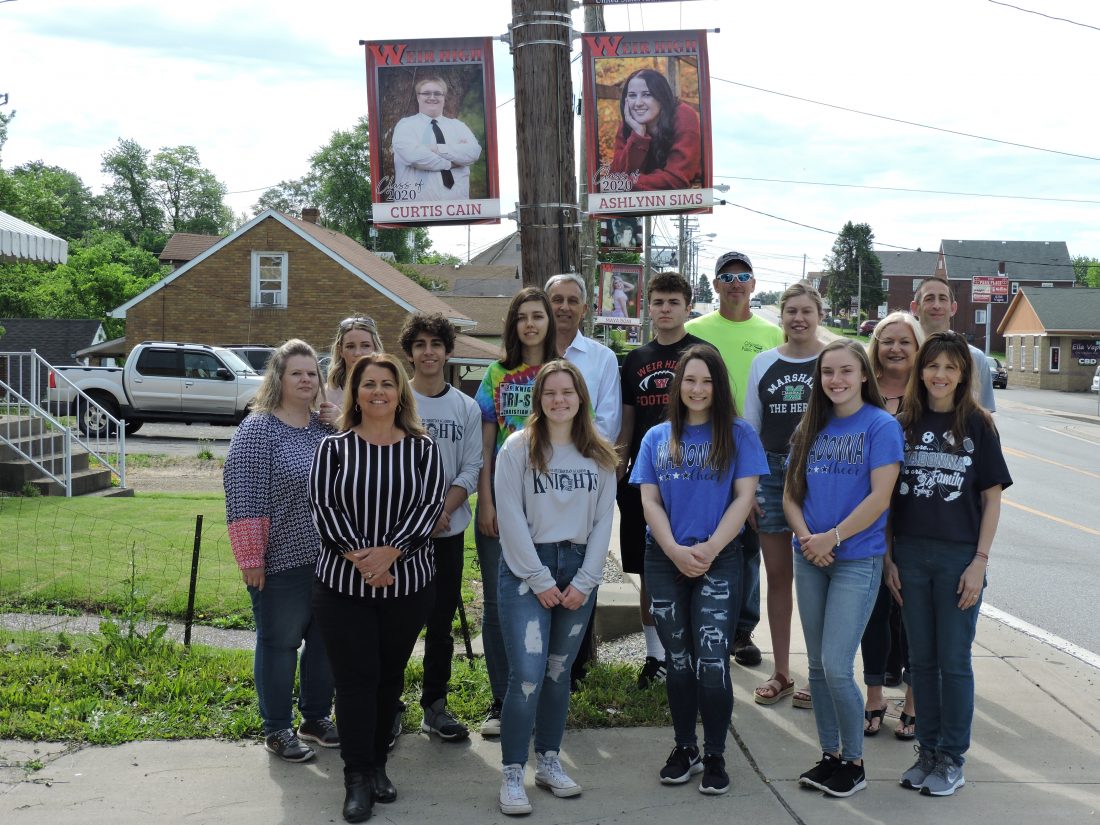 SIGN, SIGN, EVERYWHERE A SIGN — Parents and students from Weir High School, Weirton Madonna High School and Tri-State Christian Academy, along with representatives of the City of Weirton and Newbrough Photo gathered Wednesday morning to unveil the new banners hanging in the city to honor members of the Class of 2020. (Photo by Craig Howell)

WEIRTON — While the traditional ceremonies and celebrations are being held off for the time being, Weirton residents still are finding ways to celebrate members of the Class of 2020.

Motorists traveling along Pennsylvania Avenue in the city will notice banners showcasing the pictures and names of many area high school seniors — 146 from Weir High, 33 from Weirton Madonna and six from Tri-State Christian Academy.

The effort was started by Michelle D’Amico, a parent of a graduating Weir High student, who said she had heard of other communities organizing such a project and thought it would be a good way to honor the local teens.

D’Amico explained she approached the City of Weirton for support, and posted on a Facebook group for Weir High School parents.

“Within the day, I had people willing to donate,” D’Amico said, noting offers of funding came from parents as well as others in the community. “This project just exploded.”

Contact then was made with parents from Madonna and Tri-State Christian, with those schools coming on board.

Additional support came from John A. Newbrough, of Newbrough Photo, who coordinated with other local photographers, including Tamara’s Camera, Kathleen and Paul’s, Shannon’s Snapshots and Crissy Fierro Photography to gather senior pictures and have the banners produced.

The parents offered thanks to Mayor Harold Miller and City Manager Joe DiBartolomeo for supporting the project, with special thanks to city employee Scott Marshall for installing the banners.

Kelsey Crawford, of Madonna, said she appreciates the efforts by the parents and community in finding ways to recognize the local graduates.

“It really means so much to me, my class and the other classes,” she said.

“I think the banners are a great way to show off the senior class,” he said.

Mackenzie Williamson, of Tri-State Christian, said although the school is located just across the state line in Pennsylvania, they feel very much a part of the Weirton community, and she is grateful to see them represented.

“It’s great to see the community come together,” Williamson said.