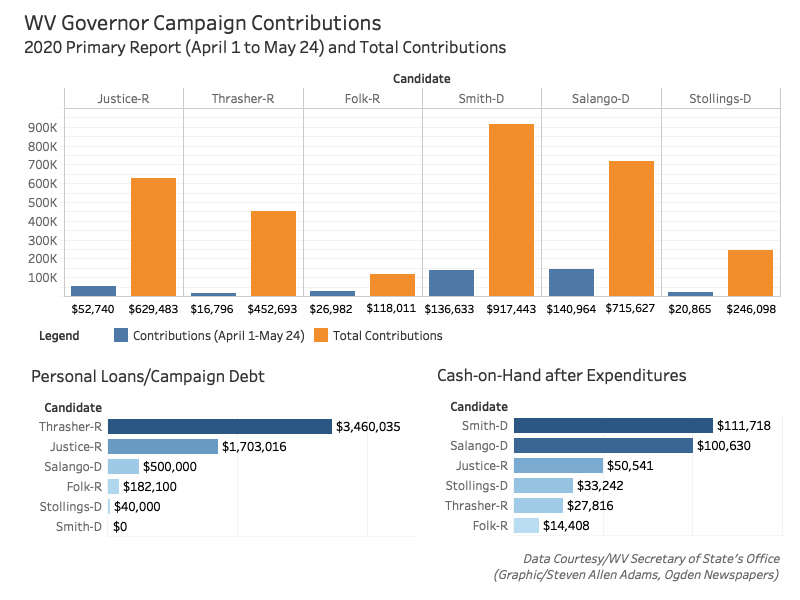 CHARLESTON — Candidates for statewide races have eight days to influence voters, and recent campaign finance reports some have more money than others to help accomplish this task.

The 2020 Primary report, covering the period between April 1 and May 24, was due at the end of last week. The West Virginia Secretary of State’s Office is responsible for electronic campaign finance reports for statewide, legislative, and judicial races for state Supreme Court of Appeals, circuit court judges, and family court judges

The report, which would have been turned in by campaigns to the West Virginia Secretary of State’s Office after the original May 12 primary election date, provides a snapshot into the financial condition of campaigns going into the Tuesday primary.

In the Republican primary for governor, Justice led in campaign donations over the 54-day period. The Democrat-turned-Republican governor received $52,740 in campaign contributions during the 2020 Primary reporting period, bringing him to $629,483 donations election year-to-date.

Justice, the state’s billionaire businessman, loaned his campaign $1.5 million. Justice also has $188,816 in unpaid bills to various venders — including Justice-owned properties, such as the Greenbrier Resort — bringing his total campaign debt to $1.7 million. Justice has spent $2.1 million on his campaign year-to-date, leaving him with $50,541 in cash-on-hand. The Justice campaign declined to comment for this story.

Former Berkeley County delegate and airline pilot Mike Folk had the second best campaign haul, bringing in $26,982 during the reporting period. Year-to-date contribution were $118,011, with Folk loaning his campaign $182,100. Total campaign expenditures came to $240,560, leaving Folk with $14,408 in cash-on-hand. A comment from Folk was not available.

Woody Thrasher, the engineer and former Commerce Department secretary to Justice before being asked to resign, only brought in $16,796 for the reporting period, adding to his year-to-date donations of $452,693. Most of Thrasher’s campaign funding has come from loans, with a grand total of $3.5 million of his own money in the race. Thrasher also had the largest receipt of expenditures totaling $3.9 million. Thrasher has $27,816 in cash-on-hand during the final week of the race.

“We have been laser-focused on victory from day one, and we are making sure West Virginians now cast their ballots for the conservative businessman who shares their values and knows how to create the opportunities that will allow our kids to succeed here at home,” Thrasher said in a statement.

In the Democratic primary for governor, Kanawha County Commissioner Ben Salango edged out community organizer Stephen Smith in campaign donations for the reporting period. Salango, an attorney and businessman, brought in $140,964 in donations during the 54-day period compared to Smith’s $136,633.

“We have the momentum and the outpouring of support from West Virginians has allowed our campaign to get Ben’s message out,” said Grant Herring, Salango’s campaign manager. “We are peaking at the most critical time when voters are making their decision about which candidate is best equipped to get things done for West Virginia families.”

“At the final fundraising report before the election, we beat our millionaire and billionaire opponents at their own game,” said Katey Lauer, campaign manager for Smith. “When we pledged not to take corporate PAC money, the wealthy Good Old Boys Club told us we could never compete in fundraising. Thousands of West Virginians proved them wrong. We’re ahead.”

Trailing Smith and Salango in fundraising was Boone County doctor and state Sen. Ron Stollings, who raised $20,865 during the period and $246,098 in year-to-date contributions. Stollings loaned his campaign $40,000, spent $251,993, and has $33,242 in cash-on-hand. A request for comment from the Stollings campaign was not returned.

State Commissioner of Agriculture Kent Leonhardt is running for a second term as the state’s top farmer, but he has a primary challenger in Cabell County farmer Roy Ramey. Leonhardt has significantly outraised Ramey, bringing in $12,975 for the period and $151,092 in total contributions. Leonhardt has spent $66,534 and has $83,162 in cash-on-hand. Ramey has only raised a total of $3,580 year-to-date with $1,040 in donations for the period. Ramey loaned his campaign $500, spent $2,254, and has $976 in cash-on-hand.

There are three Democrats in the primary for agriculture commissioner, including Monongalia County state Sen. Bob Beach and former deputy commissioner of agriculture Dave Miller. Beach raised $4,100 during the reporting period for a year-to-date total of $28,096. Beach has spent $21,404 and has $4,273 in cash-on-hand. Miller raised $135 during the period and has $3,960 in year-to-date donations. After spending $3,906, Miller had $55 in cash-on-hand.

The June 9 primary will decide the winners of three seats on the non-partisan state Supreme Court.

Armstead is being challenged by Marshall County Circuit Court Judge David Hummel and former state Supreme Court justice Richard Neely. Hummel raised $27,100 during the period, giving him $144,414 in year-to-date donations. The Hummel campaign spent $90,217, leaving him with $21,244 in cash-on-hand.

In the Division 3 special election to fill the remaining four years of former justice Allen Loughry’s term, the man who was appointed to replace him — former Raleigh County Circuit Court judge John Hutchison — leads in fundraising even after losing several union endorsements after he sided with the majority of the Supreme Court in upholding the state’s Right to Work law. Justice Hutchison raised $33,146 for the reporting period for a total of $280,997 in year-to-date donations. After loaning his campaign $15,000, Hutchison spent $249,126 and has $44,979 in cash-on-hand.