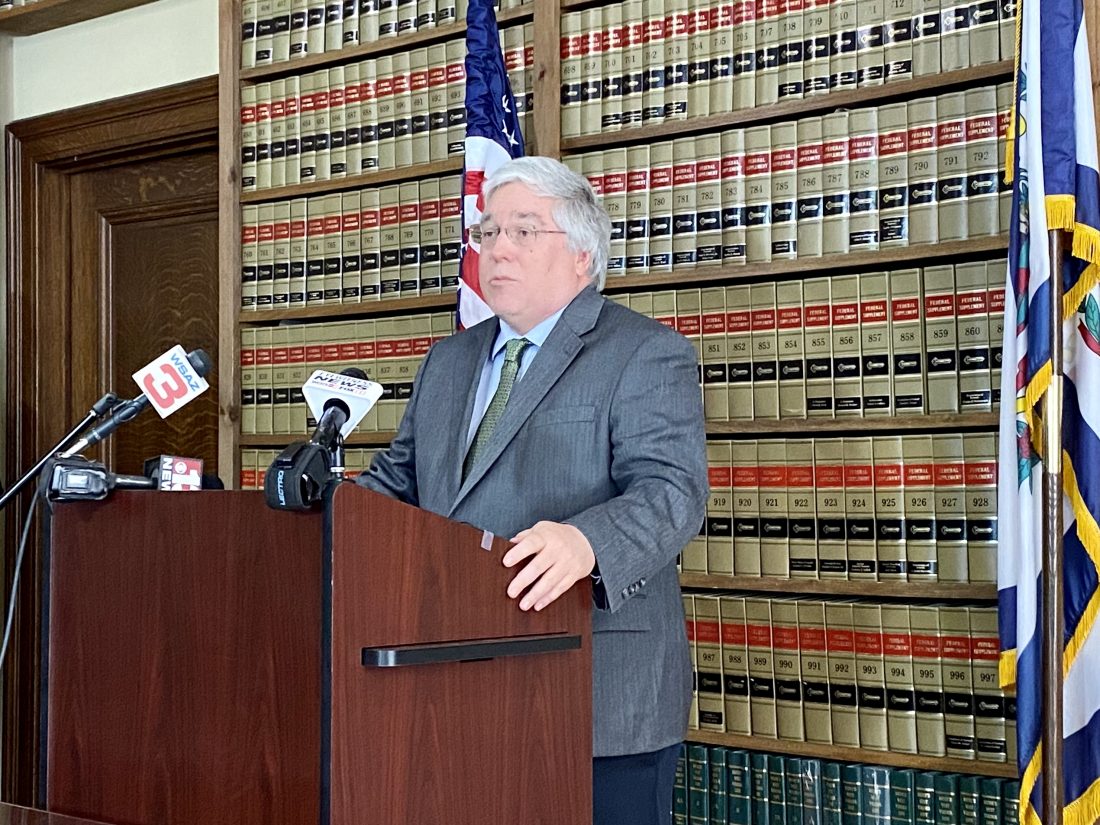 CHARLESTON — After six years, an investigation by West Virginia Attorney General Patrick Morrisey into the federal Drug Enforcement Agency’s role in allowing the opioid crisis to explode in West Virginia has concluded. Morrisey’s Democratic challengers wonder what took so long.

Morrisey announced the results of his DEA investigation, as well as two new lawsuits against major pharmacies, during a Thursday press conference at his offices in the State Capitol Building.

“We’ve tried to look at all the root causes of this issue. We’ve done extensive investigation to try to have permanent solutions that will help our people. We have to fix this problem because real people are dying, families are being shattered, our foster system is an absolute wreck, and so much of it can be laid at the feet of the opioid epidemic. We have to do more.”

The report, stemming from a 2015 Freedom of Information Act request to the DEA, paints the picture of the DEA that on one hand requested additional funding from Congress for combating the diversion of prescription painkillers, while on the other hand refused to limit the number of prescription drugs that companies manufactured.

In a 52-page report, the Attorney General’s Office looked at the DEA’s National Drug Quota System from 2010 to 2016. The results came from the 2016 FOIA, a 2017 FOIA and later a lawsuit against the DEA. More recently, Morrisey said that Attorney General Bill Barr has been far more cooperative.

What state investigators found was a system that allowed an over-supply of potent, addictive prescription painkillers. This created market incentives for massive amounts of opioids to be prescribed by doctors in so-called pill mills, flooded small-town pharmacies with millions of pills and created a black market. When the crackdown on prescription drugs finally happened, users shifted to heroin, fueling a wave of overdoses and deaths.

The DEA enforces the Controlled Substances Act of 1970, including drugs labeled Title II and III. Drugs classified as Title II and III drugs include oxycodone, hydrocodone, morphine, Fentanyl and methadone. Prescription opioid manufacturers, distributors, exporters, pharmacists and medical professionals must be registered with the DEA.

The agency also sets annual production quotes for Title II and III drugs, basing the number of prescription painkillers on medical and scientific need. Morrisey’s report states that the DEA routinely increased quota numbers and accepted sale projections from pharmaceutical manufacturers without confirming whether the demand was really there. It also didn’t investigate how much of the prescription painkillers were being diverted into the hands of addicts and the black market.

“The DEA is supposed to protect our citizens from the production of dangerous drugs…the agency is supposed to limit production of these drugs for what is necessary for the country’s legitimate medical and scientific needs,” Morrisey said Thursday. “Unfortunately, as the opioid crisis raged and as pills were being diverted from legitimate medical uses to abuse on an unprecedented scale, the DEA was absolutely asleep at the switch and they allowed more and more and more pain pills to be produced.”

Morrisey’s report tracks with a report released by the inspector general for the U.S. Department of Justice back in October 2019 accusing the DEA of not responding quickly enough to limit the growth of opioid abuse.

According to the DOJ review, the opioid overdose rate grew by 8 percent per year between 1999 and 2013 and jumped to 71 percent per year between 2013 and 2017. However, the aggregate production quota for oxycodone, a number set each year by the DEA, increased by 400 percent over 11 years starting in 2002. The DEA didn’t start reducing the oxycodone quota until 2017 by 25 percent and by 6 percent in 2018.

In West Virginia, it was 2017 when the state saw a peak of 869 fatal opioid overdose deaths according to the state Office of Drug Control Policy.

The Inspector General’s review found that the DEA didn’t vet all prescription drug registrants before granting registration, its own regulations are not well suited for assessing suitability for new registrants, does not require all prescriptions be submitted electronically, DEA divisions’ plans to combat drug diversion did not include enforcement plans, and rarely used immediate suspension orders. A comment from the DEA was unavailable at press time.

“When one sees the massive increases in the number of pills that were allowed to be legally produced, you wonder how state, local, and federal officials even had a fighting chance to stem the growing tide of opioid prescriptions and substance abuse deaths,” Morrisey said.

Morrisey also announced Thursday that his office filed suit in Putnam County against the national pharmacy chains Walgreens and Rite-Aid, accusing the two chains of failing to monitor and report suspicious orders for prescription opioids. Walgreens purchased Rite-Aid in 2015. The combined company released a statement Friday.

“Walgreens is a company of pharmacists who live and work in the communities we serve,” said Phil Caruso, a spokesman for Walgreens. “Prior to 2014, unlike other companies involved in this litigation, we delivered opioids only to our own pharmacies, and the only place we ever sold opioids was at the pharmacy counter, when presented with a prescription written by a prescriber, with a valid DEA license, for a legitimate medical need.”

Both of Morrisey’s opponents in the Democratic primary on Tuesday said Morrisey should have been working since day one to take on the DEA. Both Beckley attorney Sam Brown Petsonk and Pendleton County Del. Isaac Sponaugle have criticized Morrisey for not seeking more

“All forms of government failed to protect West Virginians from the opioid crisis,” Sponaugle said. “The DEA completely failed to regulate Big Pharma based on the data released in the reports. Patrick Morrisey miserably failed to collect enough money for the damages caused by Big Pharma to our state. Federal and state governments have been useless at their jobs to protect society. The results of their inactions to our communities on the opioid crisis speak for itself.”