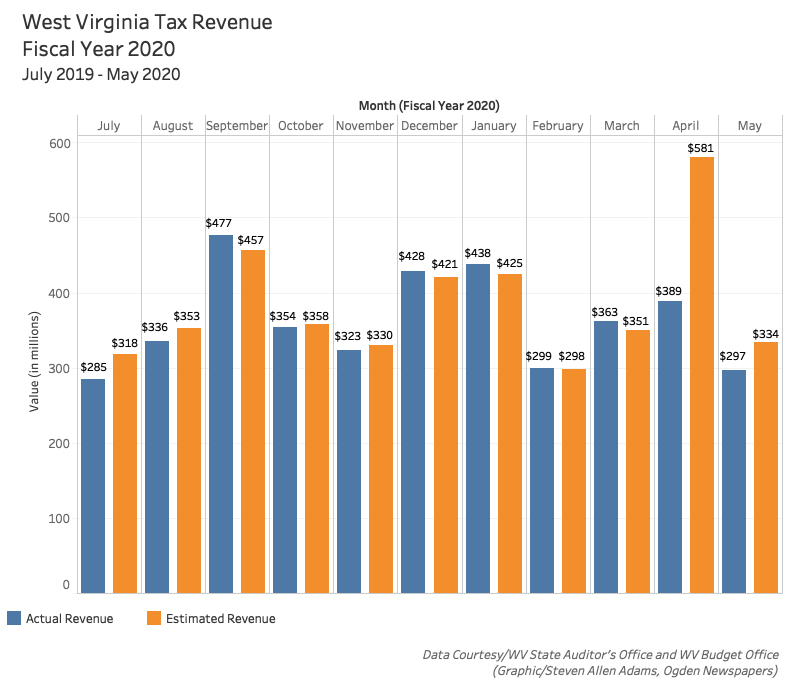 CHARLESTON — For the second consecutive month, West Virginia tax collections came in below estimates, prompting calls for a special session to move money to keep the state from ending the fiscal year with a deficit.

According to the State Auditor’s Office, tax collections for the state General Revenue Fund came in at $296.8 million in May, which was $37.7 million less than projections. April’s tax revenues represent a 22.1 percent decrease from April 2019 tax collections of $380.9 million.

The drop represents an 11.26 percent decrease from projections, which was better than the 33.10 percent drop in tax revenue for last month when all but essential businesses were shut down due to Gov. Jim Justice’s March 23 stay-at-home executive order to limit the spread of the coronavirus.

Department of Revenue officials projected revenues of $580.8 million for April — normally when state income taxes are due — but only brought in $388.5 million.

“While the total numbers still don’t look very good, the total numbers are much, much better than what we thought they were going to be,” Justice said Monday during his daily coronavirus briefing at the Capitol. “We anticipated by the end of the year we would be $500 million upside down.”

While the May tax revenue numbers were below projections, the numbers were better than state officials expected them to be. Justice announced his reopening plan for businesses on April 29, called “West Virginia Strong — The Comeback.” Week six of the reopening plan started Monday with guidance for casinos and movie theaters to open. Most other businesses can reopen with limitations.

The state Constitution requires the state to end the fiscal year with a balanced budget. The 2020 fiscal year ends at midnight June 30. By the end of the month, Justice can order state agencies to either cut budgets or furlough employees.

Justice can also call the West Virginia Legislature into special session to either make supplemental appropriations or to take money from the Revenue Shortfall Reserve Funds, also known as the Rainy Day Fund. The total balance of both funds is $815.5 million as of the end of April.

During his May 1 coronavirus briefing, Justice said he would call the Legislature into special session in June if the state had not either received new guidance from the U.S. Treasury Department to use part of the $1.25 billion C.A.R.E.S. Act coronavirus relief fund for budget backfill, or if Congress hadn’t appropriated additional money for states to cover loss of tax revenue from the economic impact of the virus.

“If we get to the point and time where we really are looking at a possibility of June and we don’t have relief that is in place to be able to handle this backfilling, you’re … right we’ll have (the Legislature) here in June,” Justice said on May 1. “But I really think you’ll have knowledge of what’s going on within a matter of days.”

Speaking Monday, Justice said additional guidance still hasn’t been provided to states for using the C.A.R.E.S. Act funding for filling budget holes, though he still expects the guidance to change to allow that. Justice said based on cash he expects to have on hand at the end of the fiscal year he doesn’t foresee needing to call lawmakers back to Charleston.

“We have done better in the revenue collections in really the tail end of April and throughout all of May than we thought we were going to do,” Justice said. “Our cash continued to come in better than we thought it was going to be.”

Senate President Mitch Carmichael, R-Jackson, was also optimistic about not needing a special session to move money around, though he said lawmakers stand ready to meet if called.

“There are some flexibility options that the governor has at his disposal that he can move some money around to make sure all the bills are paid in this fiscal year,” Carmichael said. “If that occurs and he is able to do those things, then it would not necessitate a special session. However, it could still occur based on some expenditure items that could come up or some additional items as we enter these final few days. We’ll see how it goes, but we stand ready, willing, and able to move some money around to make sure West Virginia pays its bills and services are provided to citizens.”

One place where the state might borrow money to get it through the end of the fiscal year is the surplus funding in the Medicaid line item. Justice had proposed putting $150 million of excess Medicaid funds into its own rainy day fund, though the legislation to do that didn’t make it out of the House of Delegates.

House Finance Committee Chairman Eric Householder, R-Berkeley, had called for Justice to implement a mid-year budget cut between $30 million and $50 million even before March when the coronavirus pandemic hit. Householder said he was against putting $150 million of Medicaid funding in a lockbox in case it would be needed.

“I just wish the governor had taken the opinion … to do a mid-year cut and I don’t think we’d be in this situation right now,” Householder said. “I have heard they will take the same money they advocated to put in a lockbox…and now all of a sudden the governor’s office is enjoying that this money is not in a lockbox and they’re able to have carte blanche to make up the difference.”