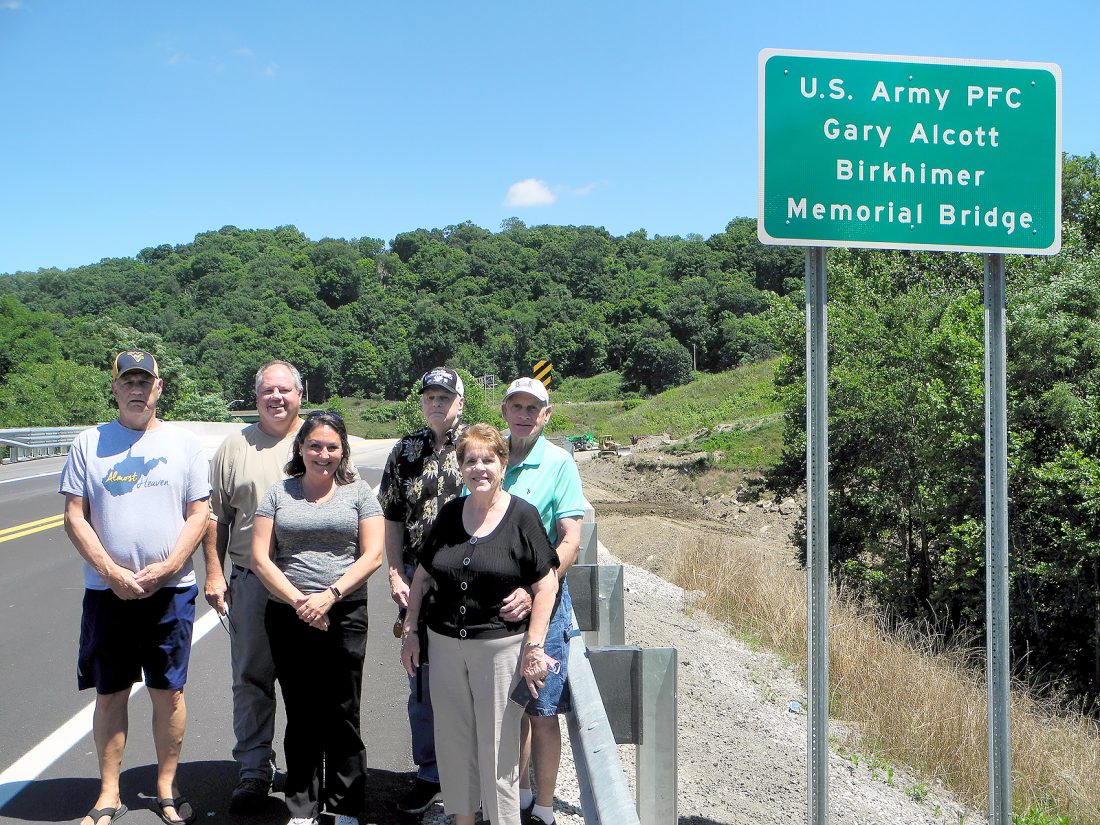 HONOR GIVEN — Family members of Army Private 1st Class Gary Alcott Birkhimer gathered Wednesday near the Harmon Creek Exit bridge near Colliers that has been named in honor of the Korean War veteran, who was killed in action at the age of 21. They included, from left, front: Nikki Birkhimer, wife of Gary’s nephew; Barbara Huff, Gary’s half-sister; and back: Virgil Birkhimer, who approached state Sen. Ryan Weld, R-Wellsburg, about naming the bridge for his cousin; Mike Birkhimer, Gary’s nephew; George Merkich, Gary’s half-brother; and Fred Huff, Barbara’s husband. -- Warren Scott

WEIRTON — After gathering with family members for photos at a recently completed bridge named for their half-brother, Barbara Huff and George Merkich reflected on the joy he brought to people before his life was cut short in the Korean War.

“I don’t have a memory of him not smiling or laughing,” Barbara said of Gary Alcott Birkhimer, who was killed at the age of 21 on April 11, 1951, while serving in the Army’s 17th Infantry Regiment.

The recently refurbished bridge from the Harmon Creek exit of U.S. Route 22 to Colliers has been renamed in Gary’s honor through the efforts of his cousin, Virgil Birkhimer, who noted the nearby Colliers Way Bridge had been renamed in honor of Mark Cool, who was killed in the Vietnam War at the age of 19.

Virgil approached state Sen. Ryan Weld, R-Wheeling, who introduced a resolution renaming the span that was supported by both the state Senate and House of Delegates.

“I was more than happy to make that happen,” said Weld, a former service member who added, “We’re still, unfortunately, losing young servicemen and women much too soon and too often families are receiving news that their loved ones have died while serving their country.”

George was 14 and Barbara was 9 when the family received the news.

George said he was told his older brother was launching shells from a mortar when it became overheated and exploded.

Barbara said in letters home, Gary said that during Korea’s monsoons, the ground became so saturated the heavy mortars often sunk into the ground and had to be dug out.

She said the family was told initially that Gary was missing in action, then several weeks later that he had been killed in action.

“He only had two months (of his tour) to go,” George noted.

Barbara said it was difficult for their mother, Sarah Merkich, to accept Gary’s death, even after his body was returned to the U.S.

She explained Gary and four other siblings were born to their mother and her first husband.

Barbara said her father, Sarah’s second husband, offered to view Gary’s remains to confirm his death, but her mother told him, “No, I don’t want you to remember him that way.”

George said he was told a ring worn by Gary had helped to confirm his identity.

Barbara and George prefer to think of the good times they spent, as young siblings to Gary, whom they described as a happy-go-lucky teen and young adult.

“He was a hard worker but he liked to have a good time, too,” said Barbara, who noted when not helping on the family’s farm in the Kings Creek area as well as their grandmother’s farm nearby, Gary enjoyed fixing up an old car, playing baseball and jitterbugging at a time when the dance was quite popular.

Once, when Gary was charged with looking after a young Barbara, he tied her ankle to a tree so he could take part in a pickup baseball game at Haller Park.

Barbara recalled the berating Gary received from her mother when she learned of it.

But she also remembers good times spent with her older brother.

In addition to teaching her jitterbug steps, he showed her how to make fudge using a mashed potato as a filler.

Another time they were riding to Colliers in his car when it broke down.

Gary put the young Barbara behind the wheel as he pushed the vehicle forward but ultimately, they gave up and called for her father to pick them up, she said.

George said being the youngest of the boys, he often was teased by his older brothers.

But he nevertheless enjoyed walks to the store with Gary and recalled one in which Gary encountered a black snake, lifted it from the ground and tossed it away.

Barbara said he was quite popular with girls, but often when they came to their home, he would sneak out the back door.

She said Gary had been working at the Phillips can factory when he enlisted.

She noted it wasn’t uncommon for young men to pursue a brief stint in the service, and she doesn’t believe he was interested in a military career.

Because they all were so young, it’s difficult for them to say what his future plans may have been.

Both said they were told he once spoke of one day settling down on part of the family farm where each later built their own homes.

Barbara said during the war, Gary’s letters home were penned on very thin paper designed for air mail and though some parts were blacked out by military censors, his disdain for the war shown through.

“He would say, I don’t know why we’re fighting here,” she said, adding Gary couldn’t understand the battles over the poverty-stricken areas where he served.

“My mother always said, politicians make the wars and young men have to fight them,” Barbara said.

She said public support for the Korean War wasn’t strong and many of its veterans were forgotten for some time.

Barbara sees the sign honoring Gary as a form of recognition to all who served in the war.

“I think of him as being like a poster boy for the rest of them,” she said.

Asked if her brother would be pleased, Barbara said, “I can just see him grinning at it. I know my mom and dad would be thrilled that he’s being honored in this way.”