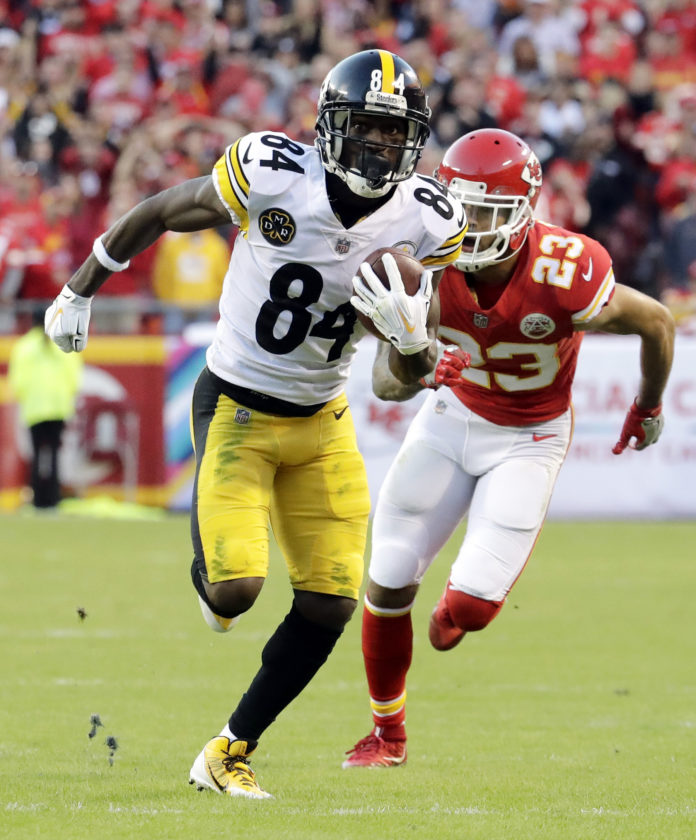 HEADED TO THE END ZONE — Pittsburgh Steelers wide receiver Antonio Brown runs for a touchdown ahead of Kansas City Chiefs defensive back Phillip Gaines during the second half of an NFL football game against the Kansas City Chiefs in Kansas City, Mo., Sunday. -- Associated Press

Beating up the goal-post padding, too.

The Steelers’ star running back churned out 179 yards and a touchdown in a performance reminiscent of January’s playoff victory over Kansas City. And Antonio Brown made an acrobatic touchdown catch in the fourth quarter to help Pittsburgh hand the Chiefs a 19-13 loss — their first of the season.

“The biggest thing for us is getting wins,” said Bell, who drew a flag for celebrating his score by throwing haymakers at the goal-post stanchion. “As a team, we find ways to get wins.”

The Chiefs (5-1) still had a chance after Brown’s 51-yard reception made it 19-10, moving quickly downfield and getting a 33-yard field goal from Harrison Butker.

Their defense forced a quick three-and-out, and Tyreek Hill’s 32-yard punt return gave them the ball with 1:48 to go.

But after the Steelers (4-2) gave up a first down, James Harrison sacked Alex Smith on third-and-10, and the quarterback’s incomplete pass on fourth down left the NFL with no unbeaten teams.

“We straightened a few things out the second half. That’s how we got back in the game,” said Chiefs coach Andy Reid, who will no doubt be questioned for going for it on fourth-and-2 at the Steelers 4 early in the fourth quarter, rather than kicking a field goal to get within 12-6.

Smith’s throw to the end zone fell incomplete and the Steelers took possession.

“My gut tells me what to do. I thought that was the right thing there,” Reid said. “I’m preaching to the team to stay aggressive without being stupid, staying aggressive with it. We had a good play in our pocket that we felt good about. It didn’t work out.”

Very little worked out for the Chiefs on Sunday.

Ben Roethlisberger was 17 of 25 for 252 yards with a touchdown and a pick for Pittsburgh, bouncing back from his abysmal five-interception performance against Jacksonville last week.

His favorite target was Brown, who a few weeks ago was flipping over water coolers but spent Sunday slinging high-fives. He had eight catches for 155 yards, often beating star cornerback Marcus Peters.

“The last little touchdown or whatever, should’ve been an interception,” Peters said. “It comes with the game of football. Can’t do (anything) about it. … We took an ‘L,’ back to the drawing board.”

The game in many ways resembled January’s playoff game at Arrowhead Stadium, when Bell churned for 170 yards rushing and the Steelers’ defense shut down the Chiefs in an 18-16 victory.

Their defensive dominance was even more impressive considering the circumstances: The Steelers allowed more than 200 yards rushing twice in the past three weeks, while Kansas City was averaging 32.8 points and 414.2 yards — and had just piled up 450 in a shootout victory over Houston.

But the Steelers held Kareem Hunt, the league’s leading rusher, to 21 yards on nine carries. They also spent the afternoon with their paws on Smith, holding the NFL’s top-rated passer to 246 yards and a TD.

“We’ve played a lot of games against each other. These guys have gotten the last three,” Smith said. “They’re all hard-fought. They’ve been physical, intense.”

Smith nearly rallied the Chiefs down the stretch this time, finding De’Anthony Thomas for a 57-yard touchdown that got Kansas City within 12-10 with 6:13 left in the game.

But the Steelers answered with Bell, whose hard running got them near midfield. And when they faced third-and-2, former Chiefs coach and Steelers offensive coordinator Todd Haley dialed up a pass down the sideline to Brown, who caught the tipped ball and ran it 51 yards for the score.

“Ben made a great throw and those guys couldn’t catch it,” he said. “He always puts the ball in perfect position and, in that case, he held the ball until the last minute and made a play. I tracked it the whole time. He put a lot of wing on it and I was able to get the bounce.”

Roethlisberger improved to 7-1 against Kansas City. He’s won six straight when coming off a game in which he’s thrown at least three picks. … Pittsburgh has beaten a team 5-0 or better seven times in the Super Bowl era. … Smith has not thrown an interception in 202 attempts. … Hunt had five catches for 89 yards. … Chiefs TE Travis Kelce caught a pass in his 54th straight game.

The Chiefs’ first turnover since their first offensive play of the season came in the first half, when backup center Zach Fulton snapped the ball over Smith’s head for a safety. But the Steelers gave the ball right back when they inexplicably decided not to field the ensuing free kick.

Steelers RT Marcus Gilbert, who had missed three weeks with a hamstring injury, left in the first half after aggravating it. LB Vince Williams left in the second half with a hip injury after picking up a pair of sacks. … Chiefs RB Charcandrick West was evaluated for a concussion.