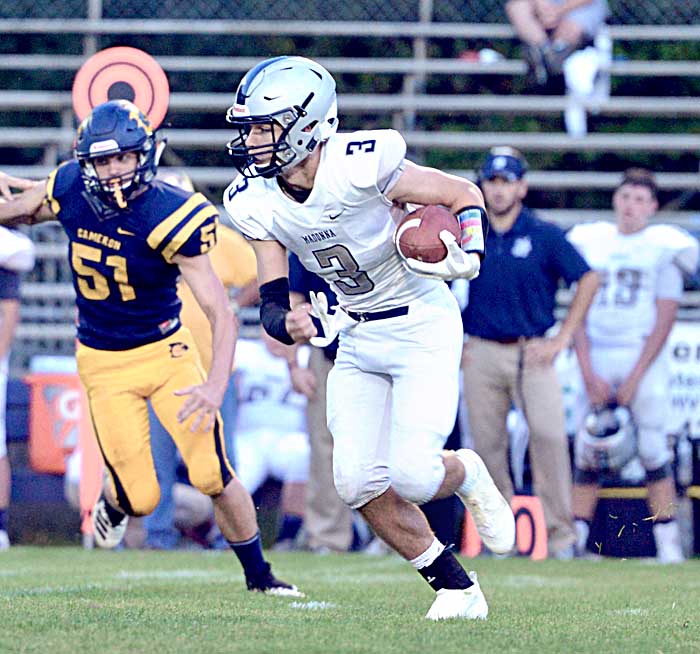 CAMERON — There were an even 100 yards worth of penalties, and the offense struggled to sustain drives. Cameron’s Scott Holt had to find something to coach up next week.

The Dragons’ swarming defense limited Madonna (3-2) to 110 yards and forced six turnovers — five interceptions — in a 46-0 shutout Friday night at Dragon Field, in a game in which the clock ran throughout the fourth quarter.

Andrew Ritchea continued his big first half of the season for Cameron (5-0), running for 152 yards and three scores on 15 carries as his team piled up 352 total on the ground.

“Our kids do a fantastic job of making (runners) stop,” Holt said. “Earlier in the week, I talked about if we could make them stop and try to change direction, we’d be pretty successful. Our kids continue to prove they’re one of the quickest defenses Cameron has ever had. When you have to stop for just a second because of one guy, there’s three or four more bearing down on you.”

Blue Dons coach Darrin Hicks will attest to that. His leading rusher, Gavin Dietrich, gained 21 yards on 17 carries. As a team, Madonna was limited to 24 yards on 28 running attempts.

“They had really good linebacker play. They were shooting gaps and moving some guys around,” Hicks said. “We thought ahead of time they would be physical. Their front six — maybe even their front eight — I thought was really the difference for them.”

Ironically, it’s the secondary that will get the notoriety. Travis Mickey and Noah Neely each had two interceptions, with the latter taking his first back 54 yards for a touchdown to give Cameron, ranked No. 6 in the WVSSAC ratings, a 14-0 lead with 2:53 remaining in the first quarter.

“That play was huge,” Holt said. “I talked about our struggles with rhythm, and I think we probably disrupt a lot of teams’ rhythm to where when you take a team like that putting them in a second-and-10 situation, is sometimes a difficult thing.

“But, give Madonna a lot of credit. They were doing some things on both sides of the ball that gave us trouble. When somebody looks at this film, they’re going to find a really nice job by their coaching staff of putting that together.”

A snap over the head of the Blue Dons punter set the Dragons up for their lone second-quarter score. A seven-play drive that was highlighted by quarterback Aidan Lucey buying extra time before floating a perfect 25-yard strike to Matthew Ritchea ended when Andrew Ritchea went in from the 6 to make it a 20-0 halftime advantage.

Cameron had 134 yards of offense in that first half but exploded for 26 third-quarter points to ice the game.

A nice Madonna drive was thwarted when Mickey picked off a pass, giving the Dragons the ball at their 16. One play and 84 yards later, Andrew Ritchea was in the end zone.

Garrett Scott scooped up a fumble moments later to give Cameron the ball at the Madonna 17. Andrew Ritchea made the Blue Dons pay again, going in from the 3.

Neely intercepted a pass on the next Dons possession, and Matthew Ritchea, who opened the scoring with a 1-yard run, rumbled into the end zone from 55 yards on the first play. Jessop Broughton got into the act with an interception on the very next play and finished the ensuing drive with a 29-yard TD run to close the scoring.

“Way too many internal mistakes and that’s on me,” Hicks said. “Obviously, I didn’t do enough to get these guys prepared to play a really good football team. I take every bit of the responsibility for the loss (because) the boys played their hearts out.

“Too many interceptions and penalties and those kind of things. That’s not the type of game we want to get into because we want to establish the run.”

The victory is the 24th in the last 25 regular season games for the Dragons, something that Holt said should be a point of pride.

“These kids deserve all the accolades they get,” Holt said. “They listen to us and, not only have they probably exceeded expectations on the field, but off the field they have done an excellent job of representing themselves in school in the class room and in the community.”