Colabella comes off bench to bring West Liberty back 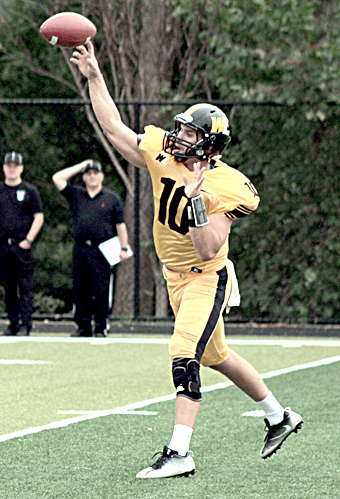 Remarkably, coach Roger Waialae’s team found a way to rally for a 23-17 victory against Virginia-Wise.

Things went from horrendous to whatever is worse than that for West Liberty at the tail end of the first half. There was a long delay as tailback Savion Johnson, a former All-West Virginia player and state champion at Wheeling Park, screamed in pain while lying inside the 5-yard line after being rolled up on by a Virginia-Wise player.

Johnson was later wheeled off the field on a stretcher, the victim of what his father, Daryl Johnson, said later was a broken fibula and a dislocated ankle. Not long after, on the half’s final play, Hilltoppers quarterback Zach Phillips lost the football and was scooped up by the Cavaliers’ Buster Henderson, who went 51 yards for a stunning touchdown and a 17-13 halftime lead.

“I’m on the phones and my aggressive nature from that area of the field, I’m going to go for it every time. So, that’s the one time it came back to burn me,” Waialae said. “The effect it had on the team, the first thing I did was pull the team all together.

“Halftime there were 100 out of 100 kids, and we came into get a ‘break’ and it’s normally ‘family’ or “win” and, for all of them, it was “win this one for ‘Sa’.’ It refocused us on things that are important, and Savion’s health is important to our team and our family.”

For players like cornerback Josh Ojo, it was a tough pill to swallow.

“He’s been battling through so many injuries, and he is tough as nails. It (stinks) to see him go down like that,” Ojo said. “I wish nothing but the best for him, and I can’t wait to see him because I think he needs us a lot right now.

“He’s as tough as they come, I can tell you that right now. I wish him well, and I hope he gets well soon.”

The game, as it always does, had to go on.

The West Liberty (2-2 overall, 2-2 Mountain East Conference) defense and backup quarterback Brenton Colabella, a Catholic Central graduate who replaced a hobbled Phillips after halftime, made sure the day did not end in a total loss. Led by Ojo who made two more interceptions to give him five in four games, the Toppers limited the Cavaliers (1-3, 1-3) 219 total yards and forced four turnovers.

“The defense stood its ground, and they realize it doesn’t matter if it’s 3-nothing or 99-to-100, as long as we make one more play that’s it,” Waialae said. “The emotional switch wasn’t from me, it was from the kids because they wanted to do something for Savion because he’s (had) bad luck with injuries since he has been in high school.

“He’s a helluva football player. He’s had two shoulder surgeries and a knee surgery. He’s as tough a kid as I have ever coached, and I am not just saying that. To come through the injuries he’s had and still come back to make it to 100 percent is a tribute to him and his family and how much he loves the game of football.”

WLU got to within 17-16 on the third of Owen Rozanc’s three field goals, this one from 27 yards, with 16.6 seconds left in the third quarter.

It put the finishing touches on things with a four-play, 47-yard drive that was set up by Osman Kargbo’s 22-yard punt return. A personal foul on the Cavaliers and a 12-yard hookup between Colabella and Isaiah Robinson put the ball at the Wise 18. Two players later, Colabella found Shane Phillips, who barely practiced this week because of injury, in the end zone for a 13-yard score that proved the game-winner.

“I just know I am one play away (from being in the game),” Colabella said. “They were playing cover-1, and we knew that all week. They are very good at it.

“I knew that if I put it up anywhere around Shane that he was going to go up and make a play.”

But, that defense needed one more stop and, fittingly, it was Ojo who made it with a toe-tapping interception along the home sideline.

“The defensive line is so good at putting pressure on the quarterback, and I’ve got to give it to them. They hurried that quarterback all day,” Ojo said. “How our defense is run, we all just have to do our 1/11th, and we’re going to get picks.

“I believe we have the best secondary in this conference and, when the defensive line does its job, stuff like that happens.”

Wise struck first as Tanner Bernard hit Kaian Duverger for a 21-yard TD. WLU countered with a 33-yard connection from Zach Phillips to Kargbo, who finished with two catches and 71 yards.

The defense was led by Cliff Clark’s 12.5 tackles.