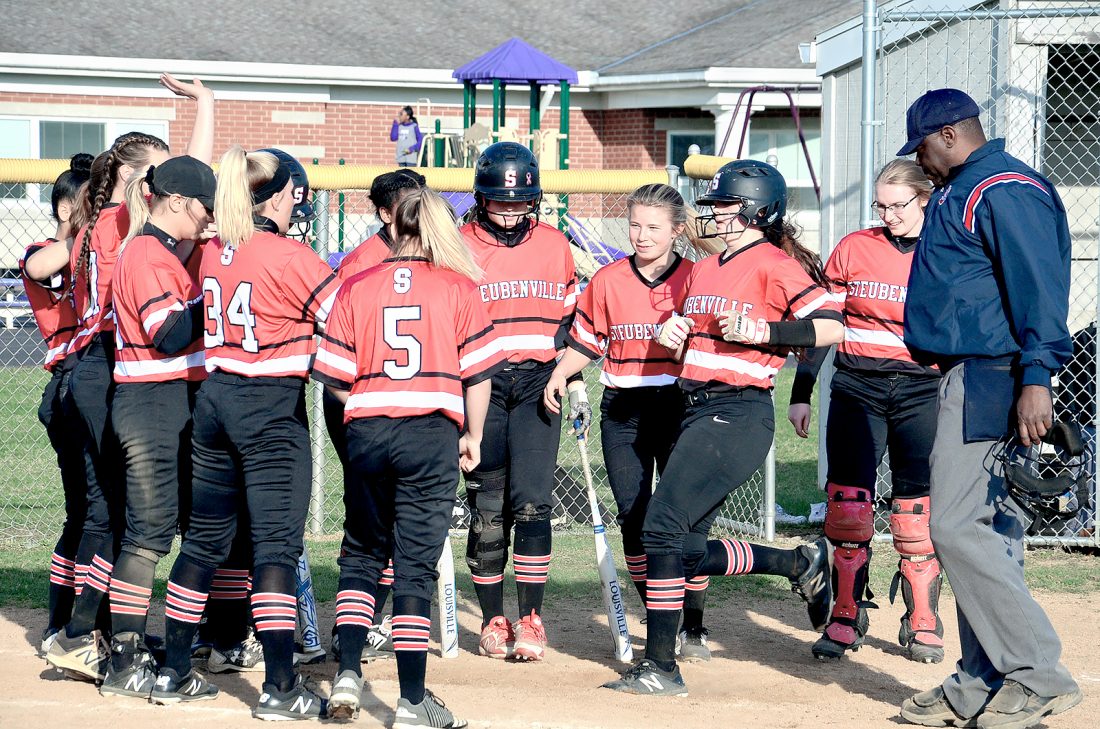 MARTINS FERRY — If one didn’t know who won the Steubenville at Martins Ferry softball game Wednesday night, he or she sure couldn’t tell it by either head coach’s postgame comments.

“We make too many bonehead mistakes,” he said while shaking his head. “We do too many things that put us in bad positions. We are 8-2 and, in every game, we continually make the same mistakes. It’s getting frustrating.”

However, when a team bangs out 14 hits, it can afford a mistake or two.

“I was hoping a letdown didn’t come, but we’ve been playing pretty well,” Martins Ferry head coach Paige Williams said as her team’s six-game winning streak came to a screeching halt. “You can’t have that many mental mistakes against a team like Steubenville because they will make you pay for your mistakes.

“They are a good hitting team, and we knew that coming in. They also play very good defense, but we didn’t make it very difficult for them today.”

Madison Fields singled three times, hit a solo homer in the sixth and picked up the win in relief of Stef Blackburn.

“What do you say about her that you didn’t say the day before,” DiMarzio said. “She’s a great kid, a tough kid. She battles and she’s a bulldog. She rubs off on everyone and is a good leader.”

Mary Marshall doubled to right-center to knock in two runs in the top of the first. Raven Banks followed with a run-scoring single through the hole at short, as Steubenville jumped out to a 3-0 lead. Sammy Cucarese made it 4-0 in the second with an RBI single.

The Purple Riders (8-3) got one run back in the second on Jaden Stalder’s sacrifice fly that scored courtesy runner Kara Kapiskosky, who took over on the basepaths after Hunter Pollock doubled to deep right.

A three-run fourth gave Big Red some breathing room. Lakyn Blackburn singled in a pair, and Banks drew a bases-loaded walk. The margin increased to 7-1.

Pollock made it 7-3 in the bottom of the inning when she cleared the fence in right-center with a runner aboard.

“She’s been doing real well for us,” Williams said of her freshman catcher. “She’s kind of been looking for that first home run, so maybe this will take the edge off for her. She’s pretty hard on herself.”

Cucarese picked up an RBI with a groundout in the fifth before Fields completed the scoring in the sixth.

“We just need to put this game behind us and get ready for the next one,” Williams said.