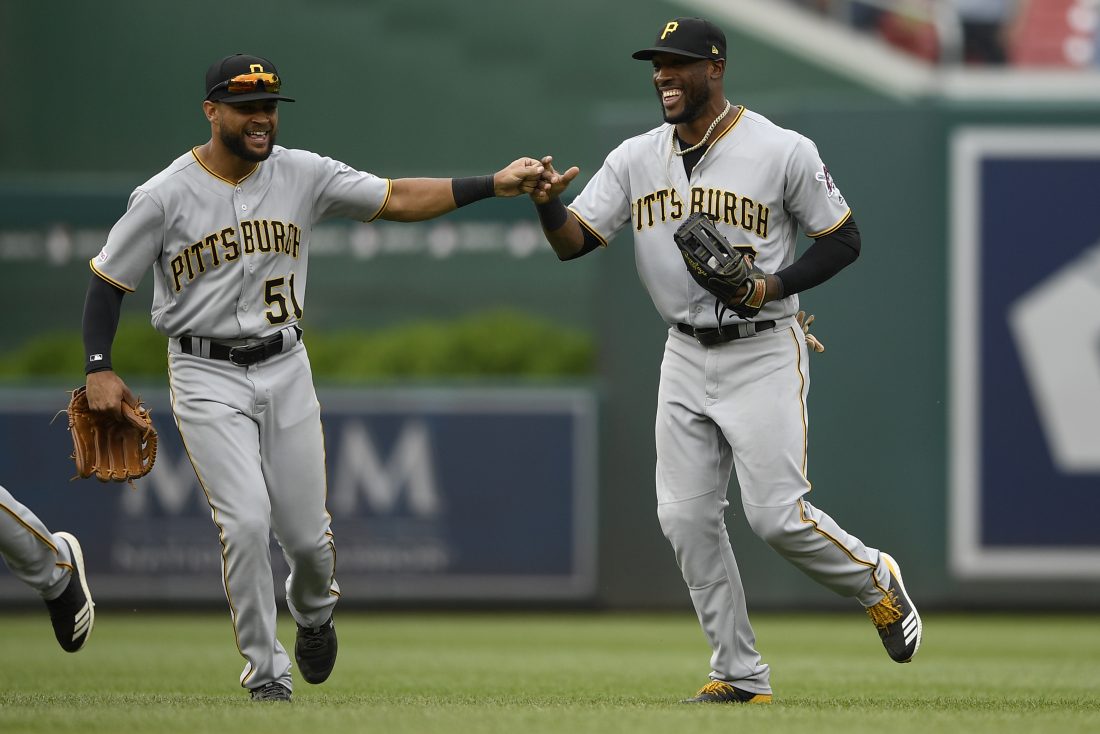 WASHINGTON (AP) — Faced with the based loaded, two outs and one of baseball’s hottest hitters at the plate in the bottom of the ninth inning, there was nowhere Felipe V’zquez wanted to be more than on the mound at Nationals Park.

The Pittsburgh Pirates relief ace then coaxed a flyball from Anthony Rendon to cap a two-inning outing Sunday and preserve a 4-3 victory over the Washington Nationals.

“I like that excitement,” V’zquez said. “He’s a good hitter right now and he’s been hitting the ball everywhere. For me, that’s a challenge. I take every hitter like him as a challenge.”

Rookie Jason Martin’s ground-rule double in the ninth inning off Wander Suero (1-1) scored Josh Bell to provide the go-ahead run for the Pirates.

“I was trying to locate it a little differently,” Suero said of the curveball Martin hit. “I was trying to get it on the dirt for him to chase it. Unfortunately, I hung it just a little bit and he made contact.”

That set up V’zquez (1-0), who pitched a scoreless eighth, to finish out the victory. He loaded the bases on a single, a walk and Adam Eaton’s bunt single with one out, but struck out Howie Kendrick.

That brought up Rendon, who is hitting .400 with six homers in 55 at-bats. On the sixth pitch, Rendon lofted a fly to center to end the game and secure Pittsburgh’s first series victory at Nationals Park since 2013.

“I made my own jam, so I had to get out and I worked my way through,” V’zquez said.

V’zquez, who pitched parts of two seasons for Washington before he was dealt to Pittsburgh in 2016, blossomed into an All-Star last year. He has yet to allow a run in 8 2/3 innings this season.

“The guy is incredibly talented,” Pittsburgh manager Clint Hurdle said. “When you see him at 100 on his 42nd pitch, and basically you saw the velocity trend up throughout the outing.”

“Just the focus, that competitive spirit, and you’re going against a guy with a 10-game streak of extra base hits and he got a hit earlier and the bases are loaded. It’s all good stuff, and he loves those situations,” he said.

Washington starter Max Scherzer allowed three runs and seven hits while working a season-high eight innings. He struck out seven. He gave way to Suero, who walked Bell to lead off the ninth and moved to second on Colin Moran’s grounder.

With two outs, Martin hit a ground-rule double to left for his second major league RBI.

“He got some big outs and then he just couldn’t finish that last pitch,” Washington manager Dave Martinez said.

The inning compounded Washington’s early-season relief woes. The Nationals entered the day with the worst bullpen ERA in the majors and it rose to 7.75.

Rendon extended his hitting streak to a career-high 13 games with a single in the sixth.

Archer dropped his appeal and began serving a five-game suspension for setting off a benches-clearing altercation on April 7. Archer threw a fastball behind Cincinnati’s Derek Dietrich, who had stood and watched a long home run in his previous at-bat. Archer, who pitched seven innings Saturday against Washington, will make his next start April 21 at home against San Francisco.

Pirates: Pittsburgh has Monday off. It begins a two-game series at Detroit on Tuesday as RHP Joe Musgrove (1-0, 0.00 ERA) starts against the Tigers for the first time.

Nationals: After an off day Monday, RHP Stephen Strasburg (1-0, 5.40) starts Tuesday as Washington begins a three-game series at home against San Francisco.