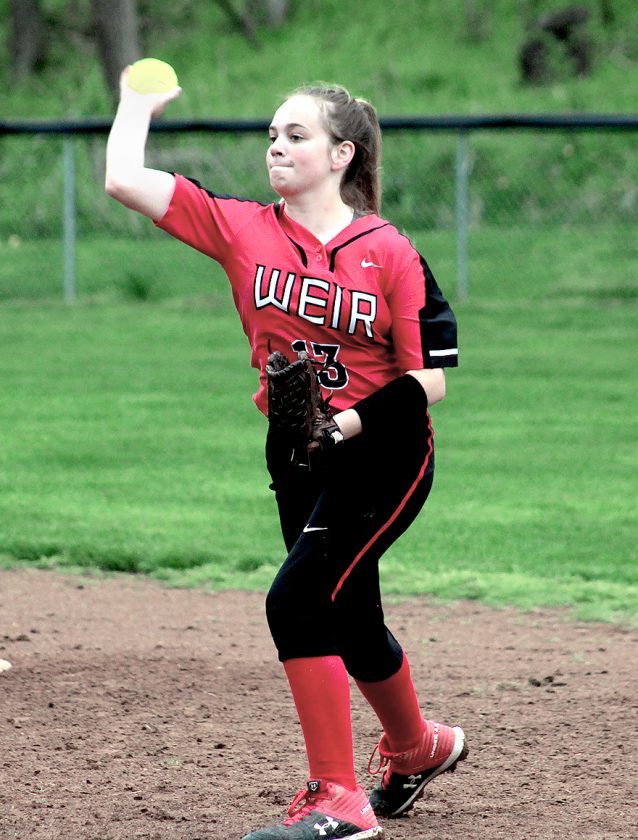 Weir High second baseman Chesney Tice throws to first for an out against Edison on Thursday. (Photo by Joe Catullo)

RICHMOND — Throughout every game Weir High softball coach Frank Sisinni has coached and played in throughout the years, something happened with his club’s road victory against Edison on Thursday that he’s never witnessed before.

And, with a handful of days before the West Virginia Class AA sectional tournament begins, he’s hoping it will not ruin what the Red Riders have built during their last 17 contests.

Weir High had another solid day at the plate, winning 10-8. Even with the Wildcats hanging around and making things interesting, any momentum the Red Riders (17-10) grabbed came to a screeching halt in the top of the sixth inning.

Ace pitcher and cleanup hitter Liv Rosnick was due to lead off that frame. Instead, she said that she didn’t want to play if Weir High didn’t want to play as a team, left the dugout and decided not to play anymore. She returned briefly in the bottom of the sixth to retrieve her belongings before leaving for good.

The Red Riders, leading 8-7 when that unfolded, played with eight girls the rest of the game.

In a way, maybe the Red Riders did gain momentum when the contest concluded because they still won. They just might have to try to keep it going with less than 10 players on the roster.

Sisinni was taking his spot at third base when the situation came about, so he could not comment in detail what happened.

“It was just an internal issue. I thought I’ve seen it all, but this is a first for me,” he said. “We’re already in a jam with numbers, so we had some team issues we’ve dealt with this week. It’s quality over quantity in terms of numbers with our small amount of kids.”

After Rosnick exited, her turn in the lineup became an automatic out. Despite that, Weir High tacked on two insurance runs. With two away in the sixth, Mallory Rosnick scored on a wild pitch. Then, Chesney Tice roped an RBI double.

“I believe we can turn this into a positive,” Sisinni said. “We had a lot of leadership that stepped up today, and we took over the situation. For us, it’s a step forward that I didn’t anticipate, but we’ll take it. We have three days to figure it out.”

Despite what will come of this situation, Liv Rosnick did help secure a victory for starting pitcher Sam Kaczmarek.

With the Red Riders leading 8-3 in the bottom of the fifth, Edison (9-12) cranked three home runs — solo shots from Mikayla Petrisko and Hannah Christoff, as well as a two-run bomb from Kiley Babel — to cut the deficit to 8-7. Liv Rosnick entered, walked the first batter but got the next two to end the threat.

“It was just a battle of two teams playing ball and trying to get better,” Edison head coach Spencer Bendle said. “Weir outplayed us today. Maybe it’s more because they’re a confident team and have been winning a lot of games, and we haven’t. They were a much stronger team mentally then we were today, and that’s probably the difference.”

Madison Angus had the undaunting task of taking over in the circle with only two outfielders. Yet, right fielder Alexis Adams calmed the team and Angus. While playing right-center, she tracked down a long fly ball hit to right and made a diving catch.

The Wildcats were down to their final strike in the seventh when they finally took advantage of the situation. Christoff hit a double to left field that would have been a single if a left fielder was present. Next up, Gabby Carpenter blooped an RBI single to right field and reached second on the throw to home. Angus, though, struck out the final batter to end the game.

Overall, every Weir High batter had at least one hit, and six finished with two. Sophia Mikula tallied a single and a two-run double. Bella Aperfine also singled and doubled, while driving home one. She, Angus and Kaczmarek drew bases-loaded walks during a four-run fifth inning.

Weir High trailed by one run on two different occasions but overcame those odds.

“We picked up where we left off from the (Steubenville Catholic) Central and Madonna games,” Sisinni said. “We put the ball hard in play. We got the help we needed from their end. But, from our end, our kids are very disciplined in drawing the walks. On thing we stress about is being disciplined in the box.”

For Edison, four players finished with multiple hits. Along with her solo home run, Petrisko doubled, reached on an error and scored twice. Babel singled to go along with her two-run homer. Maddie Benstruhl had two singles, an RBI and a sacrifice bunt. Kennadie McElroy went the distance, walking five and striking out none.

“Our biggest enemy normally is not our opponent — it’s ourself,” Bendle said. “We continuously hurt ourself, whether it’s free passes, passed balls or not making routine plays. That has been our story all year long. It’s normally not the team we play, even though we play a very competitive schedule.

“The golden question is how do you overcome that? We just try to work through it with game experience and pressure situations. Hopefully, they learn from each and every outing, and hopefully it doesn’t carry over. It’s been a frustrating struggle to play clean innings defensively.”

Before Thursday’s game, seedings for the Class AA tournament were announced. Weir High is third seed and will face No. 2 East Fairmont in a doubleheader on Monday in a best-of-three series. The third game, if necessary, will be played on Tuesday. All games will take place in East Fairmont.

Oak Glen grabbed the top seed and will begin on Wednesday. It will face the winner of No. 4 North Marion/No. 5 Fairmont Senior in a home doubleheader. The third game will be on Thursday if need be.

The championship doubleheader will occur on Friday, and the third and final game will be held on Saturday, if necessary.

“It fell the right way. Oak Glen is a solid No. 1, and we know that. It fell where we thought it would fall,” Sisinni said. “We’ll be on the road, but we’re OK with that because we played down there this year in a tight contest. We’re confident going down there. Maybe we’ll be able to face Oak Glen, but we have to worry about East Fairmont first.”

PLAYING THROUGH THE RAIN

A consistent light rain fell throughout the game. Unless there was a downpour, both teams wanted to play no matter what, even though the game essentially meant nothing for Weir High because of the tournament draw earlier in the day.

“I’ve been wanting to get Spencer Bendle on the schedule,” Sisinni said. “I know he has a ton of experience and a quality program. When we put the schedule together, we wanted to have challenging games right before tournament time. This is the first time Weir and Edison have played against each other in a long time, so hopefully this turns into something.

“I think we’re right up there with the most games played in the valley. Talking with the other coaches, we don’t want to practice in the gym. We want to get out and play regardless of the weather.”

The game meant something for Edison, as the Ohio softball tournament draw is on Sunday.

Thursday’s victory marked the conclusion of the regular season for the Red Riders. After starting off 3-7 and missing the OVAC tournament, they finished with 14 victories in their last 17 contests.

Weir High: Begins the tournament at roughly 4:30 p.m. on Monday at East Fairmont.