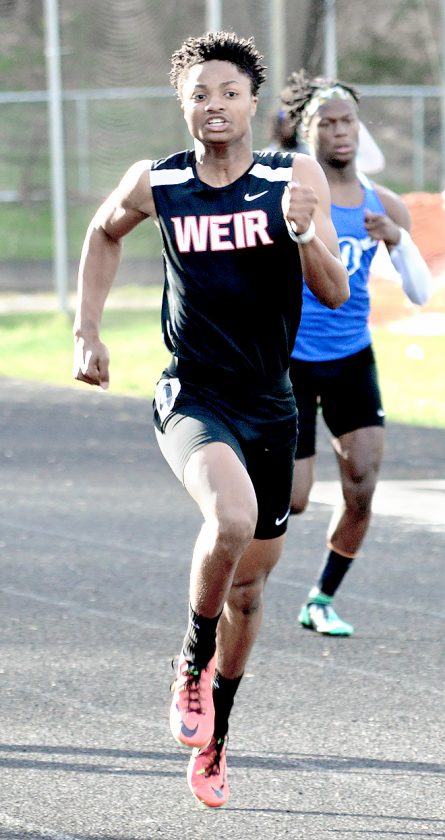 WHEELING — It has been quite the week for Weir High’s Sebastian Spencer.

Three days ago, he belted his first home run of his high school career on the baseball diamond. On Saturday, he continued his dominace on the track. Against a competitive field, the junior claimed a pair of victories in the 100- and 200-meter dashes at the Dick Dei Track Classic at Wheeling Park High School.

Wheeling Park had two victories on the girls’ side, as Aaliyah Speights, Aubrey Wiethe, Amari Poole and Abby Snedeker broke the meet record timing in at 50.52. Wiethe, Marlee Porter, Alex Knight and Tasia Walker claimed gold in the shutter hurdle relay with a time of 67.40.

On the boys’ side, Justin Levelle, Sincere Sinclair, Shaheed Jackson Mayfield and Torrence Walker crossed the line in a time of 43.57 to claim the top spot on the podium .

“The good thing is we PR’d,” Wheeling Park coach Bryan Arbes said. “We made some changes in the girls’ shuttle and the girls’ 4×2 and we still put up times. In the girls’ 4×1, we PR’d by a full second. Boys’ 4×1, 4×2, we blew it out of the water, 43.5. We were just happy with that. Then we had some guys and girls in the finals that we maybe weren’t expecting to get there with the level of competition. But they came out and showed up ready to compete. All a good day. A long day, but a good one.”

“It was a great experience to come out here,” Trotwood-Madison coach Jerel Freeman said. “We’ve been here before in the past when I was an assistant. To come back here and to have Glenville, Dunbar, Cleveland Heights, Wheeling Park and all of the competition, it was great experience for my kids to perform well enough to come out on top.”

“I didn’t expect it to be honest with you,” Indian Hill coach Susan Savage said about the victory. “I had no idea we were even in the mix. I do have some very talented young women who work real hard. It’s fun to come out on top. Good performances (Saturday). That’s what we look for. Continued improvement as we move through the season.”

Locally, Steubenville’s T’Kayla Kelley won the 100 in a time of 12.48, while Mady Winters of Magnolia claimed the top spot in the discus with a throw of 116-04.

Zamir Youngblood of Dunbar won the High Point award for the boys.