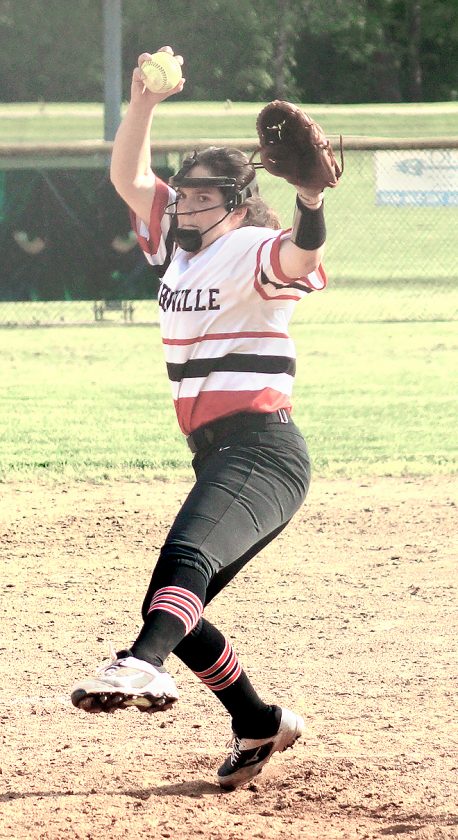 CONNORVILLE — Pitchers can make all the difference at tournament time — and the Steubenville softball team has a good one.

“At this time of the year, pitching is the most important thing,” Big Red head coach Gus DiMarzio said. “Maddie did a great job.”

Two of the Red Devils’ three hits — and their only run — came in the top of the first inning. After that, Fields shut them down, and her teammates went to work at the plate.

“Maddie is a bulldog,” DiMarzio said. “I hope that she comes back (today) with the same mentality and the same stuff because, when she does, she’s tough.”

It is the first time under DiMarzio that Big Red (19-6) has reached the district final, and he thought it could possibly be the first time for the softball program under any coach.

“I don’t think we’ve ever been there,” he said. “I’ve had some really good teams that didn’t make it. This team is just finding a way to get it done. They have good chemistry. They have things the other teams didn’t have, and it is working. Hopefully, it will keep working.

“It says a lot about this team because they are still a little bit young. They have games under their belt, but there are only two seniors. Leah (Ferguson) and Stef Mikel Blackburn take a leadership role, and the others follow. They get on the bus and go with them, and it has worked to this point.”

For St. Clairsville coach Rob Gallentine, it was an uncharacteristic offensive showing by his team, and he knew why.

“Hats off to Fields,” he said. “She was hitting her spots and had a couple of changes of speed and had us fuzzed-up. She did a good job. We only had three hits. We typically pound out 10 to 12 hits. Gus coaches them well. I wish them the best. I think they will go far.”

After St. Clairsville (15-5) pitcher Jenna Jaskowiak opened the scoring with an RBI single, Fields helped her own cause and evened the score in the bottom half with an RBI double that sailed to deep center field.

Big Red had a chance to break the game wide open in the bottom of the second. The bases were loaded and no one out after Raven Banks and Anaiya Minniefield hit back-to-back singles, and Leah Ferguson reached on the first of six St. Clairsville errors. Jaskowiak and Co. were able to limit the damage and stay close.

Maggie Cucarese singled in Banks, but Jaskowiak got a force out at the plate, a broken-bat pop-up and a fly out to end the inning with no more runs crossing.

“Unreal,” DiMarzio said. “We could have broken the game open there. Tip your hat to her. She did a good job pitching and kept us off balance for a while. We made some adjustments as a team. We moved up in the box and started to hit the ball harder.”

Big Red started to add to the lead in the fourth and fifth, before all but putting the game away in the sixth.

“I wasn’t going to let us get discouraged,” DiMarzio said. “I just told them the same thing I always tell them — keep plugging. If you keep plugging, keep playing hard, good things happen. You can’t quit. You’ve got to finish, and we did.”

Minniefield walked and scored when the Red Devils committed a three-base error when Ferguson put a ball in play. Cucarese then plated Ferguson from third with an RBI groundout to make it a 4-1 lead.

“We had six errors, which may have been the most we have had all season,” Gallentine said. “They were costly and at the most critical times.”

Minniefield singled with two outs and scored on an RBI double from Ferguson to make it 5-1.

In the sixth, Sammi Cucarese singled and scored on a Lakyn Blackburn RBI single up the middle. Fields, Mary Marshall and Raven Banks scored on two St. Clairsville errors with two outs.

“You’ve got to be able to hit the ball (in the tournament),” DiMarzio said. “We’ve been fortunate we have been hitting the ball. Hopefully, knock on wood, it continues.”

Fields started the top of the seventh with a strikeout and retired the side in order to end the game and move Big Red on.

“They are very tough to replace, but that’s part of it,” coach Gallentine said.

The district championship was originally supposed to be played Wednesday, but due to the semifinals being postponed on Monday because of rain, it will be played today, not leaving any time in between for Big Red.

“I would have liked to have gotten a day off in between,” DiMarzio said. “Sometimes, when you are hitting the ball like we are, back-to-back games is a good thing. I just don’t like it for the pitcher. It’s just a personal thing. There are probably several other coaches that do like it.”

Steubenville: Will play No. 6 seed Philo today for the East 2 District championship at Buckeye Trail. The Electrics upset No. 2 seed Indian Valley, 5-0, on Monday.