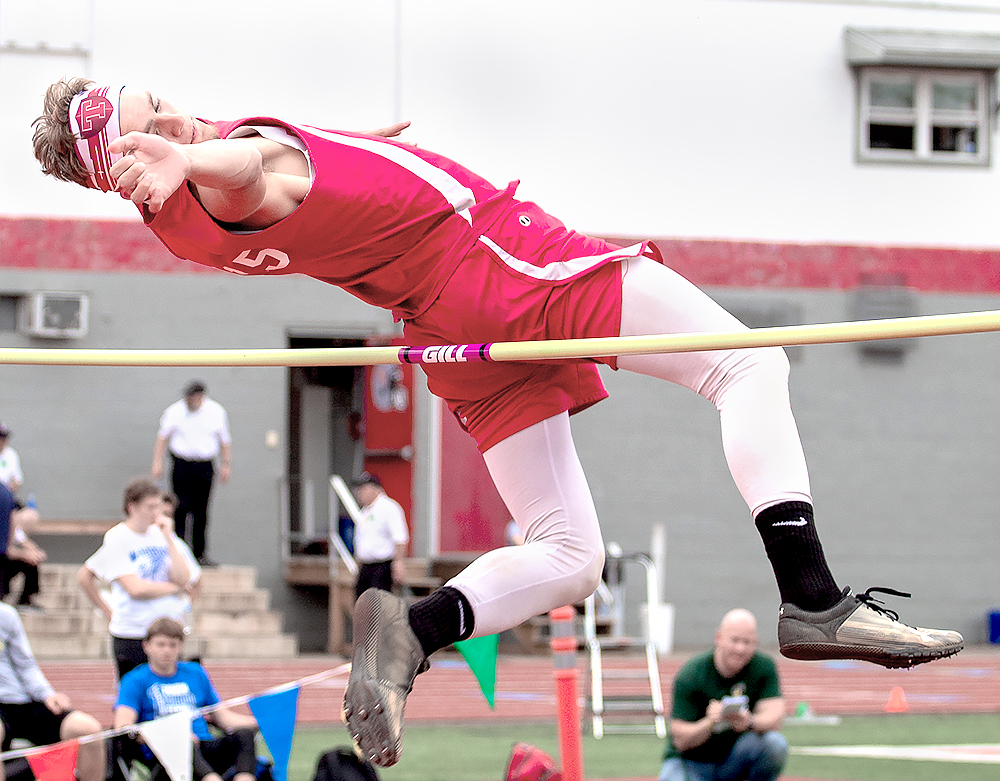 ST. CLAIRSVILLE — Not even two weather delays for lightning could deny a strong and large collection of area athletes a regional berth.

The next leg of the quest for a berth in the OHSAA’s state track and field championship begins on Wednesday when area competitors trek to Perry High School in Massillon to compete in the regional.

The Shadyside boys, who won the OVAC Class 1A/2A title on the same oval earlier this month, added a silver trophy to their season collection. Coach Jeff Campbell’s squad finished with 67 points and trailed only Garaway, which closed the 17-event competition with 78.

Fueling Shadyside’s finish was a trio of district championships.

Senior standout Chase Stewart won two of those. He claimed the 1600 and 3200 meter titles, running four laps in 4:30.09 and then came back with a 9:46.67 to win the eight-lap race. Junior Jakob Klug claimed the high hurdles to get the day rolling for the Orange in a time of 15.78. He also advanced to the regional in the intermediates thanks to a third-place finish in a time of 42.33.

Shadyside will also compete in next week’s regional in the 4×8. Pole vaulters Dale Hawthorne and Brenden Schrader nabbed bids on Tuesday.

River junior Cooper Brown had a brilliant afternoon in the sprints. The area’s premier 400 meter dasher re-wrote the River High School record book, en route to winning the lap dash in a blazing 49.82. He came back a short-time later and captured the 200 with an impressive kick in the final 50 meters. He broke the tape at 23.16. Junior Alex Rufener was fourth in the intermediate hurdles, skimming eight timbers in 42.64.

The lone Bridgeport male to advance is senior Kevin Herink, who will compete in both the shot put and discus. He was third in the iron ball on Friday with a mark of 44-9 3/4 after finishing winning the discus on the first day of the postseason.

Barnesville, which finished fourth in the team scoring, had a strong showing. The Shamrocks were led by junior Ryan Lucas’ bronze-medal performance in the 800. He ran two laps in 2:04.73. Junior Trey Ciroli was second in the 100 meter dash in 11.67. Senior Remmy Boyd was second in the high hurdles in 16.52.

Catholic Central advanced a solid delegation. In the shot put, Alec Costantini advanced with a fourth-place bid and a mark of 44-4 1/4. On the track, sophomore Joe Rohde moved on in the 800 with a runner-up finish in a time of 2:04.05.

Junior Patrick Kuebler was fourth in the 1600 in 4:44.93 to earn the right to race again. Senior Michael Hermann was third in the highs to qualify with a time of 16.63.

Monroe Central’s Joey Wise heads to Perry as the district champion in the 100 meter dash in a time of 11.57.

Beallsville’s lone qualifier was freshman Brandon Louden, who advanced in the 100 with a time of 11.72 that was good enough for third.

Toronto’s lone qualifier is junior Zach Stackhouse in the high jump. He was fourth at 6-foot.

The Crusaders notched two victories during the course of the meet. Senior speedster Rebecca Bodo had a hand in both of those. She won the 400-meter dash in 60.95 and anchored the 4×4 team, which prevailed in a time of 4:10.55. Freshman Rebecca Bolster will join Bodo at the line in the 400 semifinals this Wednesday after grabbing the silver medal. She also ran a leg on the winning 4×4. Junior Karlie Vandeborne was second in the 200 in 26.96. Freshman Clara Symington was third in the low hurdles at 49.54.

Shadyside put forth a solid effort en route to scoring 39.5 points for sixth place. Junior Kaylee Savage qualified third in the discus with a mark of 109-10.

The Tigers advanced in both the 4×4 and 4×800 relays as well. The former was fourth, while the latter was third on Tuesday.

Bellaire finished ninth in the team standings and all of its qualifiers came in the field. Freshman Katelyn Hart captured the discus throw with a mark of 120-1. Senior Brittany Falcone was second in the discus on Friday after capturing the shot put on Tuesday with a mark of 35-feet. Senior Michaela Flaherty advanced once again in the high jump. She was third during Tuesday’s action.

Bridgeport’s lone female qualifier is sophomore Meleah Tiber. She punched a regional ticket in both the high and low hurdles, finishing fourth in both races. She clocked 49.95 in the lows and 17.36 in the highs.

Buckeye Trail freshman Kathryn Williams was the district champion in both the 800 and 1600 meter runs.

Monroe Central senior Kayla Wall advanced in the 200 by virtue of a fourth-place finish in a time of 28.41.

Beallsville’s lone qualifier is junior Jadyn Gabel, who was second in the high jump at 4-10.