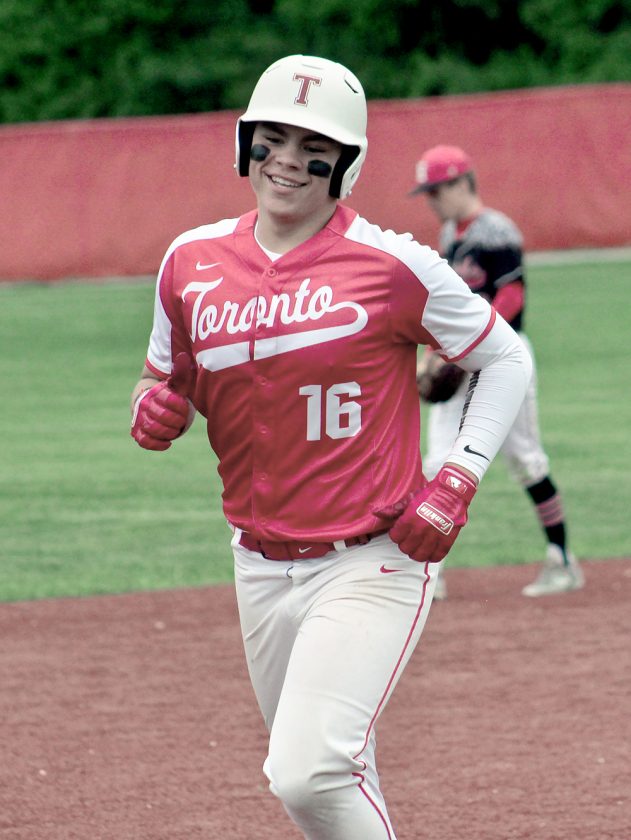 MINERVA — When it came time to decide where the Toronto baseball team wanted to place itself in the Division IV East District bracket, head coach Brian Perkins wanted to face top-seeded Berlin Hiland in the semifinal rather than the championship.

“We knew coming in that Hiland has a great tradition,” Perkins said. “Since I’ve been in Toronto for the last 26 years, we’ve played them multiple times. We don’t just want to get to the final. We knew Hiland was the top team and, if we were going to beat them, we wanted to go after them in the first game. It worked out for us today.”

Perkins also decided to go with his ace, Nate Karaffa. Along with timely hitting and solid defense, the second-seeded Red Knights shut the Hawks down, 4-0, on Monday.

On the mound, Karaffa went the distance, walking three, plunking a pair and striking out 11. Hiland (22-4) head coach Chris Dages said Karaffa was the best pitcher his Hawks faced all season.

“Nate did a great job on the mound, obviously,” Perkins said. “He got out of a few jams early. He got (his fastball) up in a lot of situations. He kept them off balance, and that’s a good team over there. The guys on defense also helped him out on balls in play. It was a total team effort.”

Karaffa got out of a two-out, bases-loaded situation in the opening frame and stranded runners at second and third with one away in the third. Overall, Hiland had runners in scoring position in four of the first five frames.

His pitch count was more than 90, while his fastball easily reached the mid- to high-80s range. He also threw the Hawks off with a nasty slider.

“Karaffa throws hard and has a great breaking ball,” Dages said. “We knew that coming in, and we just weren’t quite aggressive enough on his fastballs. We let a lot of them go by and dug ourselves a hole. We had our chances with runners on but couldn’t come through with that hit to plate some guys.”

Offensively, Karaffa was the first to dent the scoreboard. He followed a first-inning double with a two-out, two-run triple in the third, giving his squad a 2-0 advantage. Next up, Nick Sninchak drove him home with a single.

A 3-0 advantage was more than enough, but Perkins wanted one more run to officially put the game away.

Before Zac Berger could lead off the top of the seventh, Perkins called for time.

“We pulled him and said, ‘We need one more.’ It’s the first time we ever pulled him in that late,” Perkins said. “Berger obviously came up with the big hit, and he has a lot of pop in his bat. That was the one run. Against a good team like Hiland, you have to get as many as you can get.”

Ryan Hershberger started for the Hawks and took the loss. He allowed three runs on five hits, two walks and struck out five. Andy Miller pitched the final two innings, striking out four and walking none. The only hit he surrendered was the home run.

Lucas Gulczynski and Kobe Herrick each tallied a single for Toronto. All four of Hiland’s hits were singles (all from the top three hitters in the lineup), including a pair from Hershberger.

Toronto: Will face Strasburg-Franklin, a 3-0 winner over Catholic Central on Monday, for a Division IV district title at 5 p.m. Wednesday at Minerva.

“We’re very familiar with Strasburg,” Perkins said. “We’ve had the opportunity to play them here (Minerva) the last couple of years. They’ve been battles throughout, and they’ve normally come down to one play. I have nothing but respect for them.”