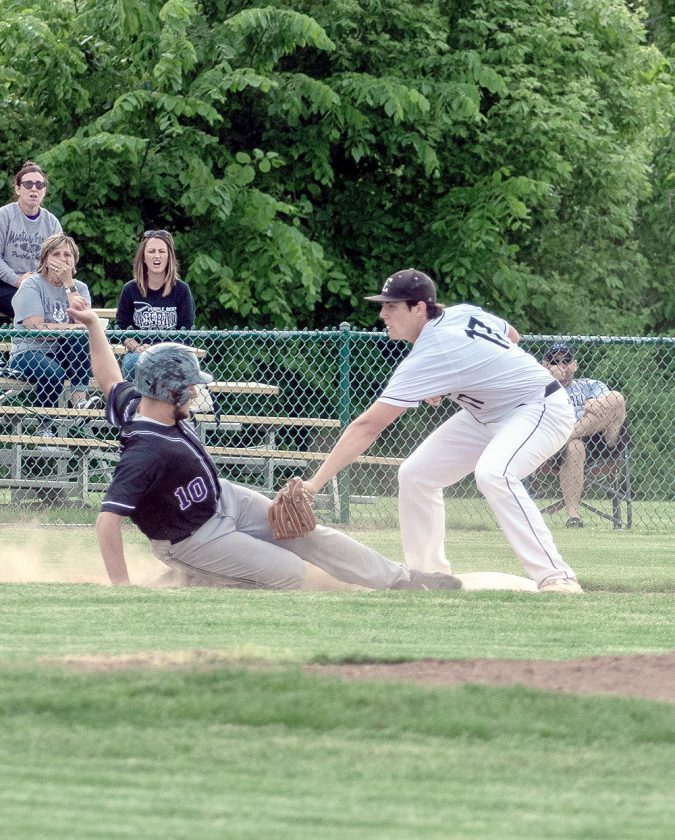 MINGO JUNCTION — The recipe remains the same, and so does the result.

The Edison baseball team played a solid all-around game against Martins Ferry, and the No. 2 seed Wildcats broke open a tie game to a 7-4 victory against the No. 10 seed Purple Riders in a Division III Eastern District semifinal Monday evening at Muth Field.

“That’s the way the game goes,” Edison (21-6) head coach Mike Collopy said. “Coming into the game, Martins Ferry was the hottest team in the district. They really swing the bats well. We knew we were going to face a good pitcher.

“Our pitchers and defense did a great job. Anthony (Sinicropi) did a great job, and then George (Ash) came in and closed it out. Offensively, we hit the ball hard, we didn’t hit it up in the air and we swung at strikes. When you have good defense and pitching and, offensively, you put the ball in play, good things are going to happen.”

The Purple Riders battled, but the Wildcats came through with a couple more clutch hits.

“They made two or three more plays in the game,” Martins Ferry (14-13) head coach Anthony Reasbeck said. “That’s baseball. That’s how it is. It comes down to who makes the most plays or gets the breaks. They made a couple of more plays than we did.”

With the win, Edison will face No. 3 seed Ridgewood in the district final at 5 p.m. Wednesday at Sandy Valley. Ridgewood advanced by defeating No. 1 seed Barnesville, 7-1, Monday at Muskingum University’s McConagha Stadium.

“We have to get ready to play,” Collopy said. “Our kids work hard. Every time you get to this point, you want the kids to have fun and to enjoy it. Moments like this, you will remember forever. You make a lot of memories in high school, and they will remember this one. We want the guys to create memories that will last a long time.”

Drake Dobson took the loss for Martins Ferry. He struck out three, walked eight and allowed seven runs on eight hits in five innings. Trevor Hanson came on to pitch during the sixth. He did not strike out or walk a batter, nor did he give up a run in his one inning of work. Hanson did give up two hits.

Sinicropi singled and produced a run-scoring triple for the Wildcats. Alec McBane belted a single, a double and recorded an RBI. Conrad Gump contributed two singles and an RBI. Andrew Kinney collected a run-scoring single, and Ryan Higgs, Isaac Schmitz and Ash all added a base hit.

Martins Ferry struck first in the first. Goodard doubled to start the game, and he scored on a fielding error with two outs to put the Purple Riders out in front, 1-0.

Edison responded and ended up scoring a pair runs in the bottom half of the inning to take a 2-1 lead. The Wildcats scored one run on a fielding error, and the other run scored on a wild pitch.

“The guys responded,” Collopy said. “We have a process we go to. We were able to answer them. That is what we want to do. We want to win the inning and have big innings.”

The Purple Riders responded right back and tied the score in the second when a run scored on a double play.

The game was not tied for long. Riley Watson led off the second with a walk for the Wildcats, and he scored on a triple by Sinicropi to regain the lead for Edison at 3-2.

Martins Ferry answered the call again in the third, as Goff singled home a run with a two-out knock to knot the score at 3.

Edison regained the advantage in the fourth thanks to a pair of runners crossing the plate. Gump plated the first run with a base hit, and McBane brought home the score on a sacrifice fly, enabling the Wildcats to take a 5-3 lead.

The victors scored two more runs in the sixth to build a 7-3 advantage. Kinney collected the lone RBI in the inning on a run-scoring single.

“We did what we needed to do,” Collopy said. “We swung at strikes. We left some runs out there, but when you play a good team and face a good pitcher, that is going to happen. You are not going to get every run come tournament time.”

Dobson delivered a run in the seventh on a groundout to make it 7-4, but that was as close as Martins Ferry got. Ash recorded a strikeout to end the game.

“Mike Collopy is great,” Reasbeck said. “I can’t say enough good things about Mike Collopy. There is no one else I would rather play than against him and his team. I wish Edison noting but the best going forward.”

BLAST FROM THE PAST

The Purple Riders defeated the Wildcats, 2-1, in the district final in 2017 at Muth Field.

“I’m not going to lie, I would not want to play anybody else at this point,” Collopy said. “It was another good game. The guys came in, and I don’t think they thought about that game (in 2017).”

Edison and Martins Ferry have developed a good rivalry in the past few years.”

Edison has a storied baseball history, and Martins Ferry has made plenty of noise the last few seasons.

“You can call Edison our tournament rival,” Reasbeck said. “Being able to say that is a big deal.”

The Purple Riders are losing two seniors from this year’s team. I told our underclassmen that our seniors won 60 games, three sectional titles and a district title in their careers.

Edison: Will play No. 3 seed Ridgewood in the district final at 5 p.m. Wednesday at Sandy Valley.