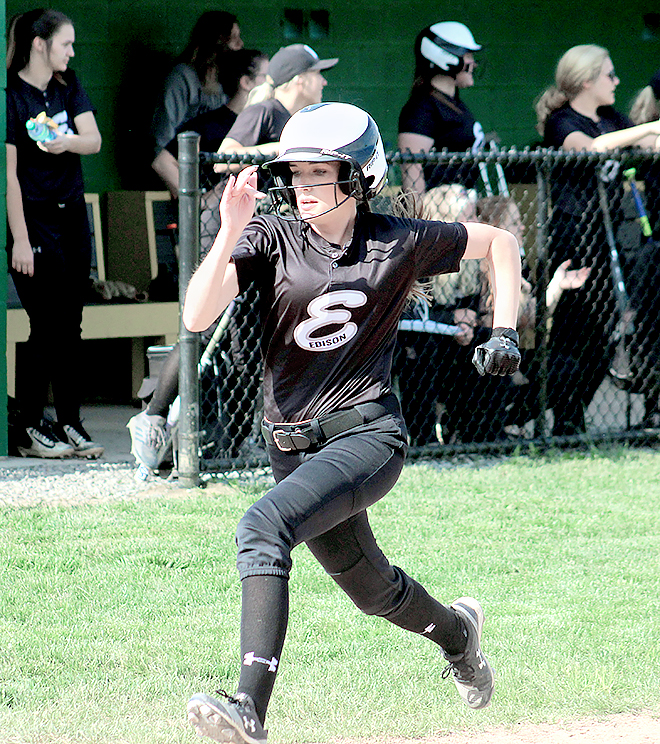 BOWERSTON — Edison’s 2019 softball campaign has been interesting to say the least, and Wednesday’s Division III district semifinal against Sandy Valley also was a head-scratcher.

The 10th-seeded Wildcats miraculously won the sectional final on a game-winning three-run homer from Kiley Babel and overcame seven errors. They did so without starting shortstop Gabby Carpenter, as well as losing center fielder and No. 5 hitter Hannah Christoff during that contest. Numbers were low to begin the season, and the growing concern got even worse.

Despite what Edison lost, it went toe-to-toe with the top-seeded Cardinals Wednesday and faced a tied game in the bottom of the fifth. Sandy Valley, though, ran away thanks to a pair of four-run innings and advanced with a 14-6 victory.

“I told the girls in the dugout it’s been a very interesting year for us,” coach Spencer Bendle said. “Our program’s gotten really low numbers this year, and it’s something that’s never been an issue at Edison for a long time. But, it was this year. We had a couple of kids quit throughout the year, so the numbers got even lower. We played today without two starters. We had to move three or four kids around for those. So, you lose two starters with our numbers already low, that’s going to hurt a little bit.

One play, a miscommunication from the Wildcats (12-16) in the top of the fifth, changed everything.

Edison began the frame down 6-4 and saw its first three batters reach base on a single and two errors. Then, with two outs, Mikayla Petrisko broke through with a game-tying two-run single.

With runners at first and third, a play was set up to maybe score Alayna Meadows. Petrisko kept inching closer to second base. When she was halfway there, Sandy Valley (17-7) catcher Emma Swiger threw to second. Meadows didn’t break for home, and Petrisko was later tagged out trying to dive back to first.

“The momentum swung a little bit in the top of the fifth inning,” Bendle said. “We tied the game but had a miscue on the bases. We grabbed momentum and gave it right back. We did that throughout the whole game. Something good would happen for us, but then we would give it right back.”

The Cardinals then loaded the bases off of three walks, with a sacrifice bunt in between, from Edison starter Kennadie McElroy, who was showing strong signs of fatigue. After throwing a ball to Gracie Fryer, Bendle brought in Meadows from left field.

Fryer then drew a bases-loaded walk. Next to the plate, Carrigan Pahanish ripped a two-run single, and Fryer scored on a errant throw to second base. Sandy Valley quickly took an 11-6 advantage.

“Our base running was atrocious to begin the game, and the errors got us behind. But, these girls have done a great job of never getting down and coming back the whole season.”

The Wildcats put fear in the Cardinals early on. Babel, who finished with four hits overall, singled home a pair in the top of the first (the second run scored on a catcher’s interference). The damage could have been worse, but back-to-back strikeouts with the bases loaded ended the threat.

“It was good to score first. I always feel that if you score first in softball, good things normally happen,” Bendle said. “It’s just that every time we scored, we gave some back. We could never hold on to the momentum.”

Holding on to a 2-1 advantage in the third, Jadden Vincenzo added to the lead with a two-out RBI single.

Sandy Valley, though, got those runs back and then some with one mighty swing from Arianna Ott, who also picked up the victory in the circle. She smashed a three-run bomb directly over the left-field foul pole to give her club a 4-3 lead. In doing so, she broke the school record for career home runs (26).

“Ari breaking the school record for home runs gave us that spark,” Geiger said. “Then, everybody throughout the whole lineup came up big with big hits.”

Edison countered thanks to Babel’s RBI base knock in the top of the fourth, tying the score at 4. The inning ended prematurely when she was tagged out attempting to reach second base.

Sandy Valley answered with RBI singles from Lilly Shepler and Ott in the bottom half to take a 6-4 lead.

“We prepared offensively for the pitcher we would see today. I think we were well prepared for that, but we really didn’t have sharp practices defensively,” Bendle said.

“It carried over to here. It’s been a problem for us all year long. Our defensive practices don’t go well, and it carries over. It’s just something we have not been able to overcome.”

Ott went the distance for Sandy Valley, allowing two earned runs on a dozen hits (all singles), one walk and striking out six.

“Throughout the game, they (Edison) hit the ball very well,” Geiger said. “They are a good hitting team and scored multiple runs throughout the season, so we expected them to have some kind of power.

“Ari came up big in key situations. I don’t know off the top of my head, but they left key runners on base throughout that could’ve changed the game. Ari settled in and got big strikeouts.”

The Wildcats said goodbye to their lone senior after the game in Shannon Bahen.

“Shannon’s been in the program for four years,” Bendle said. “She’s worked up the jayvee program and finally became a varsity starter for us and did a good job. She learned a lot about being a leader in a leadership role, especially for being the only senior. The first thing I did in the dugout was thank her for everything she’s done for us.”

Sandy Valley: Will face No. 6 seed Meadowbrook for a district title today at Strasburg-Franklin. Meadowbrook defeated fourth-seeded Coshocton, 7-0, on Wednesday. The Cardinals reached the regionals three years ago and lost in the district semifinals last season.

Foreign students weigh studying in person vs. losing their visas