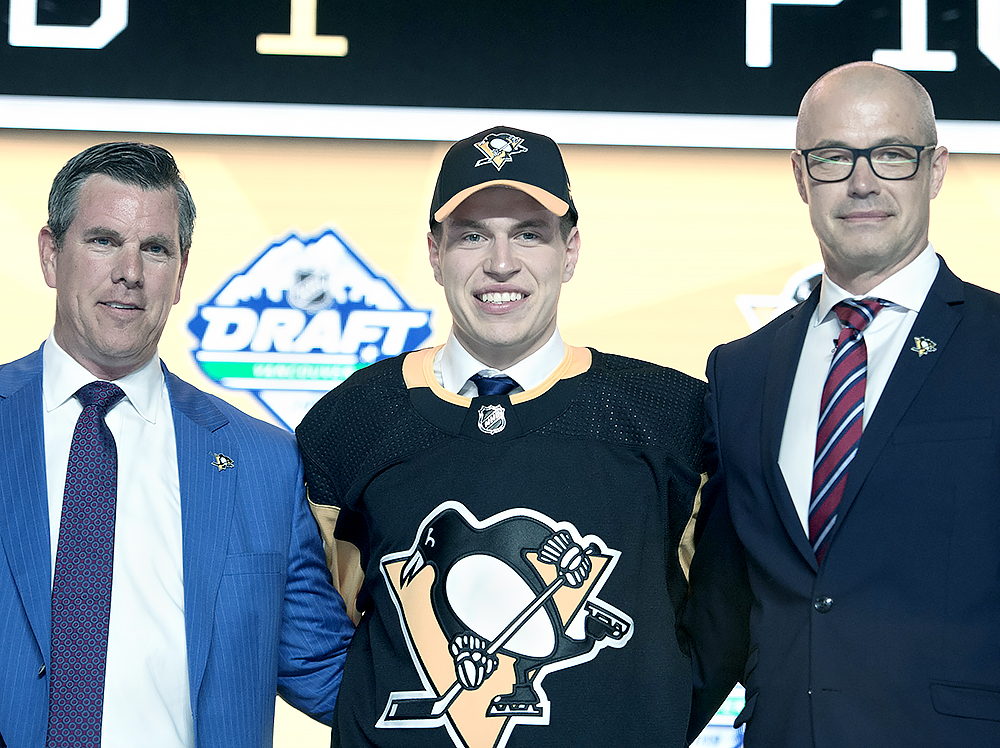 Samuel Poulin smiles after being chosen by the Pittsburgh Penguins during the first round of the NHL hockey draft Friday, June 21, 2019, in Vancouver, British Columbia. (Jonathan Hayward/The Canadian Press via AP)

Norris Trophy-winning defenseman P.K. Subban is off to New Jersey. Forward Patrick Marleau, a 21-year veteran, is headed to Carolina. And center J.T. Miller, one year into a five-year $26.25 million contract, was traded to Vancouver.

The common denominator spurring each of the trades were teams seeking to shed salaries to address more pressing roster needs before the NHL’s free agency period opens July 1. And the urgency to make the trades became more real when the league and NHL Players’ Association announced next year’s salary cap was set at $81.5 million — $1.5 million lower than initially projected.

And then there was Toronto Maple Leafs GM Kyle Dubas, who only two days ago suggested there was “a strong chance” Marleau would be back for the final year of his contract.

“I think everyone here knows how we feel about Patrick Marleau and what he has done for our organization,” Dubas said, noting he kept Marleau informed of trade talks. “We didn’t want to do one of those trades where it was moving a salary or a cap hit that was going to take anybody off our roster.”

Miller became expendable in Tampa Bay, where the Lightning are focused on re-signing center Brayden Point, also a restricted free agent. As a result, Vancouver added a versatile center while giving up journeyman minor-league goalie Marek Mazanec and two draft picks in the deal, including a conditional 2020 first-round selection

The trades started before Ottawa opened the second round by selecting American center Shane Pinto at No. 32 overall, and pushing the conclusion of the draft into the background.

The Devils came away the big winners.

A day after taking American center Jack Hughes at No. 1 overall, New Jersey acquired Subban in a trade with Nashville. The Predators picked up defensemen Steven Santini and Jeremy Davies, the 34th pick in this year’s draft and a second-rounder next year.

Subban released a video on social media in which he thanked the Predators and their fans, and then looked forward to joining the Devils.

“I just want to tell you guys, are you guys ready for The Subbanator? Because I’m ready to go,” he said.

Marleau, meanwhile, has a decision to make as to whether he’ll play for Carolina or have the team offer him a buyout.

Hurricanes GM Don Waddell said he’s open to either option. The key for Carolina in the deal was acquiring a conditional first-round pick in next year’s draft.

Columbus Blue Jackets GM Jarmo Kek–l–inen shook his head in summing up the trade from Toronto’s perspective. “So $3.8 million for a first-round pick? No thank you,” he said, noting that would’ve been the price for Toronto to buy out Marleau’s contract.

What was initially considered a deep pool of unrestricted free agents is beginning to dwindle with defenseman Erik Karlsson re-signing with San Jose, forward Skinner re-signing with Buffalo, and Philadelphia acquiring and signing center Kevin Hayes.

The first round of the draft was unusually quiet, featuring just one trade. Florida sent a second-round pick to Philadelphia to move up three spots to No. 11.

And yet, Philadelphia’s Chuck Fletcher was among several general managers predicting things would pick up.

“I think we made the only trade, didn’t we? Yeah, that’s really unusual,” Fletcher said. “But I think the fact the draft’s so early, and there’s still 10 days until the start of free agency … my expectation is there’ll still be some activity before July 1.”

Penguins GM Jim Rutherford said the lack of deals Friday was an indication of a strong pool of top prospects.

“We’ve still got a ways to go, but the draft was so strong, I don’t think people wanted to move their picks,” Rutherford said.

Rutherford said the Penguins are in a much better position to retool their roster entering the summer after trading defenseman Olli Maatta to Chicago on June 15. The trade freed up more than $4 million in cap space.

“We’re not going to be under any pressure from the cap point of view,” Rutherford said, noting it was never intention to conduct a major offseason overhaul.

As for the draft, Pinto is from Franklin Square, New York, and his selection continued a trend in which 11 American players were chosen in the first round — one short of the record set in 2016.

At 6-foot-8 and 199 pounds, Denmark’s Mads Sogaard was the second goalie taken in the draft when the Senators took him in the second round, 37th overall. Sogaard played 37 games in his first season with Medicine Hat, and ranked sixth in Canada’s Western Hockey League with a .921 save percentage.

He has the opportunity of joining Toronto’s Frederik Andersen in becoming the second Danish-born goalie to play in the NHL.