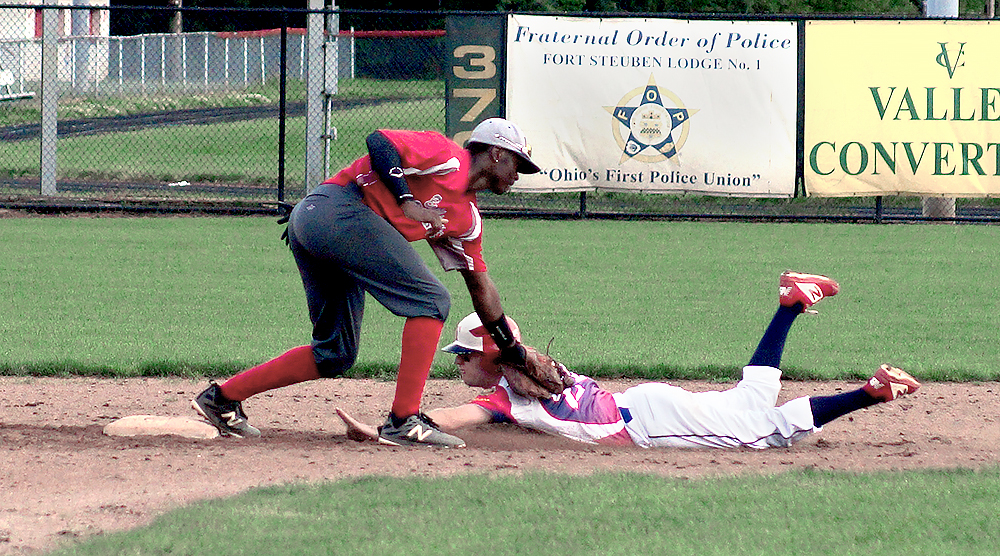 With the tying and go-ahead runs in scoring position and no one out, the Indian Creek junior was the third Post 86 pitcher to take the mound in the seventh inning. After walking the first batter he faced, he fanned two of the final three to earn the save, as Toronto topped Brilliant Post 573, 6-5.

“It’s tough to throw strikes, especially early in the season,” Amis said. “It had been a while since I’ve pitched. Once I got warmed up, it just kind of came to me. After 15 years of baseball, you don’t really think about it. You just do it.

“It’s definitely fun to be a part of this team. It was disappointing we lost our first two games, but it’s just like anything else. You get used to it and, once the season starts going, you start warming up and things start coming together. When you’ve got a group of guys that have been playing baseball this long, just not as a group, it’s a matter of time before everything starts clicking.”

With the pitching staff struggling early in the season, Amis’ performance to seal the win impressed his head coach.

“It showed a lot of composure for him to come in and get the job done like that,” Post 86 skipper Steve Sninchak said. “He is a new kid on the team, still getting to know names and that. We got better pitching tonight, and the big thing was we had no errors. The last time we played we had six errors. When you play errorless ball, you keep yourself in the game.”

Brilliant (3-3) had the bases loaded with no one out after getting within one. Amis fanned one, then Post 573 attempted a suicide squeeze. The batter missed the bunt, creating a rundown between third and home plate — the second such scenario in the inning — and Toronto catcher Conrad Gump was able to tag Cody Albaugh for the second out. Amis then ended the game with a punchout.

“It’s a barn-burner every time we play Toronto,” Brilliant head coach Keith Rejonis said. “It falls their way sometimes, and it falls our way sometimes. I might have made a bad call or two, and I have to live with that. Once we got one run, we got them loaded with no outs and thought here it is. The next guy struck out, and we knew they were looking for a double play, so I tried to create a little momentum. The kids didn’t do anything wrong, they made a nice play. We sent a kid home, and we just didn’t get the bat on the bunt.”

It gave Toronto (1-2) it’s first win of the season after getting off to a late start due to the high school team’s run to the Division IV state championship.

“We played good baseball, but we have a long way to go without a doubt,” Sninchak said. “We’re still getting our feet wet after the two-week late start. It’s big to get the first win out of the way. We have a big stretch coming up here.”

After Post 86 opened the scoring with an RBI single from Gump — his first of three hits and two RBIs — in the second inning, Brilliant got a big inning to take the lead, scoring four times with two outs.

Chase Ward singled in a run and Mason Goddard drew an RBI walk. After Toronto starter Brandon Boyd was lifted, Dasyn Hores singled in another run, and Anthony Coggins drew another bases-loaded walk off of Riley Watson to make it a 4-1 lead. The next batter popped out to leave the bases loaded.

“These kids are gelling and meshing well,” Rejonis said. “We just haven’t got our whole team together yet with vacations and all-star games. From this point on we know we are going to compete with everybody.”

“That’s the mentality of these guys,” Sninchak said. “They know they are never out of a game. Brilliant has nice ball club. We’re looking forward to playing them again.”

In the bottom of the fifth, Toronto tallied five runs to re-take control, all coming with two outs.

John Marelli doubled and Watson singled with two outs to extend the inning. Amis walked, then Gump plated a run with a single. Next, Seth Kerner provided the big hit Post 86 needed, clearing the bases with a double to make it 6-4 Toronto.

“He barreled it up,” Sninchak said of Kerner’s hit. “We knew hitting was going to be one of our strengths. At any given moment, any guy on the team can help us out and Seth did. He stepped up there bigtime.”

Shayne Christian plated a run with a single to make it 6-5 in the top of the sevcnth after Post 573 left a runner on third base in the sixth, but Brilliant was never able to get the tying run across.