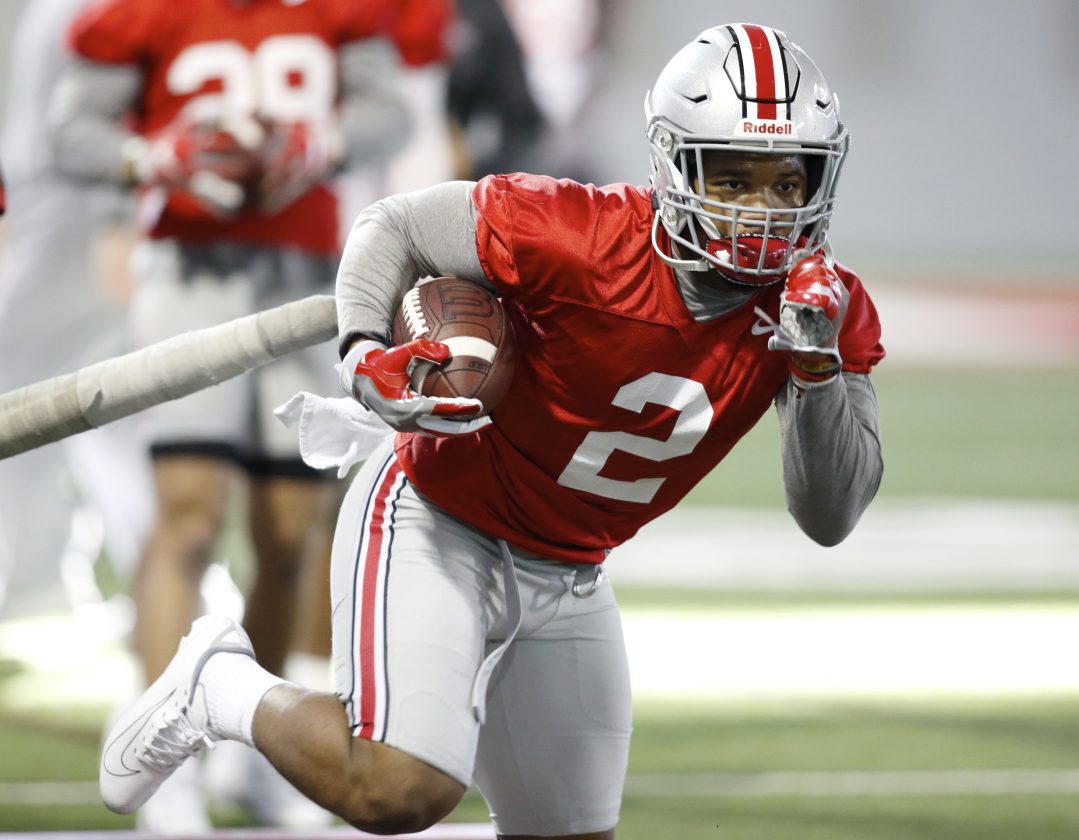 FILE - In this Wednesday, March 6, 2019 file photo, Ohio State running back J.K. Dobbins runs through a drill during an NCAA college football practice in Columbus, Ohio. J.K. Dobbins wants to make up for his “failure” last season. Despite rushing for over 1,000 yards, Dobbins calls 2018 a disappointment. He had a drop-off from his record-breaking freshman year and is determined to get back to that level and prove he’s best running back in the nation.(AP Photo/Paul Vernon, File)

“I didn’t make defenses fear me as I should,” the Ohio State tailback said while vowing to bounce back in 2019.

After he set a freshman school rushing record in 2017 with 1,403 yards, his numbers dropped off last season. Platooning with Mike Weber, Dobbins averaged 4.6 yards per carry, compared with 7.2 per carry the previous year as the passing game behind record-breaking quarterback Dwayne Haskins Jr. took center stage.

After logging six 100-yard rushing games as a freshman, he did it just three times last season and the Buckeyes’ running game failed to find consistency.

“I don’t know if he struggled as much as we could just do a better job of calling (plays) up and putting him in good places and getting the blocking a little better,” offensive coordinator Kevin Wilson said. “To me, running is a group effort, and our group was good, just not as good as it needs to be.”

The pieces are falling into place for a productive year for Dobbins, and his wide smile is the first indication.

“I just feel like I’m the best running back in the nation, and I want to prove that,” the 20-year-old junior said. “I didn’t last year, and I have a chip on my shoulder because I know I can do better.”

He worked out hard in the offseason to reduce his body fat by 4% — it’s now down to 8% — without taking pounds off his 5-foot-10, 217-pound frame. With Weber gone to the NFL, Dobbins will be the featured tailback, and he’s bound to get a ton of carries early as new quarterback Justin Fields figures things out.

With the dual-threat Fields at quarterback, the offense likely will look more like it did in 2017 when J.T. Barrett, always a threat to carry the ball himself, helped open up defenses for Dobbins.

“I want to have that responsibility, the team leaning on me in time of need,” Dobbins said.

Dobbins also has the extra motivation of knowing that a huge season and some Heisman Trophy talk will boost his NFL draft stock if he decides to leave after this season.

New Buckeyes coach Ryan Day is counting on Dobbins. Fields didn’t dazzle in the spring game, so it remains to be seen how long it will take him to find his stride. The offensive line returns just one full-time starter and may take some time to jell.

Ohio State is still looking for one or two backups to emerge. Master Teague, a redshirt freshman, looked like a good option but an injury has kept him out practice. Day said redshirt junior Demario McCall, who has been used as an H-back, and freshmen Marcus Crowley and Steele Chambers are contenders.

Dobbins said he is prepared to carry the load. Another 1,000-yard season would put him good company: Two-time Heisman winner Archie Griffin is the only other Buckeye to top 1,000 yards in three straight seasons.

“I feel,” he said, “like everything is coming together at the right time.”