Another new foe for Steubenville to face 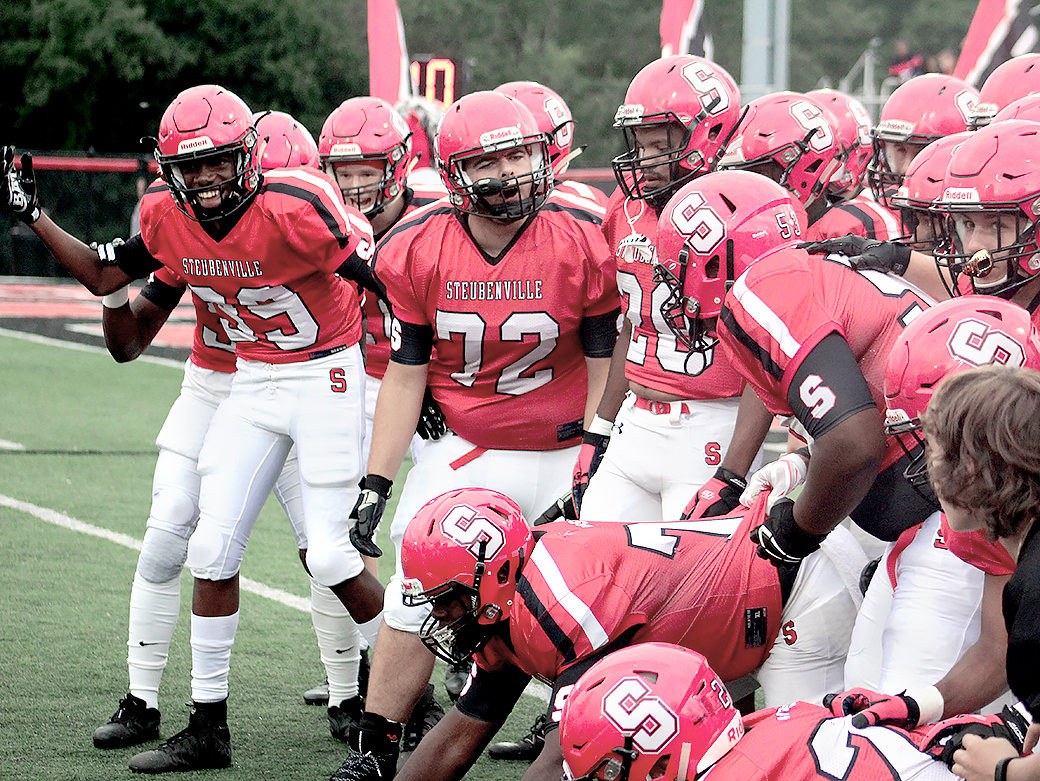 PUMPING UP — The Steubenville football team preps for its one-point victory over H.D. Woodson on Friday. It hosts St. Francis this week. -Joe Catullo

STEUBENVILLE — The St. Francis Red Raiders will bring their high-octane offensive attack to town Friday, meeting Big Red for the first time. The opening kick is set for 7 p.m. inside Harding Stadium.

St. Francis, based in Hamburg, N.Y., launched its season by whipping Erie, Pa., 50-22. The Red Raiders scored touchdowns on their first two plays from scrimmage and then tacked on a two-point conversion pass off of a fake kick.

“This is a very talented team in all areas,” Big Red coach Reno Saccoccia said while watching film of St. Francis. “They have speed, they have size and they have talent everywhere. On top of all that, they are very well coached.”

The Red Raiders, who compete in the Monsignor Martin Athletic Association, are coached by Jerry Smith, who’s in his 32nd season at the St. Francis helm. Big Red has faced several teams from the association in the past, including Buffalo St. Joseph and Cardinal O’Hara.

Junior quarterback Jake Ritts (6-foot-1, 189 pounds) directs the St. Francis attack. In the win at Erie, he threw for 209 yards and five touchdowns. As a sophomore, Ritts broke the St. Francis school and Western New York records for passing yards (3,369) and touchdowns (36).

“Ritts is an excellent quarterback,” Saccoccia said. “He’s a very accurate passer and also is a threat to run.

“St. Francis is primarily a throwing team. They will run from time to time, but they really prefer to throw. When they do run it, however, they run it very well.”

The running game is paced by Xzavier Jancyzlik, a speedy 5-8 senior. Against Erie, he ran for 180 yards and two touchdowns on just six carries. D’Andre Jones, another 5-8 senior, also will see time at tailback. Both tailbacks also can catch the ball coming out of the backfield.

“Their offensive line is solid and very well coached,” Saccoccia said. “This team presents major challenges to us on both sides of the football.

“Offensively, St. Francis brings a different type of skill than Woodson did last week. Woodson had talent and speed. St. Francis has precision on its routes and the ability to catch the football. We have a big test ahead of us.”

A late touchdown run by Tayveon Crawford, a critical extra point by Jared Roberts and David Tuttle’s interception helped Big Red rally for a 27-26 win over Woodson in Week 2.

Big Red’s offense produced 392 yards in the victory (281 on the ground and 111 via the air.) Crawford had another huge night, running for 182 yards and a pair touchdowns. Senior quarterback Randy Mitchell threw for 111 and a score. He also scrambled 55 yards for a six-pointer.

Through two games, Big Red is averaging 470 yards and 35 points. Of the total yards, 366 have been achieved on the ground. Crawford has 380 yards (he’s averaging 6.4 yards a carry) and four rushing touchdowns. Mitchell has passed for 208 yards and two scores.

Mitchell is completing 64 percent of his passes. Stone Biacco has six catches to lead Big Red’s stable of receivers.

The defensive unit is allowing 133 yards per outing and 17 points. As is generally the case, Big Red has been tough against the run, surrendering just 71 yards in two games.

“We’re trying to work on fixing the little things every day,” Saccoccia said. “We pick a couple of things each week and emphasize them. Right now, we’re trying to emphasize self-discipline.

“We’re 2-0 and that’s as good as you can be right now. But, we have a lot of things to work on and I don’t mind that since our guys are willing to work. They want to learn, they want to get better and to me, that’s the starting point. If you want something bad enough — you have to be willing to do whatever it takes to achieve it. It takes a couple of hours daily in the heart to work on things and keep moving forward.”

¯ The four-hour trip to Steubenville is the first of three-consecutive games against Ohio opponents for St. Francis. After the Big Red game, the Red Raiders will host Walsh Jesuit, then Lake Catholic. St. Francis will visit Dover on Oct. 11

¯ St. Francis captured the Monsignor Martin championship in 2018 after overcoming a 2-6 start. The crown was the third for the Red Raiders since 2011.