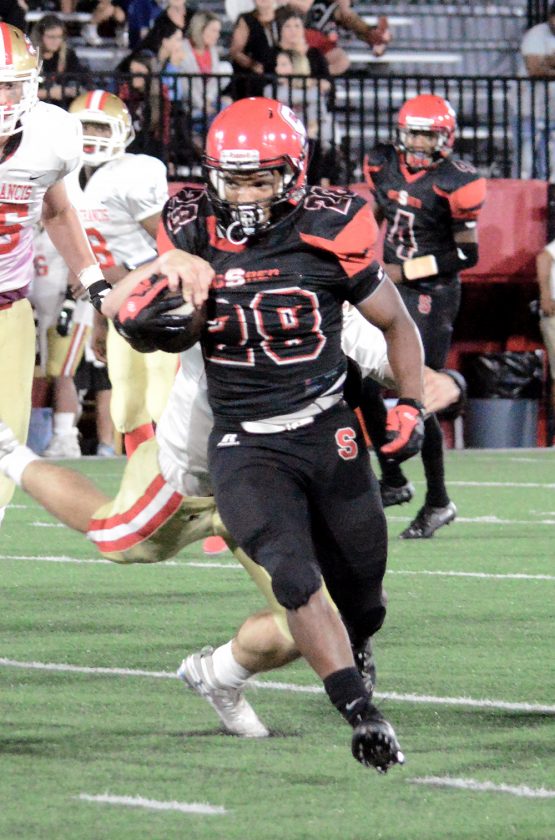 Following Friday’s 43-31 home victory over St. Francis, Hall of Fame coach Reno Saccoccia said his now 3-0 club has achieved good status. It, however, has a way to go before reaching the next level.

“I think we played good defense and we were good on offense but we just are not where we need to be right now to play the teams we have left on our schedule. But, as I have said, the great thing is our kids want to get better and they will keep working hard to get better.”

Big Red was good enough Friday to take a 36-7 lead over the Red Raiders, who hail from near Buffalo, N.Y., early in the third quarter. St. Francis, now 1-1, scored a couple of touchdowns once Saccoccia started to empty his bench to make it 36-23. A 66-yard sprint to the end zone by sophomore Rodney James Jr. put the victory on ice for Steubenville. The score came two snaps after an interception by Randy Mitchell.

“We just made way too many mistakes at the beginning,” said Jerry Smith, who’s in his 32nd season at the St. Francis helm. “We totally gave the game away. When we did, they seized the opportunity and got that late run at the end.

“This was two titans going at it. It was our second game and the third for them. So, they had a little advantage since they already have made their second game mistakes. The second game usually is when you suffer some growing pains. We certainly had those growing pains tonight. Hopefully, we can grow from them going forward.”

The Red Raiders were their own worst enemy at times as they drew 20 flags for 132 yards. Sixteen of the penalties were either illegal motion or offsides. A holding call negated a long touchdown run by Xzavier Jancyzlik. In addition to the interception, St. Francis also lost a fumble (Big Red’s Brandon Kinney recovering). That turnover also led to a Steubenville score.

“We gave it everything we had and we didn’t quit,” Smith said. “We just made way too many mistakes.

“We thought we could come down here and compete and I think we did that. I’m proud of the effort my guys gave tonight.”

Big Red finished with 485 yards of offense (317 coming on the ground). Senior tailback Tayveon Crawford had another strong night, going for 134 yards on 24 trips. He collected 124 of his total during the first half. Crawford had touchdown runs of 1 and 35 yards.

Mitchell, Big Red’s senior quarterback, threw for 168 yards (he completed 11 of his 17 attempts) and two more scores. Mitchell connected with Stone Biacco for a 34-yard touchdown and found Luke Zorne running free in the St. Francis secondary for a 40-yard score.

Biacco, the senior wide receiver, hauled in six Mitchell aerials for 93 yards. On his scoring grab, a St. Francis defender went for the interception but came up short. That allowed Biacco to gallop to the end zone untouched.

“They were good and we were good,” Saccoccia said. “They didn’t quit and we never quit. We had a little lapse in the third quarter but we were able to bounce back.

“For us, it’s just a matter of getting better. We’ll focus on having a great week of practice and continue to work on improving.”

Ritts’ scoring tosses went to Xzavier Janczylik (16 yards), Noah Kunzman (6 yards) and Corsi (9 yards). D’Andre Jones went 13 yards for a touchdown on his only carry of the game.

“He’s the real deal,” Smith said of his quarterback. “He had solid game tonight. He’s a hard worker and he’ll continue to improve.”

Big Red will host New Philadelphia Friday in a Week 4 “meetin of the unbeatens.”

The Quakers rolled past Alliance Marlington 49-22 to stay spotless.

Big Red will honor its 1984 state championship team prior to Friday’s 7 p.m. kick.