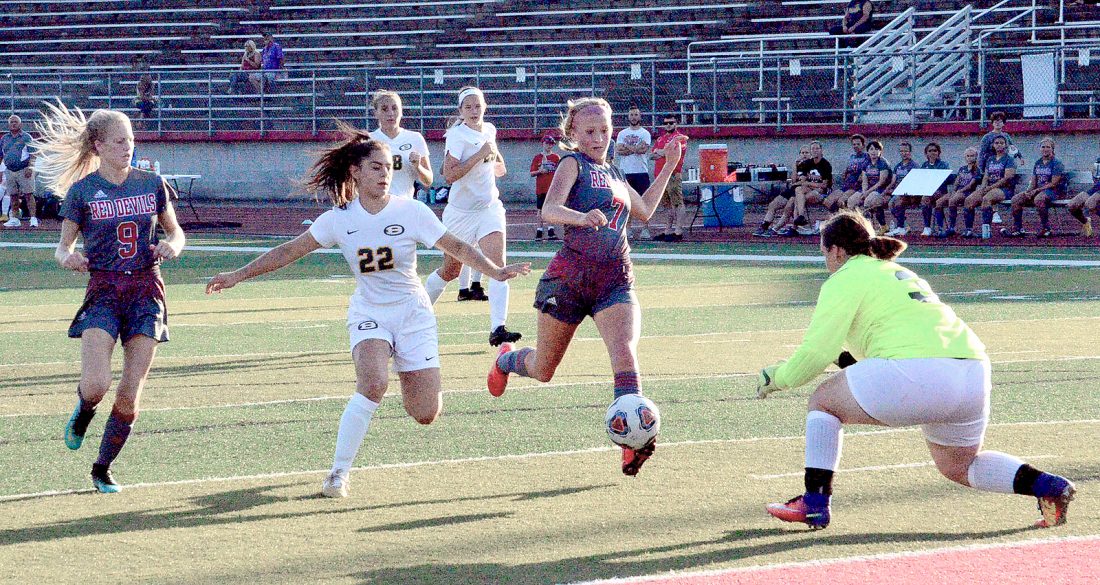 ST. CLAIRSVILLE — On paper, the Brooke vs. St. Clairsville girls soccer match Wednesday night looked to be a one-sided affair.

The Bruins had just one victory, while the Red Devils were unbeaten in seven starts. Someone forgot to remind Brooke of that fact.

The Bruins (1-6-1) continued their red-hot play just 24 hours after claiming win No. 1, as they played to a 1-1 stalemate with the Red Devils (7-0-1) on the artificial pitch inside Red Devil Stadium.

“I’m really proud of the way my girls played against an undefeated St. Clairsville team. I know St. Clairsville is looking good this year, and they have scored a lot of goals,” Brooke head coach Elias Hannaoui said. “We missed a PK (penalty kick), but we came right back and scored to put us up. We hit the post at the end. I’m really happy with the way the girls played today.

“We’re just going to keep on working and get ready for our next game on Saturday. We’ll take a tie against an undefeated team.”

Brooke, which blanked rival Weir 1-0 Tuesday night, had a golden opportunity in the 15th minute when sophomore speedster Brooke Ohler was fouled in the box, resulting in a penalty kick. However, her kick sailed right into the chest of St. Clairsville goalkeeper Jaeda Nowak for the save.

Less than a minute later, Ohler put the Bruins on top 1-0 when she snuck behind the St. Clairsville defense and left-footed the ball past Nowak into the far corner.

The match would remain that way until late in the first half. St. Clairsville, which had a few good scoring chances it couldn’t finish, finally drew even on Mikayla Hendershot’s tally in the 37th minute. Macy Malin recorded the assist.

“We didn’t play well. We didn’t play well for 80 minutes,” a disappointed St. Clairsville head coach Wes Stoner said. “It had nothing to do with them (Brooke). I just told the girls before the game how they beat Weir (Tuesday). Not to take anything away from Brooke. Eli always has them playing well. They are talented kids and young kids. Their record isn’t indicative of how they’ve played.

“We didn’t play well. In fact, we played really bad and it wasn’t really anything they did defensively. We had our chances. We’re shooting straight at the goalie. Crosses are going clear through the box without anyone touching them. I think it (was a lack of) effort tonight. That’s the way it looked.”

Neither team could find the back of the net in the second 40 minutes, but the Bruins nearly won it late, as only a post stood in the way.

“Their goalie was outstanding. She came up with some really big saves for them,” Hannaoui said of Nowak, who recorded two saves on four shots.

He also had high praise for Macy Malin.

“She’s really, really good,” Hannaoui said of Malin, who had scored 27 goals and half-a-dozen hat tricks entering the contest but was held to an assist. “We had a hard time stopping her when she got the ball. We double-teamed her and even sometimes sent three girls at her. We heard she had scored a lot of goals, so we couldn’t let her shoot. I think we had success with that.”

Freshman Hannah Buterbaugh came up with 14 saves for Brooke.