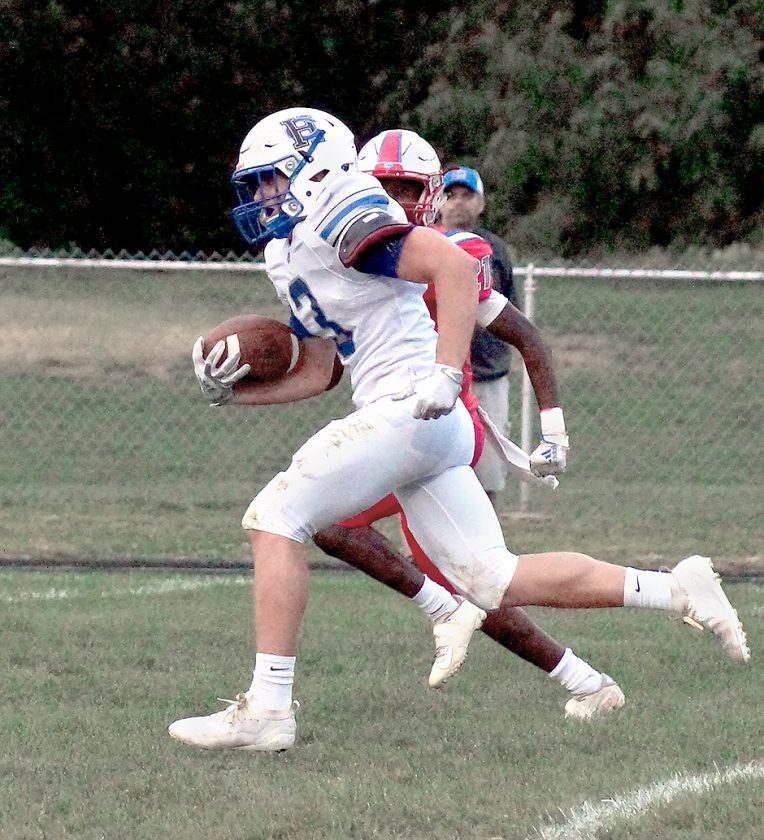 WINTERSVILLE — Something Indian Creek has been waiting for a long time finally happens Friday night — the first game will be played on the new artificial turf surface at Kettlewell Memorial Stadium.

Even with all the excitement, Connor expects his team to be focused on nothing but winning the game when the opening kick occurs at 7 p.m..

“I think once the kids get going, we have a football team that has been around for a while, so we’re going to realize it’s still the game that’s most important on Friday night,” Connor said.

The challenge for the 2-0 Redskins is a tough one, as 2-0 Indian Valley comes to town.

“They have been a very successful program for well over a decade,” Connor said. “They are well coached. They do a lot of things offensively. They are a sound football team. They are going to make us defend the entire field.

“They play a defense we don’t see very often. They play a 3-5 stack. They have five very talented linebackers.”

Connor’s team is in the middle of a tough stretch to start the season.

“We said we would find out who we were in the first five weeks,” he said. “Last week was important because it was an inter-regional game (against East Liverpool), and this one is a big Division IV game. It’s important for us early in the year to see where we’re at as a program.”

WELLSBURG — Mac McLean’s young Bruins finally were able to close out a game last week and put together 48 minutes of football. The result was the program’s first win since 2017, a 45-44 verdict at Hedgesville.

This week, the Bruins look to go above the .500 mark, hosting a young but skilled University team that also is 1-1.

“It was great, especially the fashion in which we did it,” McLean said. “The lead changed hands about three times in the waning minutes of the fourth quarter. Besides the win, it was great to see 48-straight minutes of effort. We were finally able to cap one off and put a game away.

“We’re not satisfied by any means, but it was a much happier Monday in school than it has been lately.”

McLean sees a lot of similarities between his team and University.

“University was able to shock a lot of people and beat John Marshall in the first week,” McLean said. “That opened a lot of eyes because it’s pretty common knowledge that University graduated a very big, talented senior class last year. Watching them on tape, they kind of remind me of our team last year. There’s a lot of youth on the field.

“They’re talented. They’re a young football that is going to try to scrape out some Ws this year and putting in time that’s going to pay dividends down the road.”

With the youth on both sides, the key to victory for the Bruins is execution.

“I told the boys the most dangerous team to us on Friday night is going to be in green and gold,” McLean said. “Earlier in the year when University beat John Marshall, I think John Marshall had five turnovers. John Marshall had more offense, but the scoreboard is what matters. We’ve got to be on our game.”

CADIZ — The Huskies may be 0-2, but head coach Anthony Hayes knows his team can still accomplish a lot in the next eight games.

“We’ve kind of got off to a slow start,” Hayes said. “We’ll get back to the drawing board and get back to work. Our kids scrap. That’s who we are as a community. We don’t mind having our backs to the wall. Either way, we’re going to come out fighting on Friday.”

That starts Friday night when Harrison Central hosts Buckeye 8 opponent Bellaire, who is 1-1 after a loss to Garaway.

“They are extremely well coached,” Hayes said. “They have big, physical kids. They are basically the same team they had last year that went on a playoff run. They have a large senior group. We’re going to have our hands full.”

The question mark surrounding the game is the status of star quarterback Kobe Mitchell, who left Friday’s loss at Toronto at halftime with an injury.

Should he not be able to go, Hayes has confidence in Clayton Nunez.

“We’ve been working Clayton in on and off throughout the offseason in case something happened,” Hayes said. “I thought he did an excellent job coming in. He didn’t blink at all. I couldn’t be prouder of the young man coming into the fire like that.”