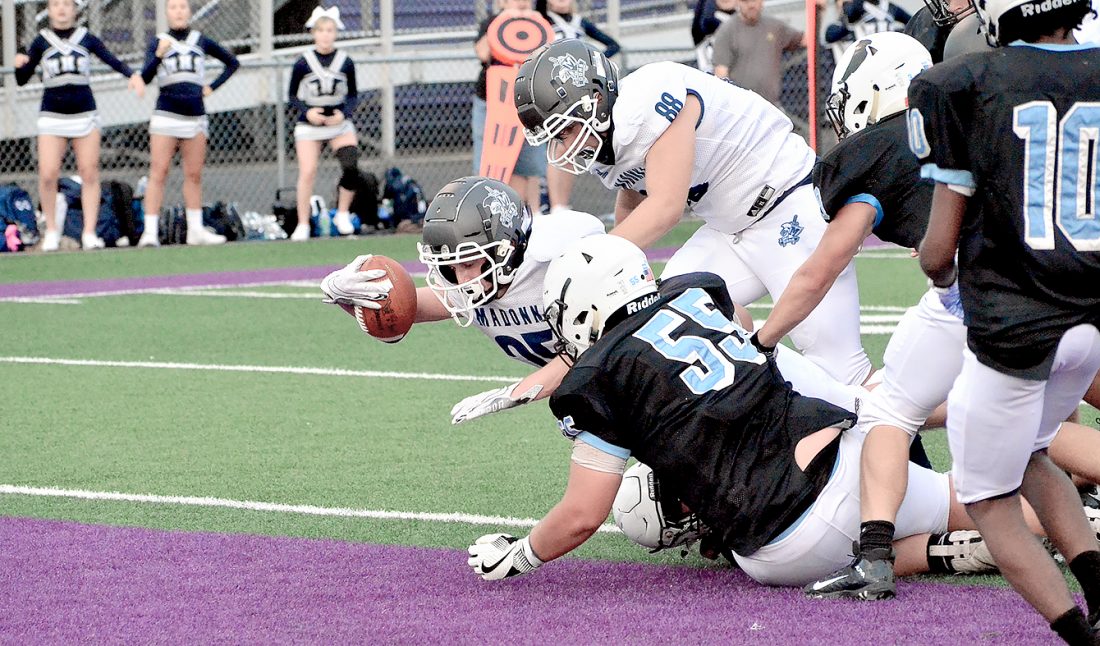 STRETCHING OUT — Madonna’s Roman Baird reaches for a touchdown against Bridgeport on Saturday. The Blue Dons will play their first home game this season against Carrick on Friday. -Kim North

WEIRTON — Fresh off of a season-opening come-from-behind win, Madonna looks to keep the ball rolling Friday at Jimmy Carey Stadium when it hosts winless Carrick from the Pittsburgh area, with a 7 p.m. start.

Last week, the Blue Dons were trailing Bridgeport 12-6 at the half but tied in the third quarter with a long run and scored nine points in the fourth to pull out the 21-18 win.

“We had a lot of adversity in the first 10 minutes of that game,” Madonna coach Darrin Hicks said. “A lot went wrong, but our kids battled back. There was never a moment of doubt for our group. We were extremely positive on the sideline. I thought our seniors did a great job of making sure that we were focused on what we needed to do. We played it one play at a time, and we were fortunate enough to make enough plays at the end to get a victory.”

Like Madonna, Carrick first-year coach Brian Nolte has lower numbers than he would like. He started the season with 28 players. Nolte has taken on the task of turning around a team that has a record of 3-29 during the last three years. Because of injuries, the Raiders, who this year play an independent schedule, played only five of the seven scheduled games and were outscored 243-14.

He told the Pittsburgh Post-Gazette that he implemented some flexibility training with a goal of more holistic strength for his players that will result in better health throughout the season.

The Raiders already have two games under their belts, both losses. Bishop Carroll shut them out, 41-0, on Aug. 23, and Albert Gallatin beat them, 41-20, last week.

Senior lineman Cody Rump (6-foot-2, 270 pounds) is being leaned on to provide stability up front. The Raiders also have DaShawn Stephens (6-1, 210) on the line. E. J. Williams, a transfer from Northgate High in Pittsburgh, has bolstered the Raiders at the skill positions.

As usual, Hicks and Nolte have exchanged films of their games.

“They operate out of a spread offense,” Hicks said. “They have a lot of speed and like to go deep with passes when they can. Their quarterback shows the ability to scramble when receivers aren’t open and can hurt you that way, too.”

Hicks said the Raiders also run option plays out of a two-back set and are multiple that way.

Defensively, Carrick plays mostly man on the wide receivers and bring six or seven with a high pressure rush in an effort to disrupt the offensive rhythm.

Hicks was pleased with sophomore quarterback Santino Arlia at Bridgeport. He now is the full-time starter after getting his feet wet last year in a kind of designated passer role.

Arlia scrambled out of trouble late in the third quarter to spearhead the Madonna comeback against Bridgeport. He found daylight and took off down the sideline for the touchdown that tied the game at 12-12.

Arlia’s big night saw him rack up 301 total yards, including 211 yards passing and 90 rushing. Nine of Arlia’s 16 receptions were to Thomas Sessi, who finished the game with 86 yards and a touchdown. Sessi was the leading receiver in the area last year as a sophomore and already is ahead of every other receiver in the 11-school coverage area of the Herald-Star and The Daily Times.

“Santino struggled in the beginning similar to what was happening with the rest of the team early in the game,” Hick said. “He put it behind him, which I was very happy to see. Sometimes you don’t get that with a young quarterback, but he had a short memory, which is nice. I thought he had a pretty good ballgame after he settled down.”

Hicks said he feels it is important that he is transparent with his players, particularly the younger ones in that he talks to them about things that can potentially go wrong.

“You need to talk about it so they are aware of it,” he said. “You can’t hide from it. We talk about the first time anything like that happens. Sometimes the shell shock is that they are not able to come back. But, if you are fully prepared and open with it and you talk about it, you say, ‘Hey, we’re going to be OK.’ Sometimes there can be panic, but there was zero panic Saturday night from that early adversity.”

Hicks added that one of the things his club is working on this week in practice is shoring up the special teams.

“We got a little better in that area as the game progressed, but it is an area that we have to work on all the time,” he said. “The other things we need to do to win are constant, too, things like creating turnovers and protecting the football.

“With Carrick’s speed and aggressiveness, we also have to get the ball out quickly to our playmakers on the outside, but most of all we just need to play our game.”