Mike Voltz was ‘all in’ for Indian Creek 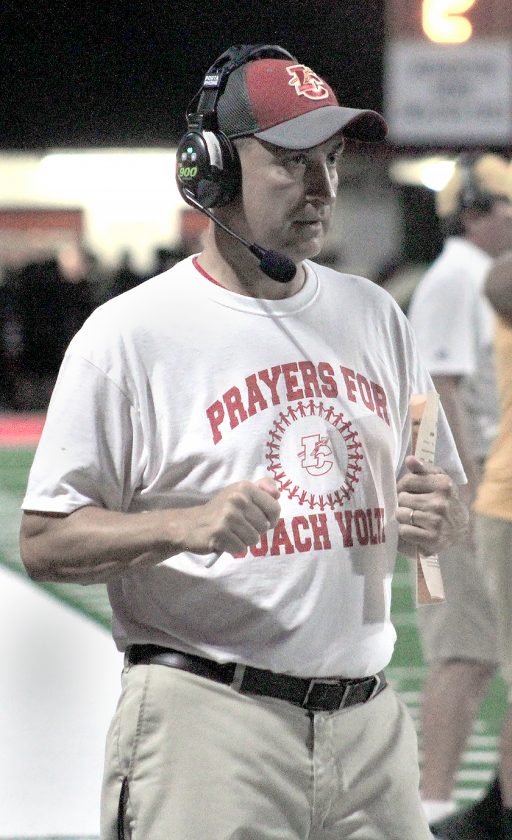 Joe Dunlevy and Andrew Connor used the same phrase to describe Mike Voltz — all in.

Voltz, a father of two and a staple on Connor’s Indian Creek football staff for the last 12 years, died hours before Friday’s win over Buckeye Local. He was 43.

“I just think the guy was all in with how he cared about our kids and cared about our coaching staff and cared about our program,” Dunlevy said. “He was a special guy. He did a lot of the little things that coaches notice that not everyone does. He was just always there to help, even to help the athletic department in general. I don’t know how many times he said, ‘Coach D, you need anything? Is there anything I can do to help?’ Not everyone does that, but that guy did.

Voltz was a 1994 graduate of Toronto and played football for the Red Knights, but was just as much of a Redskin as anything else.

“I know he was from Toronto, and he was a Red Knight, but man-oh-man he was all in here,” Dunlevy said. “The kids loved him, and he loved us all back. He was a Creeker, he was definitely an Indian Creek guy. He was a great guy. I can’t say anything but good things about him.

“He was the perfect assistant coach. What you want, even above their knowledge of football and their work ethic, is their loyalty — and there was nobody that was more loyal to Andrew and this program than Mike.”

He coached with Connor going back to when they were assistants at Harrison Central, after playing football for and graduating from Bethany College.

He and Connor also taught at the Jefferson County Joint Vocational School.

It is the bond that they shared Dunlevy pointed to as the reason Indian Creek became such a big part of his life for more than a decade.

“I really think that a lot of it had to do with his working with and friendship with Andrew,” Dunlevy said. “He and Andrew were really close and would do anything for each other. Andrew is our leader here as our head coach, and Mike was all in with him here.”

Connor will remember the things Voltz did for the players at Indian Creek.

“I think the greatest thing he gave us was he had a big heart,” Connor said. “He loved the kids, he loved being a part of the program. He was all in. We talk about giving yourself, and he did. He just had a certain way with his personality and the way he did things to make the kids feel special. He took it as a privilege to be a part of these kids’ lives, and they thought the world of him.”

Connor was proud of the way his team handled such a difficult situation — and has an idea of where they learned it.

“It was difficult to go through the process on Friday, trying to grieve and prepare for a football game, and I thought our kids handled it remarkably in a very mature manner,” he said.

“I think they learned from him what it takes to have the character to take on that type of challenge. It was really tough on the kids, the coaches and myself.

“You never think you’re going to go through anything like that, and it reminds you that football is important, but in no way does it measure up to life. This was a big life changing event for us.”

The Indian Creek community has received an outpouring of support, including from Friday’s opponent, Buckeye Local.

“I really think this area is special,” Dunlevy said. “The administration, Sam Jones the athletic director and the guys down at Buckeye Local have always been one of the first ones to step up and help our community, and hopefully they feel the same way about us. Like everybody says, we fight like crazy when we are playing to win the game, but once it’s over, we come together. Buckeye Local’s coaching staff, their administration, their players, their band and their fans couldn’t have been more gracious to us than they were — and always are.”

“It’s been overwhelming and heartfelt. It reminds me of why it’s so important to live in the Ohio Valley,” Connor said.

“I think whenever there is any type of situation, challenge or terrible event, these communities rally around each other. They really helped us. It is helpful to know there are so many people out there praying and thinking of you when you’re grieving.”

Following the game Friday night, the players came together at midfield to pray, a touching moment that will not soon be forgotten.