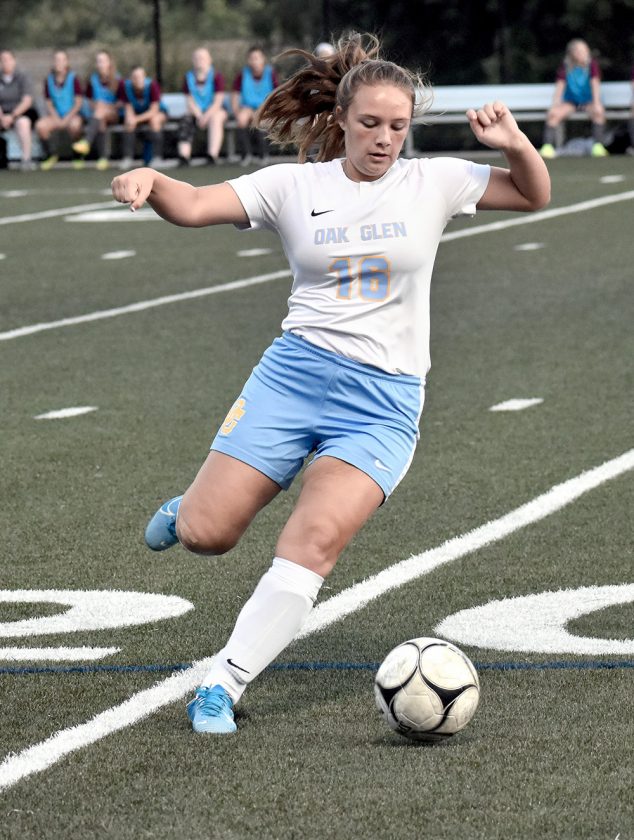 LINING IT UP — Oak Glen’s Madison McKay lines up to send the ball up the field during Monday’s match at Wheeling Central. - Josh Strope

WHEELING — After getting its first taste of Beckley last season, Oak Glen has state tournament aspirations.

With a tandem such as Brooklyn Loveland and Reece Enochs, they have the offensive firepower to get back there.

The duo was on point Monday at the 16th Street Sports Complex.

“They have played together since they were young and same grade, so it is going on now for three years,” Oak Glen coach Ryan Wells said. “It is something we really look forward to. They feed off each other and both are really unselfish and understand their roles.

“Brooklyn could be up top for us, running striker and score 25-plus goals if she wanted to as well, but she buys into her position, being unselfish and usually leads our team in assists.”

Against a rebuilding Wheeling Central squad, Oak Glen put the pressure on from the outset.

The Maroon Knights (0-6-1), playing with a goalie making her first start, did all they could to hold off Oak Glen’s potent offense, but the Golden Bears (6-1-1) were eventually going to break through.

It happened in the 17th minute as Loveland sent a perfect cross that found Enochs, who flipped it past Wheeling Central goalie Molly Brown.

The two hooked up on a corner kick 15 minutes later to double the lead.

Jori Alexander scored on an assist from Jules Virden in the 34th minute to take a 3-0 lead into halftime.

“We threw a new formation out there in the second half that we really like for teams that pack it in,” Wells said. “We talked about it and repped it a little bit in practice. I think it opened things up a little bit. You can always work on something

“We worked on second touches and finishing in the second half. We did that a little bit better.”

Despite leading 3-0, it could have been much worse. Wheeling Central was on its heels the entire first half. Brown made 10 saves in the first half and that is not counting the shots that went wide or over the net.

Enochs scored less than two minutes into the second half on an assist from Alexander.

A little more than a minute later, she added another, the third coming off a cross from Loveland. She scored her final goal in the 50th minute, stealing the ball from a Maroon Knights defender and scoring on a breakaway.

Madison McKay, Alexander and Virden had the other goals in the second half for Oak Glen.

Wheeling Central managed four shots on goal, with Loveland making the saves. She subbed in for starter Alexa Andrews, who didn’t see a shot or even touch the ball.

“For us, this is a rebuilding year, and we did a lot of things well for us,” Wheeling Central coach Julie Barack said. “Our defense is pretty solid, but when you get hammered for 80 minutes, stuff like that happens. Oak Glen is a phenomenal team and have been for years.

“At the end of the day, we still have good attitudes. We are trying to find the positives. We had some good passes, some looking up and going the right direction. Little things that add up for us as far as wins. We knew that coming in. We are looking at what we are improving in as a team and not so much the score.

“We are getting better at listening to each other and passing the ball, learning the positions. I have a lot of girls that have never played so it is more about getting comfortable with the game itself. Our veteran players are doing a good job of helping them through.”