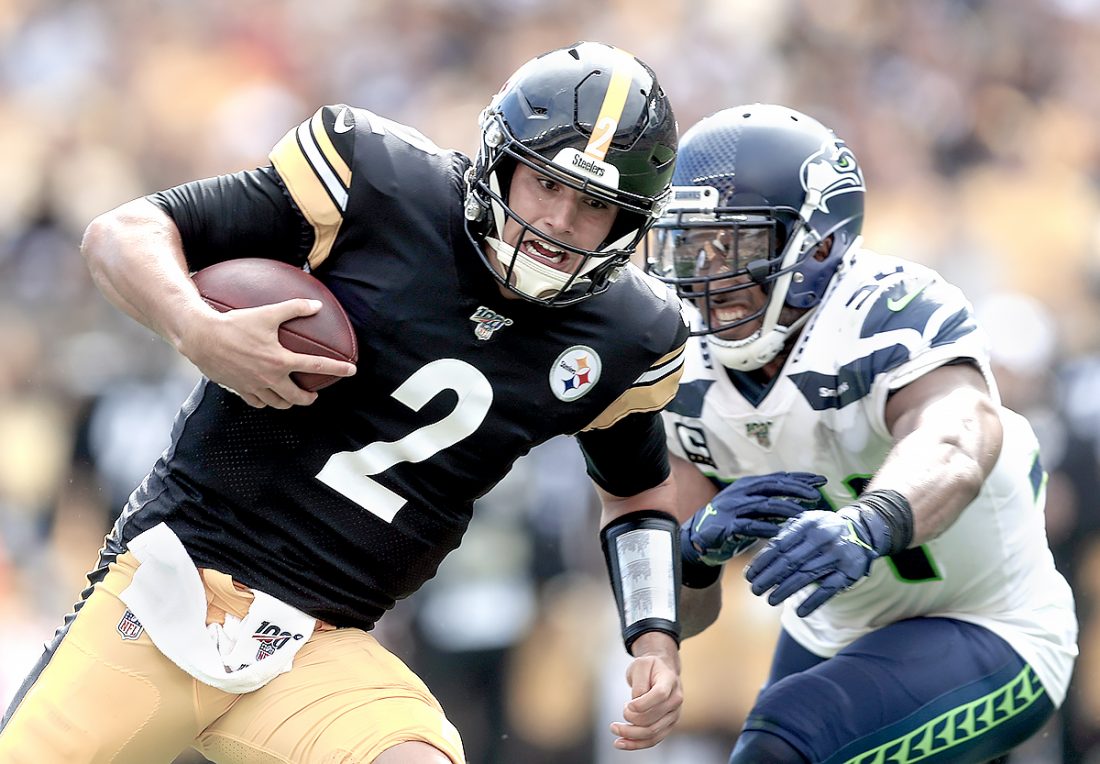 Pittsburgh Steelers quarterback Mason Rudolph (2) scrambles past Seattle Seahawks middle linebacker Bobby Wagner (54) for a first down in the second half of an NFL football game, Sunday, Sept. 15, 2019, in Pittsburgh. The Seahawks defeated the Steelers 28-26. (AP Photo/Don Wright)

PITTSBURGH — Ben Roethlisberger shook his right arm once. Then twice. And just like that, the Pittsburgh Steelers found their season at a crossroads just two weeks in.

While Mason Rudolph filled in capably in the second half after Roethlisberger left with an unspecified right elbow injury in a 28-26 loss to Seattle on Sunday, the Steelers find themselves at 0-2 for just the second time in Mike Tomlin’s 13-year tenure. They’re also facing the prospect of trying to move forward without their captain and the only player in the locker room with multiple Super Bowl rings.

Tomlin offered no details on the nature of the 37-year-old Roethlisberger’s injury. Roethlisberger grimaced after throwing a pair of passes on a drive late in the second quarter. Though he was under duress several times during the first half, he didn’t appear to be touched on the plays that left him clutching the elbow.

Tight end Vance McDonald said the starting offense was told Roethlisberger was hurt just before heading out for the second half. McDonald called the news “a shock” but praised Rudolph’s play after the backup completed 12 of 19 passes for 112 yards and a pair of touchdowns to McDonald while taking the first regular-season snaps of his young career.

“I think he’s come a long way since last year,” said McDonald of Rudolph, taken in the third round of the 2018 draft. “So, yeah, if he’s our guy, he’s our guy and we’re going to move forward with him.”

Rudolph, who won the backup job over Josh Dobbs following a solid training camp, wears his helmet on the sideline at all times as a way of keeping himself ready to come in. He suddenly found himself pulling it down over his chin and running onto the field when Roethlisberger walked onto the field in the second half sporting a baseball cap.

“I thought I was ready,” Rudolph said. “I had a really good feel for our game plan and what we worked on all week. … I didn’t feel like I was unprepared by any means.”

The early returns were iffy. Rudolph’s first pass fell incomplete and his second was intercepted by Seattle safety Bradley McDougald when Steelers wide receiver Donte Moncrief let the ball go through his hands and smack off his facemask. McDougald made a diving grab of the carom while sliding to the sideline and the Seahawks took the lead for good six plays later.

Rudolph hardly appeared shaken. A 45-yard heave to JuJu Smith-Schuster led to a field goal on Pittsburgh’s ensuing drive and Rudolph hit McDonald for scores twice in the fourth quarter while trying to keep pace with Seattle’s Russell Wilson. Rudolph ultimately ran out of time. With Roethlisberger’s status uncertain, Pittsburgh’s ability to dig itself out of an early hole could rely heavily on how rapidly the 24-year-old Rudolph develops.

It’s a job Rudolph is ready to tackle if necessary.

“I am completely confident in myself, being a leader on the team and playing games,” Rudolph said. “That’s what it all comes down to. If (Roethlisberger is out a while), I’m ready to roll.”

That confidence is one of the reasons the Steelers took Rudolph with the 76th overall pick in the 2018 draft. General manager Kevin Colbert called the move a no brainer, partly because the team had a first-round grade on Rudolph following a record-setting career at Oklahoma State. Rudolph spent last season as the third-stringer behind Roethlisberger and Dobbs but took a step forward during training camp in which he showed an ability to make plays downfield while also taking care of the ball.

The Steelers will need him to do both if it wants to stay afloat. Pittsburgh travels to unbeaten San Francisco (2-0) next Sunday. The Steelers have struggled at times on the West Coast in recent years and haven’t beaten the 49ers on the road since 1999.

Rudolph’s poise and his energy — he pumped his arms in glee after connecting with McDonald for an 8-yard score for first career touchdown pass — could help Pittsburgh emerge from an early funk. While Roethlisberger won the NFL passing title last season, his 16th season is off to a slow start. Roethlisberger failed to get Pittsburgh in the end zone during a blowout loss to New England last week and was just 8 of 15 for 75 yards against Seattle before exiting. He spent a portion of the second half talking to Rudolph and offensive coordinator Randy Fichtner, providing insight and guidance.

Calling Rudolph the heir apparent is premature. The club signed Roethlisberger to an extension in the offseason that runs through 2021, the same year Rudolph’s rookie deal expires.

For the second half on Sunday — and perhaps for the immediate future — Rudolph became a part of Pittsburgh’s uncertain present. His teammates are eager to see where he goes from here.

“I’m not really more nervous because he’s behind a quarterback that’s a Hall of Fame quarterback,” defensive end Stephon Tuitt said. “At the end of the day, we trust him just as much as we trust Ben.”