Anything is possible for Madonna, as long as it believes 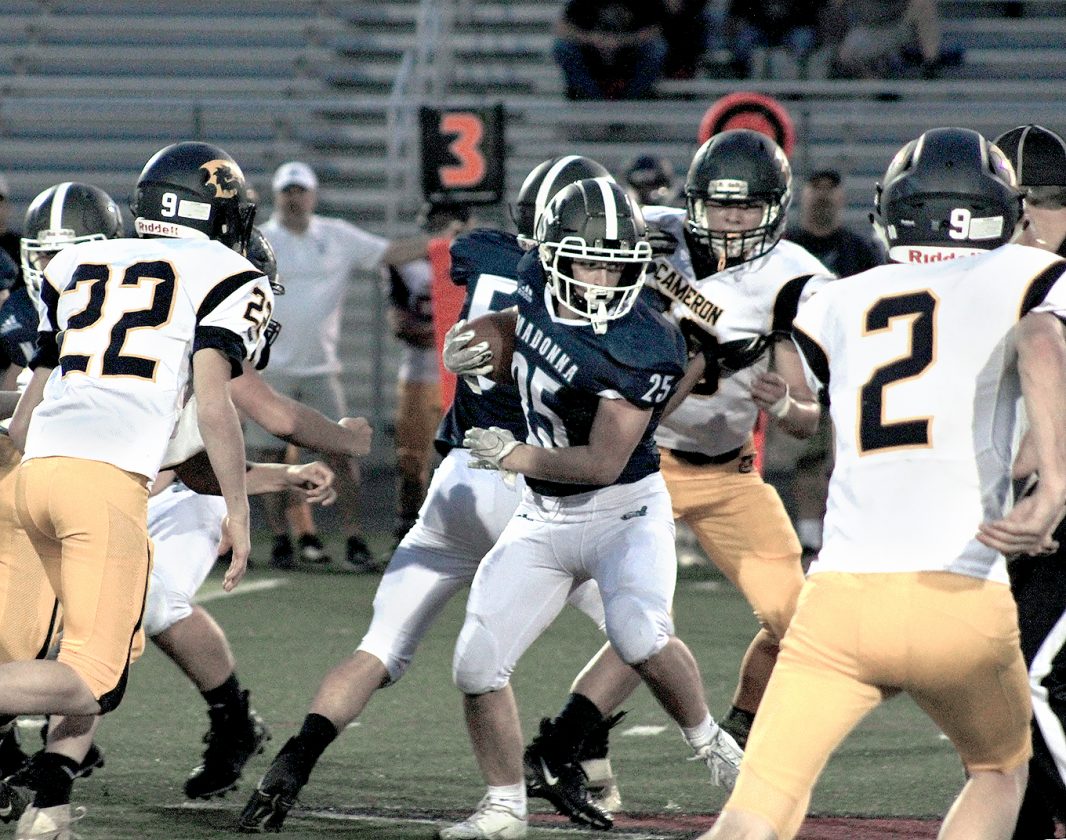 WEIRTON — The Madonna Blue Dons are on a roll for the first time in several years, having won five of six games and the last three in a row.

The goal, according to fourth-year head coach Darrin Hicks, is to keep it going Friday at Beallsville. The opening kick is scheduled for 7 p.m.

With that 5-1 record comes status among the better teams in West Virginia Class A. With the win over Trinity Christian last week, the Blue Dons moved into the top 10 at No. 9.

“I imagine the kids are excited about that, but this bunch has tended to keep it’s focus on being 1-0 each week,” said Hicks, whose club will be playing the second of three-straight road games. “That is what coach Billiard (Paul ‘Bud’ Billiard, highly successful former coach at Brooke) would say.

“That’s kind of a hallmark of our program. We just want to be 1-0 one more time. We don’t look back, and we don’t look to far into the future. We’re simply focused on Beallsville and taking care of business against a good football team.”

The Blue Devils go into the game having won two of their six games, which is one more win than a year ago. That’s a plus for first-year coach Rusty Lucas, who moved up to the head job after being an assistant. Like Hicks, Lucas is focused on winning the next game.

“Every time we step on the field, I expect to win even if we are playing Steubenville,” he said in the preseason preview. “That is just the way I am.”

Lucas has just 15 players this year, but Hicks sees some good skill players and a solid line in the scouting report.

“Beallsville has some talented kids, and they are very multiple on offense,” Hicks said. They go from being an unbalanced power running team to being a spread team. They play a couple of different quarterbacks and an athlete (Dakota Phillips) that plays quarterback, running back and receiver. They move him around.”

Lucas has the Blue Devils using a lot of the old school unbalanced line, with double team blocking and power running.

“They use a lot of old-school principles in a new-school fashion,” Hicks said about Beallsville. “And, they do it well. That could give our defense some problems. I’m not sure I’ve ever seen anything quite like what they are doing.

“On defense, they have some size up front and play a lot of man coverage in the secondary. They want to bring pressure at us, and they are pretty good with their special teams. With the talented athletes they have, they can be hard to figure out.”

That could be a test for sophomore quarterback Santino Arlia, who now leads the Herald-Star/Daily Times passing statistics. His big game last week in the 32-6 win over Trinity (25-40-326-3) pushed him ahead of Oak Glen’s Nick Chaney by about 100 yards.

Arlia’s favorite receiver, Brennan Secrist, also is tops among wideouts. He has 31 catches for 332 yards and six touchdowns. Madonna junior Thomas Sessi, who led all area receivers a year ago, is third with 24 catches and 254 yards.

With teams now trying to double cover both of those guys, the late addition of Lucky Pulice has been a key in the Blue Don winning streak. Pulice caught all three of Arlia’s touchdown passes last week and had eight catches in all for 91 yards.

“Our keys are the same each week,” Hicks said. “We have to play great defense, create turnovers and limit ours, play great special teams and be able to score when we get in the red zone. We talk about those four principles every week. They are really the hallmark and backbone of what we are trying to get accomplish each week.

“We have some players that are on top with the statistics you guys keep in the paper, but we have an unselfish group of skill players. They do a really good job of taking care of each other. There is no animosity or anything like that. You see a lot of times where guys are lead guys and really want the ball. We don’t have any of that.

“Our guys are happy for each other. They’re pulling for each other. Whoever is the guy that gets the most touches you can see the other guys out there blocking for him doing whatever it takes. That’s a hallmark of a good team, and I’m very pleased with that.”