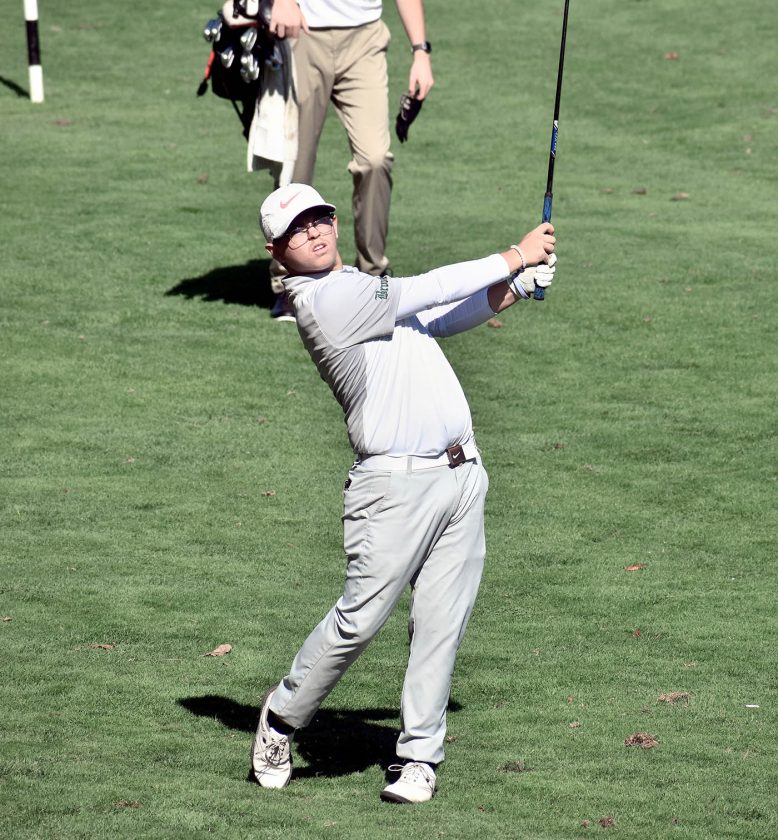 FOLLOWING THROUGH — Brooke’s Ryan Bilby follows through on his swing on the 11th hole during Wednesday’s state tournament in Wheeling. - Cody Tomer

WHEELING — Since Ryan Bilby came on the scene as a freshman three years ago, it wasn’t a question of “if” but a matter of “when” he would be a state champion.

The Brooke junior put that question to rest on Wednesday as he separated himself from the competition on his way to winning his first Class AAA State Championship at Oglebay’s Jones Course.

Bilby earned top honors with a card of 145 — 10 shots better than the runner-up — during the two-day event, a moment he has been dreaming about for a long time.

“This is awesome,” Bilby said. “This means so much to me and for my school. I was playing with kids I am good friends with. It was just awesome.”

It was clear to Brooke coach Ron Ujcich three years ago that Bilby was destined for greatness. He was right.

“We knew back then it was possible at some point in his career that this was going to happen,” Ujcich said. “To have it happen now, we’ll take it.

“To go through this experience with him (Wednesday) was outstanding. (Park coach) Don Headley said to me before the day started ‘just enjoy it and have fun with it’ and he was right. We enjoyed every minute of it. It was a blast to be around him and talk strategy on the course.

“I talked him down a couple of times like on 14 when he wanted to go for it in two shots. I was like ‘listen, they are chasing you, you aren’t chasing anyone.’ And he still almost birdied.”

Those talks and words of wisdom from his coach also meant a lot to Bilby.

“Him being there all day on both days was really cool,” Bilby said.

Bilby birdied 2, 9 and capped his unforgettable performance with a birdie on 18 in front of the clubhouse and a mob of cheering fans.

“To finish like he did with that birdie was a joy,” Ujcich said. “Congrats to him. It’s just wonderful.”

Bilby didn’t make his trek around the course alone as his friends and classmates gathered at each hole to follow and support him through his march toward history.

“I loved that,” Bilby said. “It was so cool that they came down and supported me like that. It was a really fun time.”

He entered the day with a 2-shot upperhand over Washington’s Ethan Hardy and a three-shot advantage on Wheeling Park’s Noah Seivertson.

Following a 74 in his opening round, Bilby shot an even-par on Day 2 to capture the crown.

“I hit the ball great,” Bilby said. “I may have missed two greens all day and I missed the fairway once. I just hit the ball.”

Also taking in every shot along the way — not only during the state tournament but every match for his first three high school seasons — were his parents, Glenn and Christy.

“They are always there,” Ryan said. “It’s pretty sweet to always have them here.”