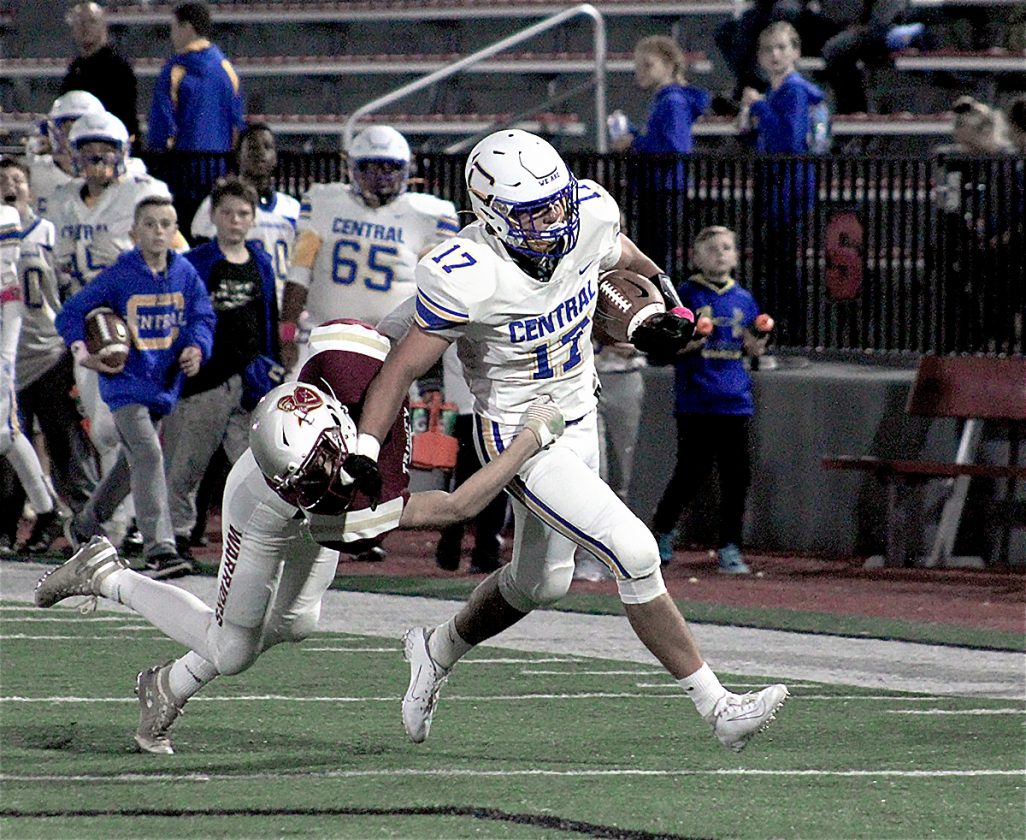 With the win, Anthony Agresta’s Crusaders improve to 4-4 and keep their Division VII, Region 25 playoff hopes alive. The Warriors, fielding a varsity football team for the first time since 2014, fall to 2-5.

Anthony Sprochi brought Central’s fans to their feet early when he returned the opening kick 99 yards, traveling from his own end zone to the Trinity 1. A snap later, Jeffrey Dawson plowed in for the touchdown.

Following an interception by Anthony LeFever on the first Warrior possession, Dawson scored again, this time on a 7-yard run. After its defense forced a three-and-out, Central would get its third touchdown, this time on a 52-yard Dawson jaunt. Jack Rook’s conversion kick made it 20-0 with 6:23 left in the opening period.

“Any time you run an opening kick back like that, it kind of sets the tone,” Agresta said. “It was good that our special teams made that play tonight to get us going.

“It was good to get this win. I was honest all week long that the loss to Harrison Central still stings — we really think we let that one get away from us. So, it was a lot to get the kids refocused for another game.”

Central’s fourth touchdown of the opening quarter came on a 2-yard Jayden Keeder run. It capped a 41-yard drive that was highlighted by Cole Maragos’ 25-yard gain on an inside handoff. The score moved to 34-0 midway through the second when LeFever, starting at quarterback in place of the injured Ryan Gorman, motored 68 yards on an option play.

Jack Rook split the uprights with a 25-yard third quarter field goal to account for Central’s final points. The entire second half was played with a running clock.

The Crusader ground game racked up 343 yards on 33 carries. Dawson finished with 130 on just eight touches. His first three totes resulted in touchdowns. LeFever turned his three attempts into 110 yards, while Keeder added 73 on 13 trips.

“With Gorman out, our offense had to get comfortable with a new quarterback, timing, cadence, mesh points in the running game and syncing up the passing game with the receivers,” Agresta said. “That was a lot to focus on during the week. I thought LeFever did a great job of helping lead the team to victory tonight.

“We did some things not necessarily different from our normal offense, but a little more tailored to the skill sets of a couple of our Anthonys (LeFever and Sprochi). I thought the little adjustments we did make were good. Look, I was really proud of the way we started and also proud of how our kids handled things in the second half. I was just as proud about that as I was about the win.”

LeFever completed one of his two passing attempts, while freshman Andrew Dorsey got his first completion of the season.

Trinity, which was playing its first road game of the season, got on the board thanks to a 15-yard run by freshman quarterback Davon Eldridge. The Warriors ran for 173 yards, most of which came after Agresta began clearing his bench.

“The one thing we talked about coming in here was I wanted our guys to compete and have composure,” Trinity coach Marcus Law said. “I thought they did both. If we can build on that, we can get this program going in the right direction.

“It’s definitely been a learning curve. When we started, we had zero football IQ. We’ve had to do a lot of teaching. Tonight, our kids made the right strides in the right directions. They are now taking stuff they learn in practice and bringing it into games. That’s a good thing to see.”

Central: Will be looking for its first road win of the season Saturday when it travels across the river to face Madonna. The kick for the annual rivalry game is set for noon.

“The win tonight gave us an opportunity to think about the postseason,” Agresta said. “We just told our kids if we can’t win a game on the road, then we don’t deserve to get it. We have an opportunity to do that next Saturday.”