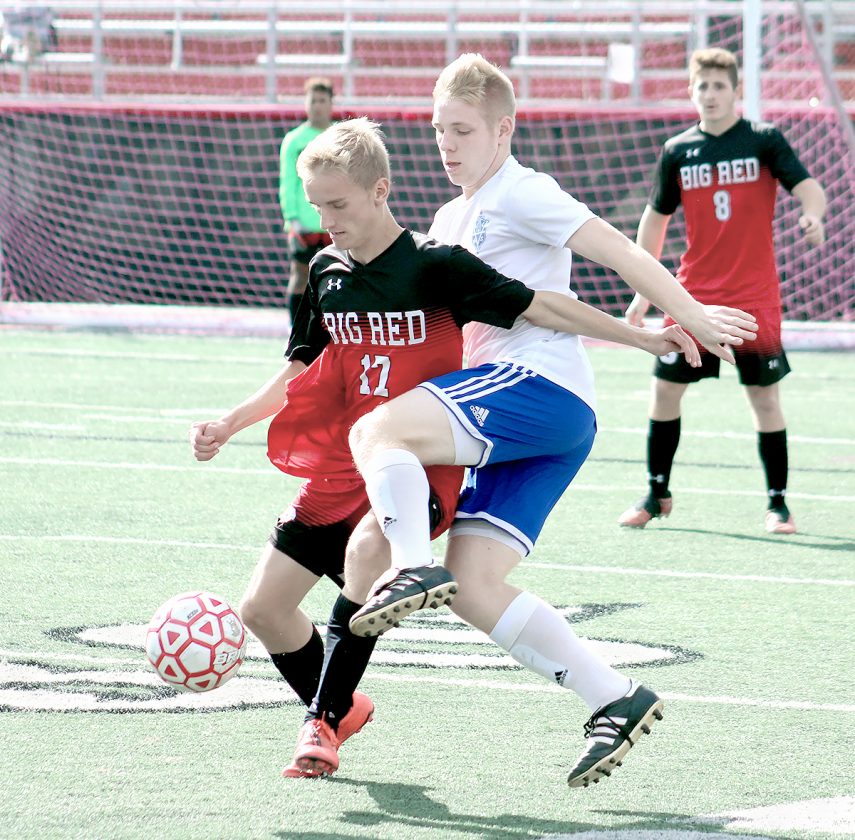 STEUBENVILLE — The ball did not bounce Big Red’s way.

All it takes is one in soccer, and the No. 10 seed East Liverpool boys team scored a goal on a free kick in the first half and held on to shut out No. 9 Big Red, 1-0, in a Division II Eastern District sectional final Saturday afternoon on Reno Field inside Harding Stadium.

“We dominated the game,” Big Red (7-10) head coach Greg Bowers said. “We played good soccer. We moved the ball. We executed what we wanted to execute. We played as hard as we could. Sometimes, that is the game of soccer.”

The Potters scored their goal with 3:45 left to play in the first half.

“It only takes one in soccer,” East Liverpool (11-3-2) head coach Zack Kinsey said. “I knew it was going to be a tough game coming down here and beating Steubenville in a win or go home game. Hats off to Steubenville. They did a nice job defensively. All it takes is one. The ball bounced our way.

“We played with a lot of heart. I have been preaching defense the last couple of games. We have played good defense, and we keep getting shutouts. Cole Dailey did a great job in goal, and so did the guys we have on defense.”

With the win, East Liverpool will play No. 8 seed Beaver Local in the district semifinals at 6 p.m. Wednesday at a site to be announced.

“This means a lot to pour program,” Kinsey said. “We have not won a sectional title since 2015. We have got a great group of guys. We have a lot of seniors. They are hungry, and they play with a lot of passion.

“We have built a family. Building a family is what it is all about. The key to our success has been us building a family. We have a brotherhood on the team. They pick each other up. When someone gets down, they pick them up. They don’t belittle them. It is exciting. These guys find it in themselves to keep going.”

Beaver Local advanced to the game thanks to a 2-1 victory over No. 13 seed Carrollton Saturday at home.

Ayden Payne produced the lone goal of the game on a free kick from 40 yards out, and the Potters were able to hold onto the lead for the final 43:45 of play.

“He hit it,” Bowers said. “We knew not to foul. They look to score on those opportunities, and it cost us.

“I could not be more proud of the effort they gave today and all season. The seniors did a great job. Due to the teams we have had in the past, they have had to wait it out to get their opportunity to get on the field. They stuck it out. That says a lot about them. We had a great season.”

Payne’s shot came from the far side of the field, and sailed over the head of JP Walsh in goal.

Walsh made five saves in goal for Big Red, while Dailey made eight saves for the Potters.

“They played their normal kick ball,” Bowers said. “We moved the ball. We were just unlucky. We possessed the ball in their end for 70 percent of the game. We limited their shots. We created opportunities. (Alex) Barnhouse and Scotty (Mitchell) did a good job bringing the ball up from the back. We created some dangerous opportunities. We just could not get one in.”

Trailing 1-0 in the second half, Big Red had a pair of golden opportunities to score, hbut the first shot hit the crossbar. Later, the team’s next shot hit off both posts before being cleared off of the line.

“They moved personnel around at the start of the game,” Kinsey said. “They had some players who played up front the first time were positioned in the back today. They played from the back up.

The game was the final one for Big Red’s five seniors — Noah Reinacher, Levani Balakos, Jacob Lane, Mitchell and Barnhouse.

“We saw growth from all of our players this season,” Bowers said. “We are in a good position for next year. We are going to be able to move guys into those spots. We are doing things the right way and, hopefully, it will pay off for us in the future.”

East Liverpool shut out No. 16 seed Maysville, 4-0, in a sectional semifinal Wednesday night up at Patterson Field.