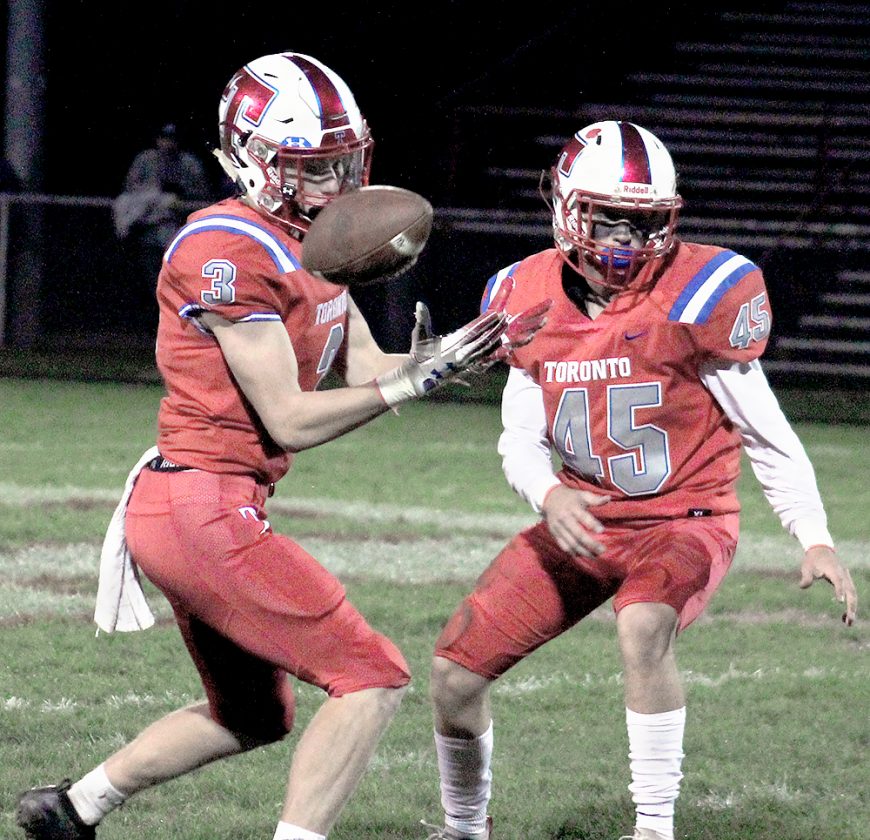 TORONTO — Faced with some adversity in the week leading up to the big showdown football game with Madonna on Friday, the Toronto Red Knights scored on the first possession of the game and never looked back in a convincing 55-14 victory over Madonna at Clarke Hinkle Field.

The game matched two teams that were looking to solidify a spot that would give them home field advantage in the upcoming playoffs in Ohio and West Virginia. The Red Knights, which had slipped to fifth place in Region 25, did that. The Blue Dons, while not eliminating themselves from that goal, find themselves falling one notch to ninth in the West Virginia Class A rankings, according to wvtailgatecentral.com, which is an accurate listing of what the official WVSSAC rankings will be when they are released Tuesday.

“That’s how we play, that’s how we’ve played all year, each and every week,” Toronto assistant coach Dave Dozier said, who was filling in for the suspended Josh Franke. “We challenge the kids to get a little bit better for every game. Tonight, everything seemed to work out for us.”

The one game Franke suspension was the mandatory result of an ejection he received the week before when his club lost at unbeaten Oak Glen. That loss dropped the Red Knights from the top spot in Region 25 to fifth. The top four teams gain home field advantage in the first round of the Ohio playoffs.

The Red Knights took control with the opening kickoff, marching from their own 46 in 10 plays with workhorse running back Garrett Dozier, the coach’s son, going into the end zone through right guard from 2 yards out. The extra point kick failed, but the Red Knights were ahead 6-0 less than four minutes into the game.

The only thing that seemed to stop the Red Knights was a fumble, a pass interception and nine penalties for 100 yards.

“Madonna is a great team,” Dave Dozier said. “They weren’t 6-1 for no reason. They have athletes on their team, and I’m confident they’re going to finish their season well. I wish them all the luck, but (Friday) we were the ones that had the upper hand, and we just kept rolling with what was working.”

The Toronto defense kept the Blue Dons bottled up most of the game, allowing only 13 rushing yards and 102 through the air.

Meanwhile, the Red Knights were clicking on all cylinders, with 458 total offensive yards that included 250 on the ground and 208 through the air.

Madonna got a break later in the first quarter when senior Jakob McCombs gathered in a Toronto fumble at the Red Knight 33. However, the Blue Dons were unable to capitalize on it, as senior Brennan Secrist was stopped just inches short of a first down at the Red Knight 24. Secrist was on the receiving end of a 7-yard pass from sophomore quarterback Santino Arlia.

The Blue Dons thwarted a Toronto touchdown on the ensuing possession when junior Thomas Sessi picked off a Caleb Leasure pass at the Madonna 1.

That reprieve was short lived, however, as the Blue Dons went three-and-out, forcing a Secrist fourth down punt from his own 3. The ball rolled dead at the Red Knight 38 and, on the first play, senior Zach Stackhouse swept left and rambled 38 yards for a touchdown. This time, B. J. Pearson split the uprights, giving the Red Knights a 13-0 lead.

Senior Brendan Matyas put the Red Knights up 21-0 when he and Leasure connected on a 59-yard pass and run for a touchdown. Garrett Dozier added a two-point conversion to make the halftime score 21-0.

“That is a good football team over there,” said Blue Don head coach Darrin Hicks, whose club now is 6-2. “We knew that going in. They are very physical, and we weren’t able to match that physicality tonight. I said early in the week they were loaded with talent, and they proved that tonight.

“I told them after the game that everything that we want is still in front of us. We just have to make sure that we come back with a positive mindset on Monday. And, I’m sure we will — I have no doubt about that.”

The Blue Dons put the second-half kickoff into play at their own 38 after the intermission, but again were stifled by the sturdy Red Knight defense. That forced another Secrist punt attempt from his own 37, but as he went into his kicking motion, the ball slipped from his grasp and fell to the ground. He recovered the fumble, but the Red Knights were knocking on the door at the Madonna 27.

Garrett Dozier, who totaled 113 yards on the ground with 23 carries, plowed his way 7 yards and JoJo Savage, who added another 91 rushing, broke away to the 1. Senior fullback Isaac Miller got his only carry of the game and bulled into the end zone. The kick failed, but the Red Knights were in command, 27-0.

Less than two minutes later, the Arlia to Secrist combination struck for 32 yards and the first Madonna touchdown. Angelo Quattrochi booted the extra point for a 27-7 Toronto lead.

The Red Knights answered quickly with yet another senior, Jesse Fulton, returning the Quattrochi kickoff from his own 23 all the way to the Madonna 2. Garrett Dozier got those other 2 yards over right guard, so 14 seconds after the Madonna score, Toronto made it 35-7.

Then, just 18 seconds later, the Blue Dons struck again with Arlia throwing to Secrist, this time for 37 yards. Quattrochi’s kick made it 35-14.

But, that was all the Blue Dons could muster, as Toronto went on to close out the game with an 11-yard scoring pass from Leasure to Stackhouse, a Savage 2-yard run and a 54-yard jaunt by Matyas.