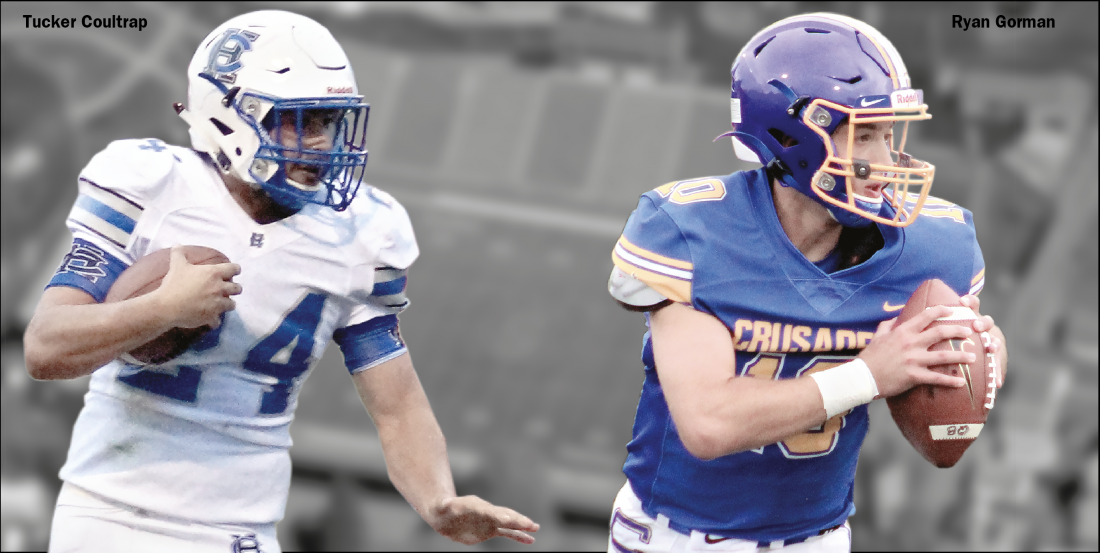 STEUBENVILLE — Two teams still holding on to playoff dreams will square off Saturday inside Harding Stadium.

Catholic Central’s Crusaders are 3-3 following their Week 6 setback at Lucas. Meanwhile, Harrison Central’s Huskies (2-4) are flying high after their huge road upset of St. Clairsville. The kick is set for 7 p.m.

This will be just the second meeting between the schools (CCHS earned a 27-24 victory in 1999). Central and Cadiz did play four times before Harrison County consolidated.

Anthony Agresta’s Crusaders currently are 16th in the Division VII, Region 25 computer rankings. Meanwhile, coach Anthony Hayes and his Huskies are 20th in Div. V, Region 17. Neither team has played what can be considered a soft schedule. Central’s three losses have come to teams (Wheeling Central, unbeaten Southern and Lucas) with a combined record of 15-3. Harrison has fallen to Garaway, Toronto, Martins Ferry and Bellaire. The combined mark of those clubs is 19-5.

“We’ve talked about the playoffs from the first week,” Agresta said. “Your team goals are always postseason oriented. It’s important to remember your end-of-season goals are achieved through your one-week-at-a-time goals. We recognize this is a big football game us. Our spirits have been up, and we’ve had a couple of good early week practices.”

The 42-35 last-minute victory at St. Clairsville allowed Harrison Central to take home the coveted Coal Bucket for the first time since 2009. Clayton Nunez hauled in a 30-yard strike from Kobe Mitchell with 30.7 seconds left for what proved to be the game-winner. He leaped between two defenders near the back of the end zone to cap a 59-yard scoring drive that took just 69 seconds.

Mitchell had a spectacular night, finishing with a career-high 365 passing yards and four touchdowns. He also rushed for 77 yards and two more scores. Thus, the junior signal-caller had a hand in 442 of Harrison Central’s 477 yards of total offense.

“We try to have open conversations with our kids,” Hayes said. “We always want everyone to know what each win means and what each loss means. We cut the season into two parts — weeks 1-5 and weeks 6-10. We talked about our disappointment in the first half, we didn’t want to finish 1-4.

“We flipped the script to weeks 6-10, and we started off 1-0. I still think the best is yet to be seen from this team. We did not play flawless last week, we still have things to address. I’m waiting on us to fire on all cylinders on both sides of the ball. Our guys will keep scratching and clawing to do that.”

In six games, Mitchell has thrown for 955 yards and 11 touchdowns. He’s completing 56 percent of his passes. Trevor Carmen leads the Huskies in receptions with 18 for 287 yards and four scores. Cale McAfee has 13 grabs, Jonathon Vermillion 12 and Nunez 10. McAfee is Harrison’s top ground gainer.

“It seems they’ve kind of turned Mitchell loose as the season has gone along,” Agresta said. “They’re spreading the field, and he’s throwing quite a bit. He’s also such a threat with his running ability. If he has a big night, we are going to have a long night. You’re never going to stop a player like Mitchell. Our goal will be limit as much as possible the things he likes to do.

“Harrison has showed they like to run the ball, but they’ve really had success spreading the field and creating opportunities for the quarterback to make plays. That’s where they have been explosive.”

The Harrison offense averages 287 yards per contest and 22 points. Defensively, it allows 309 yards and 31 points an outing.

“Central is extremely well coached,” Hayes said. “Coach Agresta is doing an outstanding job with his team. They are fundamentally sound and don’t get out of position much. Their linebackers get to the ball in a hurry, and their defensive line is quick. They also have athletes on the back end.

“Offensively, they run a lot of two tight end sets, and a good bit of that comes with a single back. Their running back (Dawson) is very good with the ball in his hands. The quarterback (Gorman) is a big, strong kid who moves well and has a pretty good arm on him. The biggest thing that stands out for us is they are fundamentally sound and very well coached.

“We try not to get caught up too much with what other teams do. Instead, we look to control what we can control — that’s our preparation and our execution. The game of football comes down to blocking and tackling. Whatever team does that the best usually comes out on top.”

Hayes pointed out this is a huge week for his Huskies.

“Winning is really hard,” he said. “So, we enjoy our victories but still try to keep things in perspective. A lot of time goes into preparing so you need to celebrate. We’ll find out this week if we can handle success. We have to answer the question of can you prepare and perform when you have been successful or do you get complacent?

“Our kids seem to be locked in and focused on Catholic Central. They’re coming off a loss, so I’m sure they will be ready to go. We need to be ready to go, also.”