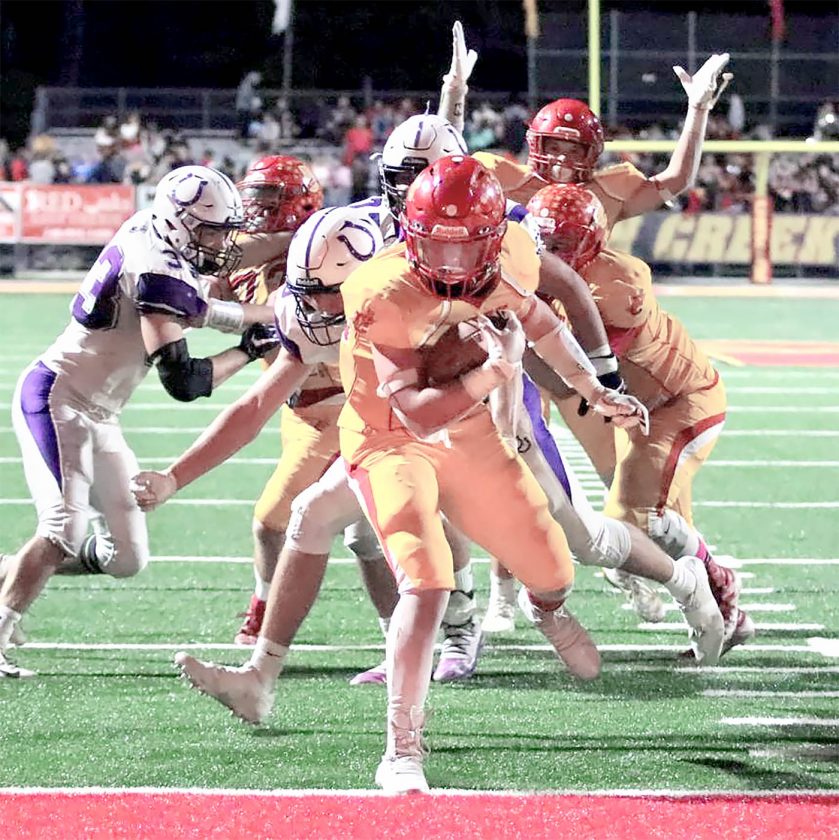 STEUBENVILLE — Week 7 of the high school football season is in the books and Week 8 has arrived. Thus, it appears the time is right to see what Drew Pasteur has to say about playoff possibilities.

Pasteur is a math professor at the College of Wooster who launched his Ohio Fantastic 50 website (www.fantastic50.net) after moving to the Buckeye State in 2008. When he was a math teacher and head athletic trainer at Fuquay-Varina High School in North Carolina in the late 1990s, Pasteur became interested in the question of whether the top small schools could compete with large schools. This interest led him to build a statewide computer ranking and then offer predictions on individual games and later playoff teams and seeds.

Ohio’s combination of heavy interest in high school football and a points-based playoff system, according to Pasteur, made it an easy decision to start his Buckeye State site.

With all that being said, here’s what Pasteur is thinking as the Ohio season hits the home stretch.

¯ Pasteur projects Big Red will finish fifth in Division III, Region 9 with a 6-3 record. Reno Saccoccia’s charges currently are 5-2 and finish with Columbus DeSales, 6-1, and 7-0 Linsly. Pasteur sees Steubenville losing by six on the road at DeSales then beating Linsly at home by 15. Should Big Red indeed finish fifth, it would open the playoffs at Chardon. New Philadelphia, Streetsboro and Aurora also would earn first-round home games according to Pasteur.

¯ Pasteur believes Indian Creek will win out and finish third in Division IV, Region 13. The Redskins could be, according to Pasteur, looking at a first round home game with Hubbard, projected to finish 6-4. Perry is picked to finish atop the region with Poland second. Cuyahoga Valley Christian Academy would land in the fourth spot. Andrew Connor and company host Beaver Local this week before closing with road games at Harrison Central and Edison.

¯ In Division VII, Region 25, Pasteur has Toronto landing in the fourth spot. Should that materialize, the Red Knights will get a first-round home game with Independence. Cuyahoga Heights, Lucas and Louisville St. Thomas Aquinas are ticketed for the top three regional spots. Toronto stands at 5-2 and will finish with games against Madonna, Barnesville and Catholic Central. Speaking of the Crusaders, Pasteur predicts they will finish 5-5 and miss the post-season.

Oak Glen continued its drive for a home game in the West Virginia Class AA playoffs by knocking off Toronto to move to 7-0. The Golden Bears are expected to be fifth in this week’s standings (the top eight teams in each class host a first round contest.) The Bears could be tested this week when they visit Cadiz to face Harrison Central.

The Bears also have road games left with winless Lincoln County and Grafton, which currently sports a 1-5 mark.

Madonna is 6-1 and should move into the top eight of the Class A rankings this week. The Blue Dons face a huge test Friday when they travel to Toronto. They close with home games against Central and Conotton Valley.

After its loss to top-ranked Fairmont Senior, Weir High is on the outside looking in when it comes to the playoff hunt. The Red Riders are 3-4 and will need to win out in order to keep their hopes alive. Weir’s final three games are against Edison, East Liverpool and Brooke.

Big Red is a member of Operation Buckeye Guard, a statewide, grass-roots movement of Ohio high school football teams showing their support for the Ohio Army National Guard and all men and women serving in the U.S. military.

The program is an outgrowth of a relationship the guard has with the Ohio Football Coaches Association. That group requested the camouflage jerseys.

Wearing the jersey was a huge honor for Big Red senior lineman Brayden Pearce, who is a member of the National Guard.

Steubenville fared a little better in that contest, posting a 21-14 victory over Akron St. Vincent-St. Mary. Of course, Big Red went on to a 15-0 record that season and captured the Division III championship.

It hasn’t been nearly that long, however, since Big Red has played a nine-game regular season. That happened in 2015 when Pittsburgh University Prep, which was listed as Steubenville’s Week 8 opponent, had to cancel its trip due to changes in Pennsylvania scheduling.

Saccoccia’s club will return to action Oct. 25 when it travels to DeSales. The teams have met six times in the past but the only regular-season meeting came in 1967. Big Red holds a 4-2 lead in its series with the Stallions.

¯ Even the heart-breaking results couldn’t take away from the performance Tayveon Crawford gave Friday against National Christian Academy. The senior tailback finished with 338 yards on 49 carries and scored six touchdowns. He now has an area best 1,586 yards for the season and 22 scores.

¯ Roman Baird had a night to remember as Madonna bounced Beallsville 33-20. The senior put together the biggest game of his career, getting 35 carries for 230 yards and a touchdown. Meanwhile, sophomore quarterback Santino Arlia, the area’s top passer, threw for 182 yards and two scores. Brennan Secrist, the top receiver in the area, hauled in six Arlia aerials while Thomas Sessi grabbed five.

¯ Kobe Mitchell put together another solid performance as Harrison Central topped Catholic Central 21-7. The junior signal caller threw for 102 yards and a score. He also ran for a touchdown and delivered an interception that halted a potential Crusader scoring drive.

¯ Trevor Fante continues to deliver big numbers for once-beaten Indian Creek. In Friday’s 21-7 victory over Martins Ferry, the senior ran for 155 yards and scored all three Redskin touchdowns. “Trevor gets better with the more carries he gets,” Connor said.

¯ For the past couple of seasons, Oak Glen has relied heavily on its passing attack. This year — not so much. In Friday’s 44-7 win over Toronto, the Golden Bears ran for 322 yards. Hunter Patterson collected 146 and Paxton Shuman added 113. Oak Glen has compiled more than 1,700 yards on the ground through the first seven weeks.

¯ Seth Richardson had a huge night as Buckeye Local dropped a tough 21-20 verdict to Beaver Local. He completed 13 of his 26 passing attempts for 232 yards and a touchdown. Five of his completions went to Brian Palmer Jr.