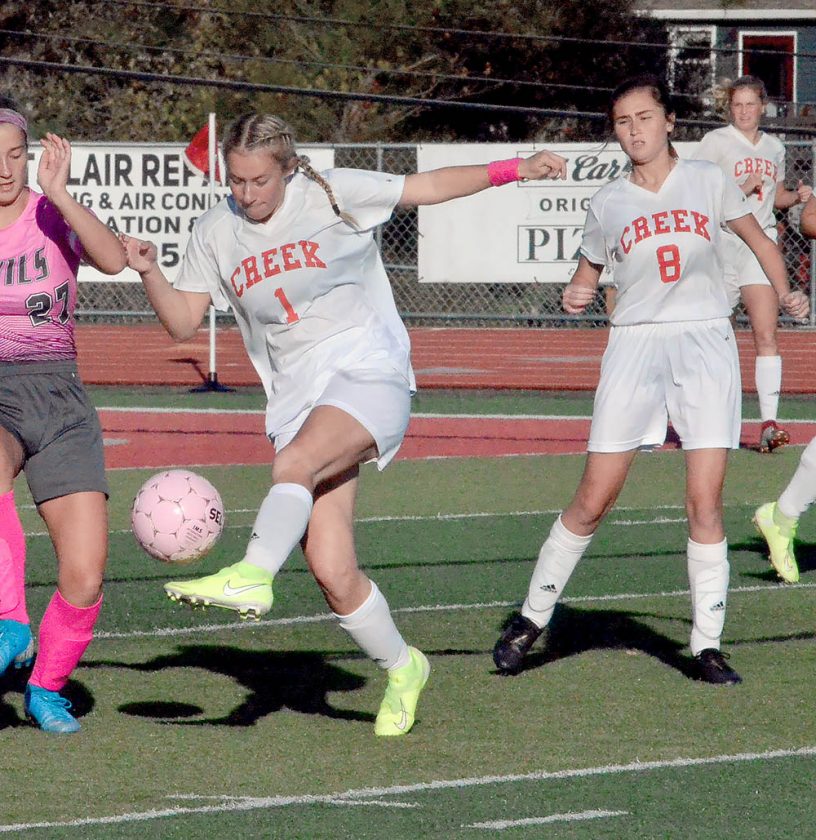 ST. CLAIRSVILLE — Survive and advance is the common theme when it comes to tournament time, especially when it’s a single-elimination format.

St. Clairsville did just that Monday night with a 1-0 victory over Indian Creek in an Ohio Division II girls East District match on the artificial pitch inside Red Devil Stadium.

With the narrow win, the fourth-seeded Red Devils (10-5-2) move on to Thursday’s sectional final against No. 5 Steubenville, which prevailed 4-1 over 11th-seeded Morgan, also on Monday night. Thursday’s match also will be played in St. Clairsville at 6 p.m.

“They played a heckuva game. It was a different defense than what we saw in the opening game. It was a prevent-sort of defense,” St. Clairsville head coach Wes Stoner said of Indian Creek. “We didn’t get a lot of (scoring) chances, but neither did they at the other end. I wasn’t too worried that way.

“Luckily, we got one (goal) and didn’t have to worry about overtime. Obviously, they man-marked Macy (Malin), which is smart on their part. They had a good game plan for us.”

The contest, which was played in the midfield for the most part of the initial 40 minutes, was scoreless until St. Clairsville broke through late in the first half.

Sophomore Alyssa Bodkin took a nifty pass from junior Ariel Ott in the 36th minute and one-timed the ball past Indian Creek goalkeeper Makenzie Taylor and into the twine.

“It was absolutely huge for us to get this win with someone other than Macy Malin scoring,” Stoner stressed. “As many goals as we can get from girls not named Macy Malin, the better we’re going to be. We’ve got several girls with several goals, but not a ton (of goals).

“Alyssa made a good run on the throw-in. Ariel flicked it in with her head and Alyssa got through the defense,” Stoner explained. “It was a good effort on both of their parts.”

The goal came on St. Clairsville’s fourth shot of the match. Indian Creek didn’t register its first until the 37th minute.

The Redskins did put a couple of shots on goal in the waning moments, but nothing that Jaeda Nowak couldn’t handle. The junior keeper stopped all six shots for her eighth shutout of the season, including a try by Rileigh Gualtiere with less than 30 seconds remaining.

The seventh-seeded Redskins (11-6) saw their season come to an end.

“My girls came out and played a good game. It was one of the best games they’ve played all year,” Indian Creek head coach Joe Lewis assessed of his team’s performance. “I don’t think anybody out there had a bad game. They all stepped up really well.

“We started off the season with a young team. We only had five returning players,” he added. “So, the first game of the year (the 5-0 loss to St. Clairsville) was a learning curve. I think they really improved a lot during the season, and they showed it by the way they played today.”

¯ A pink-colored ball was also used during the match.