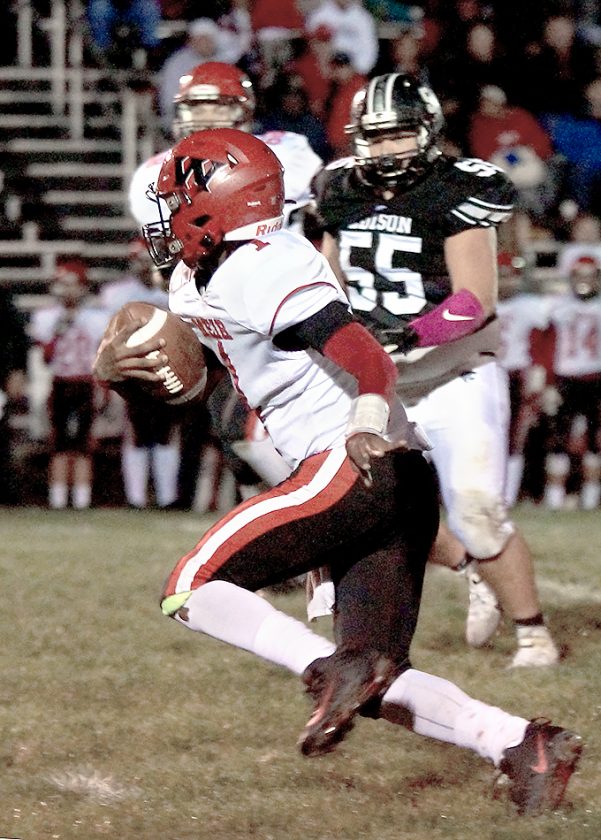 RICHMOND — With all margin for error gone coming off back-to-back losses, Weir High needed someone to lead the way Friday night.

Not surprisingly, that someone was Mr. Do-It-All Sebastian Spencer. The senior finished with six total touchdowns three different ways and accounted for 221 total yards in a 53-7 win over the winless Wildcats.

“This was very much-needed,” Spencer said of the win. “We lost two games in a row, so we knew needed a really good win to keep us in it and get momentum for these last few games of the season. The focus is on us and what we do. We’re making sure we execute on every play so we can try to make the playoffs.

“It felt great to see my teammates smile, that’s everything. As long as we’re putting points on the board, I don’t care who it is (that scored) or how it comes.”

The Red Riders got back to the .500 mark at 4-4 and kept their playoff chances alive with the win. Spencer was the one to lead way with the situation the way it is comes as no surprise to his coach.

“I was happy with the way our kids responded with out backs against the wall,” Tony Filberto said. “We’re evened up now, and we’ll see what happens the rest of the year. (Spencer) is a special player. What he does leads the football team. Our team rallies around him. As he goes, the rest of the team goes, and he really set the tempo.”

Spencer scored touchdowns on the first two offensive snaps for the Red Riders, a 51-yard pass play to Zak Wypasek and a 25-yard run after a blocked punt gave the offense the ball right back for a quick 12-0 lead. He added a 36-yard scoring run before the end of the first half, before scoring on a 12-yard run, delivering a 30-yard scoring pass and catching a 22-yard touchdown in the second half.

In total, he finished 4 of 5 passing for 124 yards and two scores, 75 yards and three scores on seven carries and one catch for 22 yards and another score.

Weir High — due to scoring so quickly on its possessions and the Wildcats (0-8) using long, time-consuming drives to use up the clock –took just 10 offensive snaps in the first half. Four of those ended up in the end zone for a 26-7 halftime lead.

“It was definitely different,” Spencer said of the lack of possession time in the first half. “Those quarters felt long with us being on defense. The ability of us to score quick on offense was good.”

Freshman tailback Jamari Bass produced the other first-half touchdown, a 39-yard score that answered the Wildcats’ lone points in the second quarter. He finished with 75 yards on just six carries.

“He is just going to get better and better,” Filberto said. “He’s going to grow. He’s about 175 (pounds) now as a freshman. He gets better every time he touches the ball. His maturity level seems to rise. This was great ballgame for him.”

Edison, led by several drive-extending plays by senior quarterback Noah Woods (9 of 12, 70 yards, one touchdown), went on an 18-play, 72-yard scoring march to pull within five at 12-7 early in the second quarter, capped by Woods connecting with Logan Hanchin for a 16-yard touchdown. Unfortunately for O’Brien and company, that was the lone highlight of the night.

“In the first half, we were able to do some good things offensively,” Edison head coach Shane O’Brien said. “We had a couple long drives, and I felt like we executed our game plan pretty well in the first half. Noah had a really good game in the first half. He’s a great athlete for us, and we’re glad to have him back from injury.”

Things got out of hand quickly after the break.

The Red Riders got the opening kick of the second half. On the fifth play, they added to the lead when Spencer lofted a deep pass to Anthony DiMatteis, who caught the ball off a tip and walked into the end zone.

On the ensuing kickoff, the ball bounced and no Edison players picked it up, allowing the Red Riders to pounce on it and take right back over at the Edison 22. Three plays later, Spencer knifed his way through the defense to make it 40-7 not even three minutes into the third quarter.

Woods was picked off by Elijah Gillette three plays into the ensuing drive. Two plays later, DiMatteis threw his lone pass of the game for a touchdown to Spencer, making it 47-7.

“It’s unfortunate we had a couple turnovers early in the second half,” O’Brien said. “Our defense was put in a bad position. The turnovers definitely swing momentum. We were trying to come out and get some momentum in the second half, and when you turn the ball over early it deflates you a little bit.”

In total, Weir High forced four turnovers with interceptions by Gillette and Brodie McUmar, and a fumble recovery by Jordan Brueck, who also blocked a punt. The Red Riders held the Wildcats to just 113 yards of total offense.

“Our defense was really good in the second half I thought,” Filberto said. “In the first half, we let them keep the ball too long and keep the ball away from our offense. We came out in the second half and did a good job. The turnovers will really hurt you in any football game. There’s nothing worse than turning the football over. We ended up with a short field a couple times and it’s a momentum picker-upper on our side.”

Weir High: Returns to Jimmy Carey Stadium for homecoming against 4-4 East Liverpool, a 49-8 winner over Buckeye Local, on Friday night once again looking to stay alive in the Class AA playoff race.